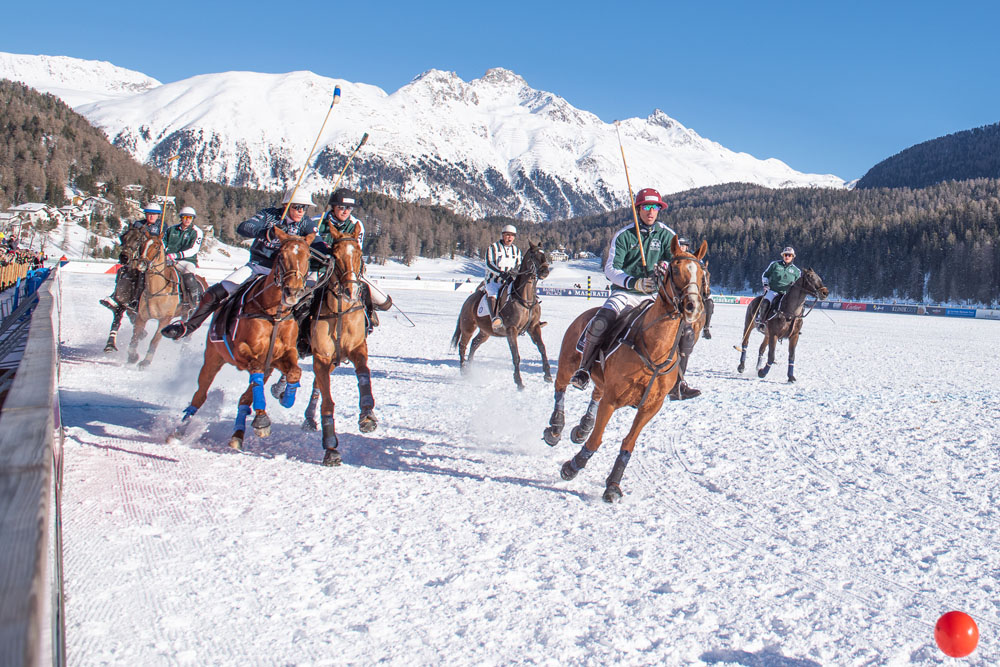 Work has begun on the installations for the Snow Polo World Cup St. Moritz

Even though the ice on Lake St. Moritz did not begin to build up until late this season, the 36th edition of the Snow Polo World Cup will take place as planned. The ice is building up fast moreover, it is of excellent quality – in three weeks, it will have reached the thickness needed to carry out this prestigious event, which, generating a revenue of some CHF 12 million, is of great import to the Engadine. At this point, nothing stands in the way of thrilling polo-playing complemented by a varied social programme! As ever, access to the polo grounds is free.

Quality and thickness of the ice undergo continuous monitoring – through complex measurements and tests – by the experts of the St. Moritz lake committee. Current readings show that the ice sheet will withhold the stress of erecting the infrastructure of the event. Work will commence on Friday, 10 January 2020. The next three weeks will see the building of the polo field, measuring some 20,000 square meters, the numerous tents, stands and feeding conduits. The CEO of the Snow Polo World Cup St. Moritz, Reto Gaudenzi, explains: «Getting all of the installations ready on time is a massive show of strength in such a short time, it can only be achieved thanks to the tireless effort of everyone involved and their well-rehearsed teamwork.»

At the Snow Polo World Cup St. Moritz, the first and foremost “high-goal” polo tournament on snow, four top- flight polo teams will be competing for the coveted de GRISOGONO Trophy, with matches held from Friday through Sunday. Last year’s winner, Melissa Ganzi, will once again enter the competition as captain of the Team Badrutt’s Palace, with Nic Roldan, reputed to be the best player in the USA, at her side. The Team Azerbaijan Land of Fire, last year’s darling of the public, is expected to up the ante on their game to reach the final this time. Expectations are high as to the actions of St. Moritz newcomer and captain of Team Maserati, Kutlay Yaprak. He can count on the Swiss player Fabio Meier and the snow polo old hands Adrian Laplacette Jr and Valentin Novillo Astrada. Zhanna Bandurko and Valery Mishchenko will be returning to the Engadine as captains of the Team de GRISOGONO. They can count on the expertise of Robert Strom and Max Charlton, who have both played on snow numerous times. For a full team line-up, consult stmoritz.com/tournament-2020/teams.

The Schlitteda parade, steeped in tradition, is set to become one of the highlights of the social event. Once upon a time, at this event, the young men would invite their sweethearts for a romantic ride across the snow- covered Engadine flats on their beautifully decorated horse-drawn sleighs. This year, they will entice the audience at the Snow Polo World Cup. As in previous years, the «Polo Piazza» will be alive with the music of different bands, and a choice of food and drinks for old and young will be on offer.

A line-up of international media, as well as some 15,000 polo enthusiast from around the globe, are expected to attend the event to experience the legendary atmosphere of this unique event staged at an altitude of 1,800 metres above sea level from 24 to 26 January 2020.

Demand for the VIP tickets of the different categories is at the same high level as in the years before. The Chukker Club tickets are the perfect choice for those who prefer it cosy. The treat for CHF 60 includes a blanket-covered seat on the grandstand, a glass of Perrier-Jouët champagne and a canapé. VIP tickets give access to the VIP tent offering fine catering by the Badrutt’s Palace hotel and a number of other treats. The VIP tickets also include a blanket-covered seat on the VIP grandstand, where guest will be served champagne and warm drinks. Equally sought-after are the tickets for Saturday night’s Baku-Moritz gala only a few tickets are left.

Tickets may be bought online at www.snowpolo-stmoritz.com/tickets/ or at the ticket counter at the event.

Full information on the programme can be found at 2020/program/.