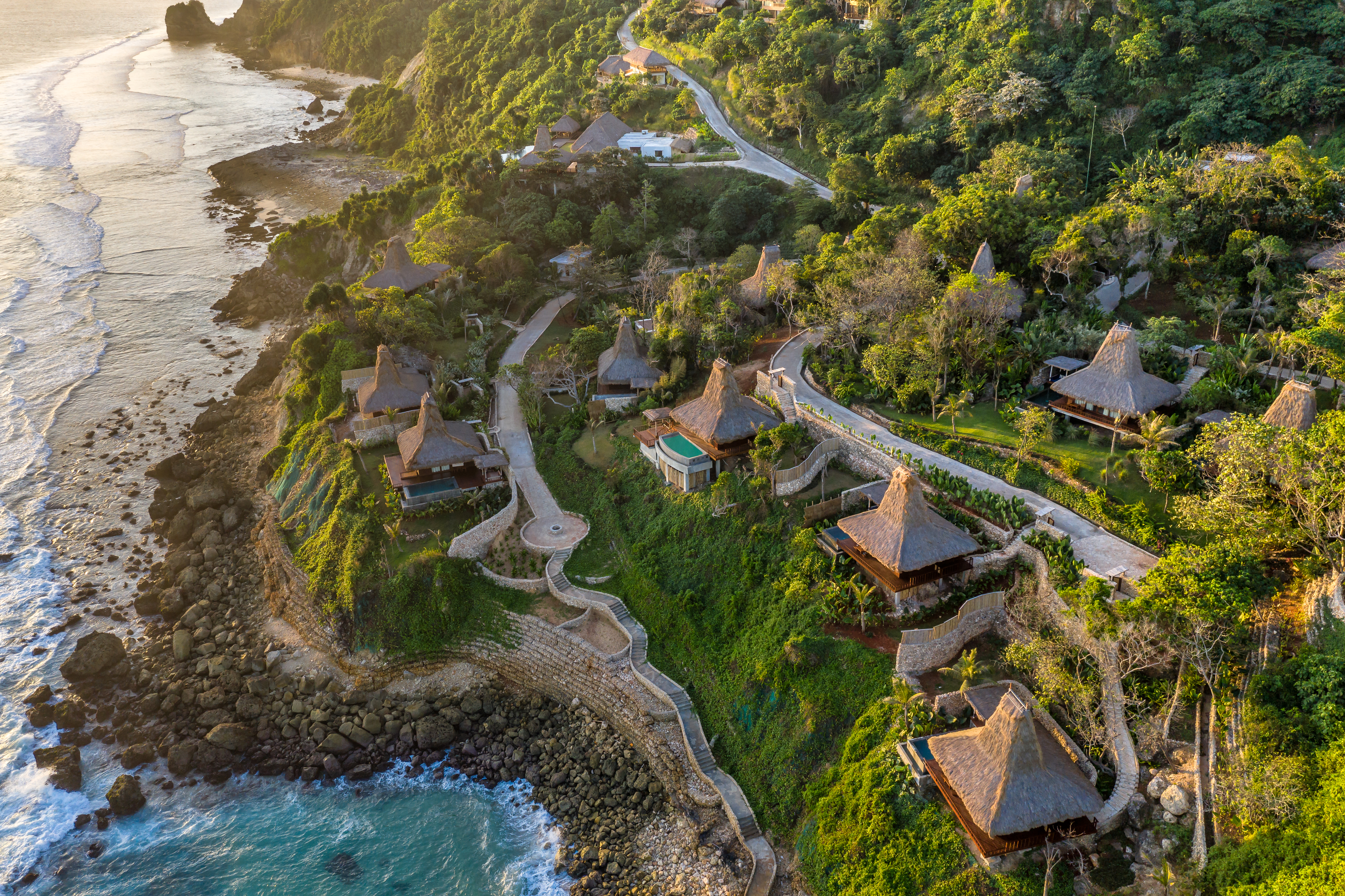 The eastern Indonesian island of Sumba is beautiful and relatively untouched, which led Sumbanese businesswoman Jenny Tan to realise it has great potential to become a luxury tourism destination. Among its charms include undulating limestone hills, lush greenery, clear waters and its interesting cultural heritage. Yet, Tan also believes it is important that tourism grows sustainably and in harmony with the land.

In line with that, she launched her inaugural hospitality project, Lelewatu Resort & Spa, a 4,780m2 property on a 10ha site, designed by respected Indonesian architect Popo Danes. “Tan’s brief was to create a resort that would highlight the local culture of Sumba and become an icon within the island,” says Danes, whose design concept was inspired by the dynamic topography of the island, and the rich culture of Sumba. “The location, landscape and climate influenced the master plan for the resort. The steep, hilly terrain naturally separates each of the individual structures. “We avoided cutting any of the natural trees by raising most of the structures on stilt foundations, which also helps with air circulation,” adds Danes. 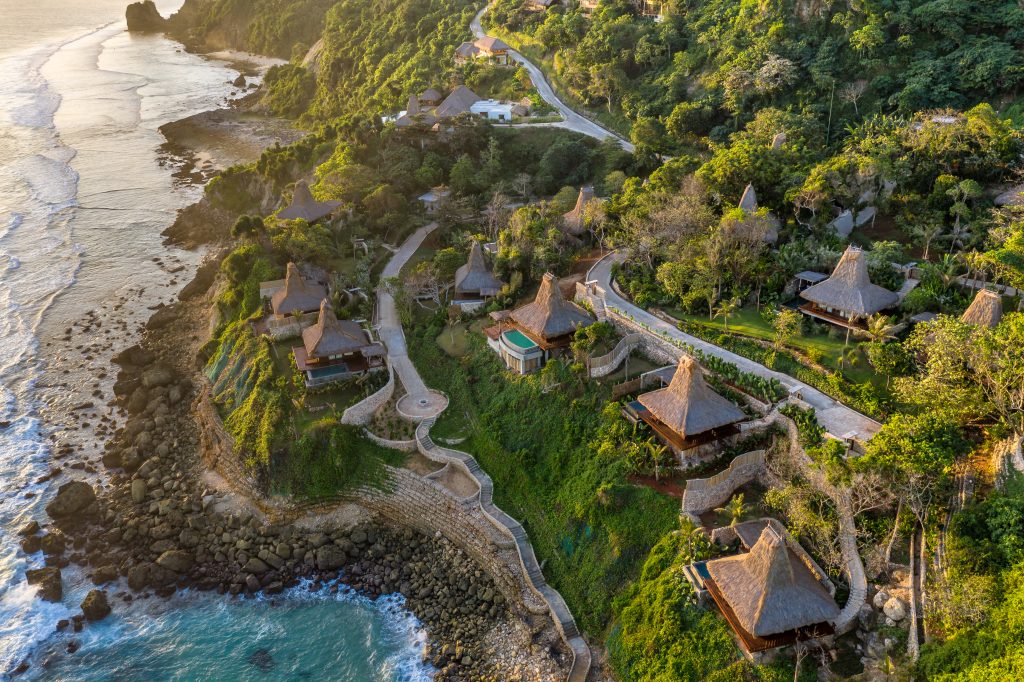 The design concept of the resort was inspired by the dynamic topography of the island, and the rich culture of Sumba.

The typical, traditional Sumbanese house is called an umambatangu, and has a square floor plan and hat-like pitch roof.

As part of the master plan, he created five zones within the site. In the first zone is the reception area. The second zone contains public areas with event spaces. Most of the villas are in the third zone. The spa, and the larger villas and houses such as the Cliff Hanger villa are located in the fourth zone. The public facilities including the dining room, bar, and main swimming pool are in the fifth zone. The architecture of the resort’s public areas, its six guest villas and two guest houses were inspired by the layout and vernacular of the traditional Sumbanese Village. 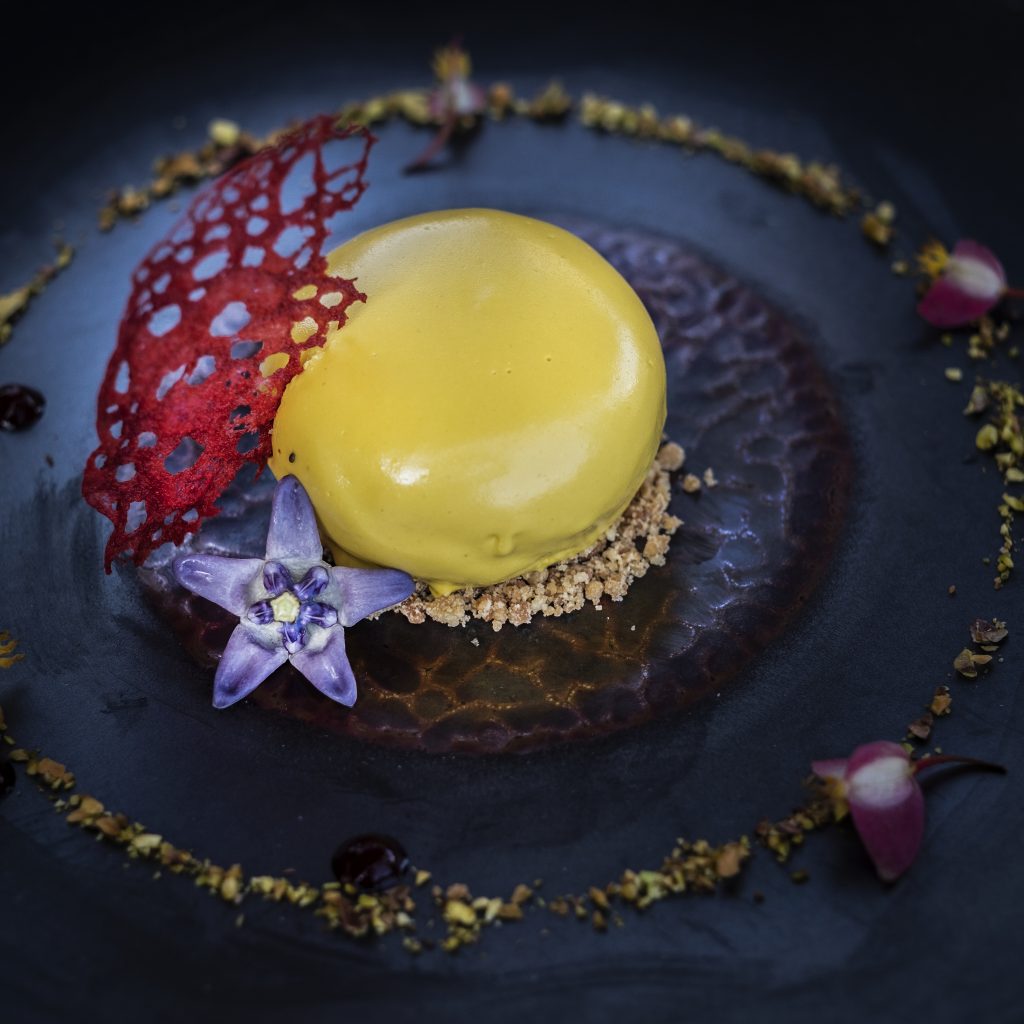 These are typically composed of several, pavilion style uma mbatangu (peaked houses) with square floor plans, and pointed, hat-like pitched roofs made of thatched alang-alang, and separated by courtyards to create an effective passive cooling system. Sumbanese uma mbatangu are typically built on elevated sites, with houses set in two or more rows on the flanks of a central plaza. Each house has two entrances, one to the left and one to the right. 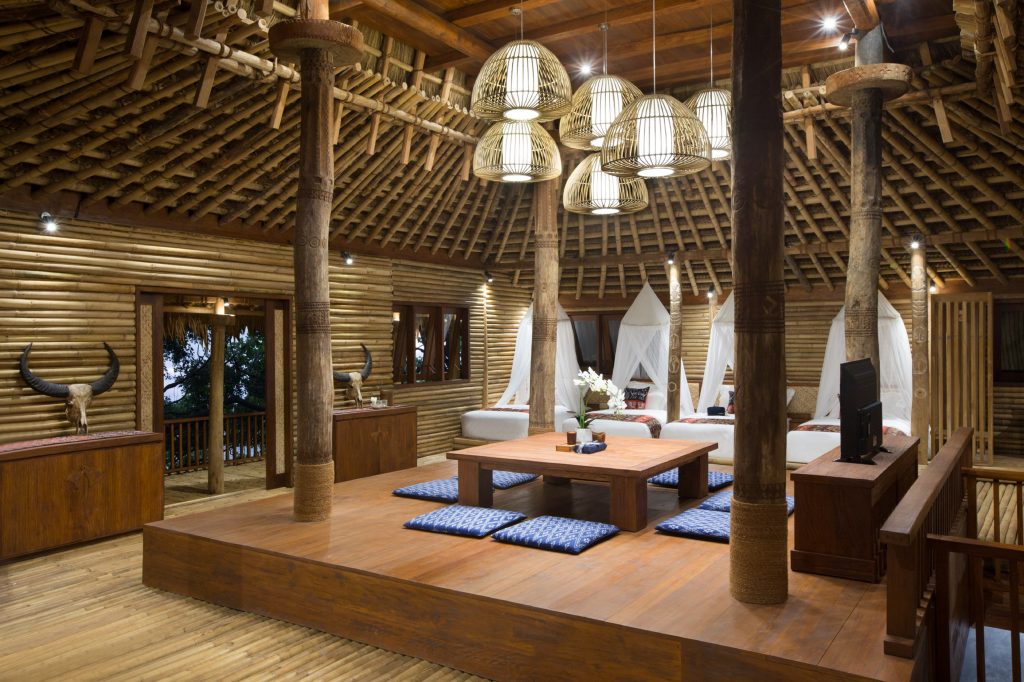 In the style of typical Sumbanese houses, the interiors of the villas have two entrances to allow for cross ventilation as there are no windows. 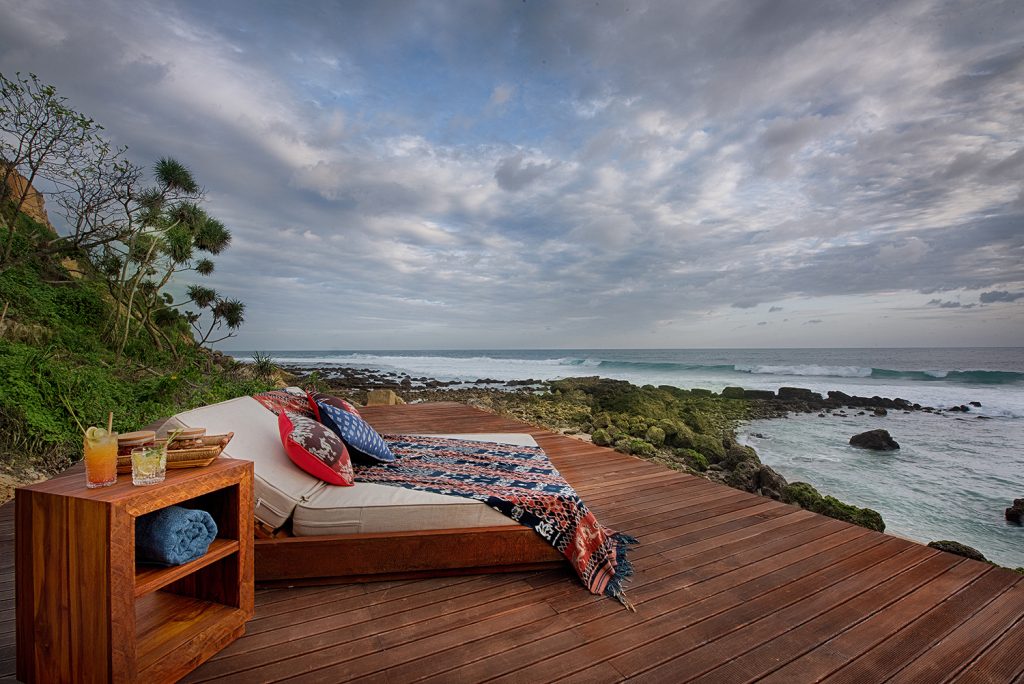 A sea-facing deck with pool and sun loungers in the Royal Honeymoon Villa. 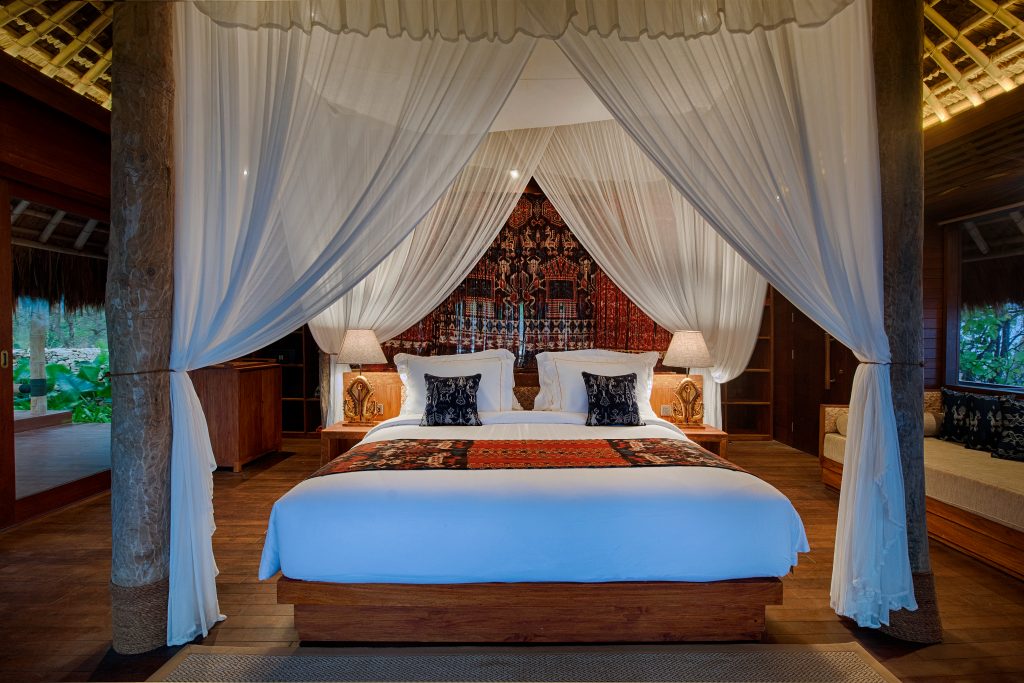 The bedroom in the Royal Honeymoon Villa is furnished with locally-made, one-of-a-kind Sumbanese textiles. 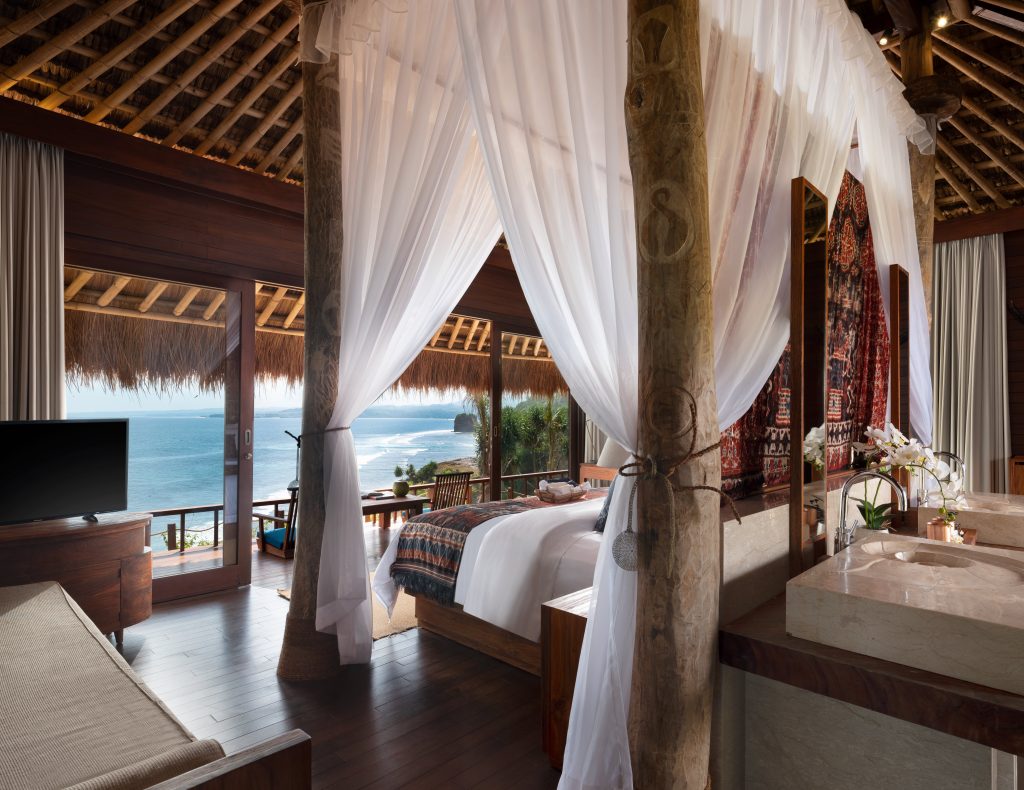 Locally sourced woods were used for the floors and fitouts

The houses are windowless, but enjoy cross ventilation through small openings in the walls. Danes replicated much of these traditional features but updated the interiors with more elegant furniture and finishings, and added luxurious, modern conveniences. The trees and plants on the site serve as privacy screens and further enhance passive cooling, while the wide overhanging roofs help to keep the heat of the sun out of the living and sleeping areas of the guest accommodations. “I used the basic structural design of the Sumba traditional house and developed it to become the luxurious and comfortable villa-style guest abodes for the hotel,” says Danes. “The materials used to build the villas – wood, bamboo and alang-alang for the thatched roofs – were all locally-sourced and assembled in the traditional way by Sumbanese craftsmen.”

Local woods and marble were used for the flooring, and the furniture and lamps were all locally crafted too. Iconic Sumbanese textiles were included in each of the villas to give the interiors a strong, local identity. “The Sumbanese use their textile weavings to pass on messages from past to present to future generations, so each Sumbanese textile is one of a kind and deeply personal to its maker. Each piece follows a distinct pattern but also reveals the distinctive marks of the weavers and the villages where they are produced,” says Danes. 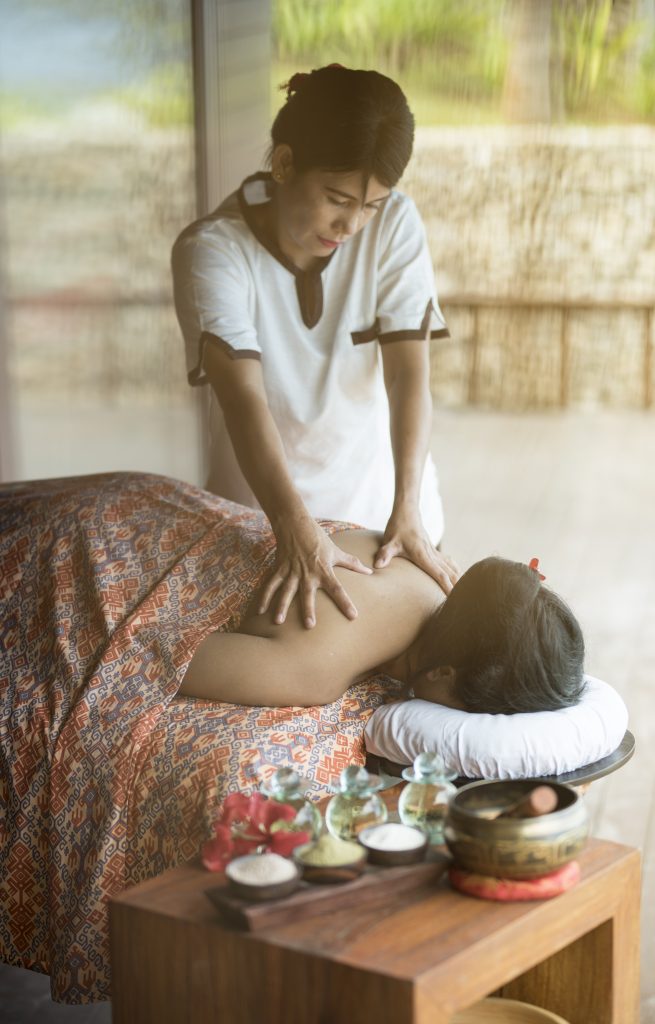 Building the structures on extremely steep and hilly terrain was challenging, as was designing good circulation so guests can travel to the public areas with ease. “In response to the topography, we set the uma mbatangu structures on stilts, and built pathways on the more gently sloping areas so guests can easily walk along or ride their golf carts through these paths,” says Dane. “While I am very happy with the buildings we created, the most unique feature of this resort is the site itself, because the structures, set within their environment, creates a set-up that truly mirrors a traditional Sumbanese village. “The architecture and interior design of Lelewatu Resort & Spa is Sumba culture refreshed and translated into a sophisticated, modern holiday destination,” he adds. 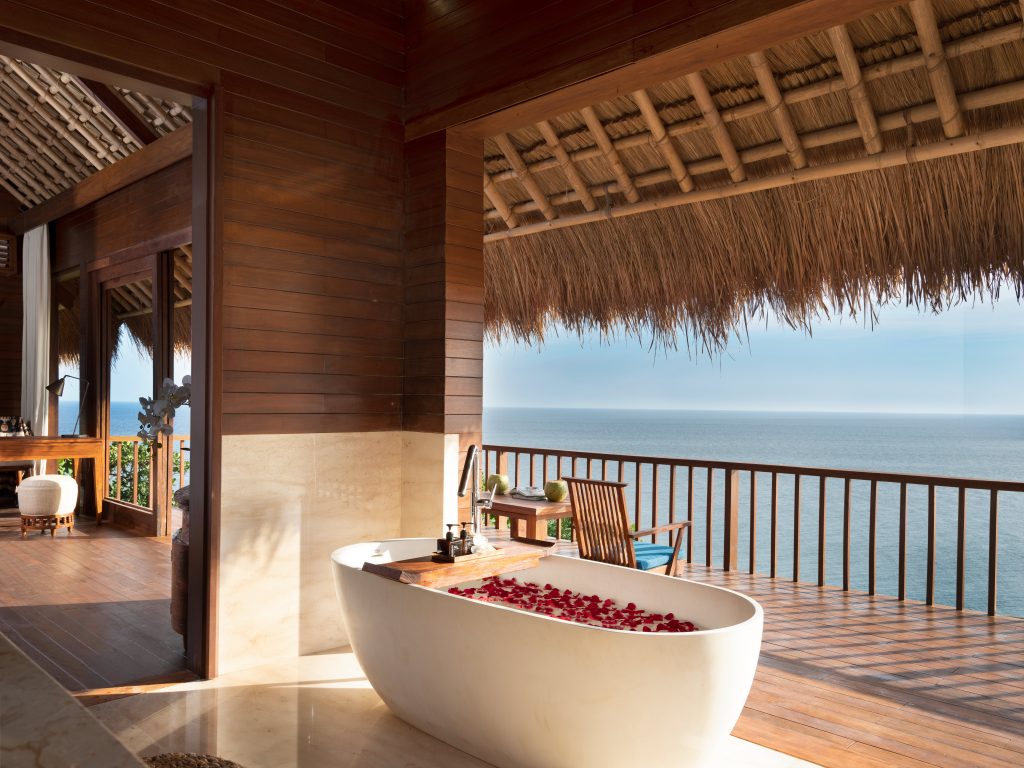 A freestanding bathtub is one of the contemporary elements in the villa bathroom.

To learn more about Sumba Tourism Business watch below: