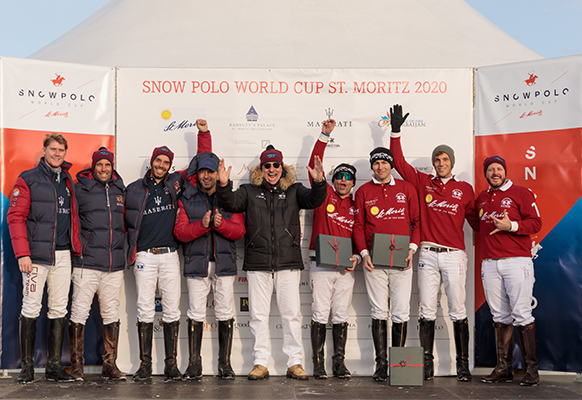 – The world’s pre-eminent ‘high-goal’ polo tournament raised the bar once more – three days of the finest polo enthused the audience. –

For the first time in their history, Team St. Moritz won the Snow Polo World Cup St. Moritz. In the nail-biting deciding match, captain Valery Mishchenko and his team ultimately prevailed over Team Azerbaijan Land of Fire, taking home a deserved victory. The world’s foremost ‘high-goal’ tournament was a big success with the public once more, attracting more than 18,000 spectators over the three days of the games. The dates for the next tournament have been set: 29 to 31 January 2021.

With a 4 : 11⁄2 victory over Team Azerbaijan Land of Fire, Team St. Moritz took the crown at the tournament for the first time. In the 3rd place final, last year’s tournament winner Team Badrutt’s Palace Hotel with captain Melissa Ganzi had to admit defeat against Team Maserati’s superior force, finishing the game at the score of 71⁄2 : 5. Both of Sunday’s finals offered great entertainment: on the compact surface, all teams played at their best, keeping the audience on tenterhooks right to the final bell.

Perfect conditions on all three days of the tournament

In 2020, the world’s only ‘high goal’ tournament on snow lived up to its reputation once again: Some 18,000 spectators eagerly watched six games of fast-paced, top-class polo-playing between Friday and Sunday. Throughout, the weather and snow conditions were superb. Although Lake St. Moritz began to freeze over only late in the season, the organisers still succeeded in preparing a first-rate polo field. “The local teams once more did a fantastic job,” praised Reto Gaudenzi, founder and CEO of the tournament, “They laboured away all but day and night for a fortnight with just one goal in mind: to provide the best possible conditions for the audience, the players and the ponies. That is why, for me, they are the true heroes of this weekend.”

The tournament set off on Friday with two qualification games. Team Azerbaijan Land of Fire, playing in perfect sync, triumphed in the first match of the day, the President’s Trophy, winning hands down against Team Badrutt’s Palace with 8 : 4. The second game, the Hatecke Challenge, was equally a straightforward matter. Team St. Moritz, studded with top-rate players, triumphed over Team Maserati, counting the only Swiss player Fabio Meier among its ranks, to a final score of 6 : 21⁄2.

Saturday’s first game, with the Maserati Cup at stake, saw Sunday’s finalists St. Moritz and Azerbaijan Land of Fire testing the waters against each other for the first time – the thrilling game closed at 6 : 51⁄2 with a narrow victory for Team St. Moritz. The Deutsche Bank Wealth Management Challenge, Saturday’s second game, also ended with a close win – the scoreboard showed 41⁄2 : 3 in favour of a fiercely playing Team Maserati against Team Badrutt’s Palace Hotel.

The Snow Polo World Cup St. Moritz, hosted for the 36th time, did not fail to set the highlight of the sporting and social polo winter season once again. Amidst the breathtaking setting in the Engadine mountains, the 18,000 spectators enjoyed the unique mix of hospitality, a dash of luxury and spectacular sport offered on and off the field.

Another highlight on the social calendar is the select «Baku Moritz Night», hosted at the Badrutt’s Palace Hotel on Saturday evening. The «Baku Moritz Polo Award» in recognition of outstanding achievements in the field of the sport of polo was presented for the third time. The 2020 award went to the Brit Oliver Ellis. Besides having been a professional player for three decades, the leading international umpire and head umpire at the Snow Polo World Cup St. Moritz, was a member of the English polo team, tournament director at the reputed Cowdray Park Polo Club and polo manager at the legendary Guards Polo Club. Reto Gaudenzi, Vice-President and CEO of Evviva Polo St. Moritz AG, Elchin Guliyev, President of the Equestrian Federation of Azerbaijan, Dr Piero Dillier, Vice-President of FIP, Birgit Hügli-Hermann, owner of the Polo & Luxury publication and initiator of the award, as well as Richard Leuenberger, Managing Director of the Badrutt’s Palace Hotel, are on the award committee.

Gaudenzi closed the games with his time-honoured “See you next year!”. The 37th Snow Polo World Cup St. Moritz will be held from 29 to 31 January 2021.