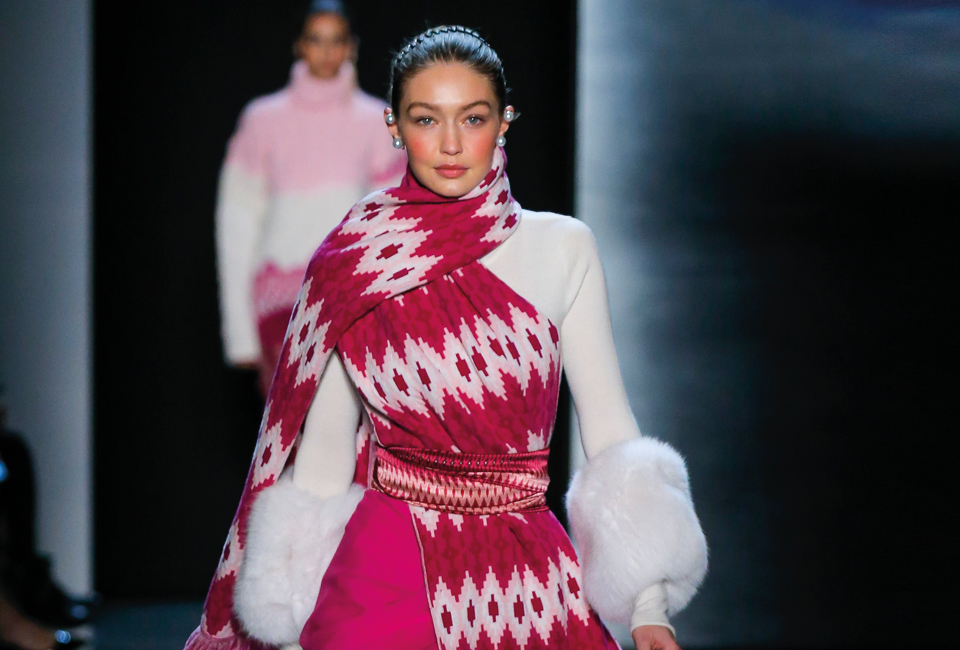 In 1926, an economist named George Taylor made an intriguing observation about women’s fashion: hemlines seemed to rise and fall with the stock market. As Taylor’s theory would have it, economic downturns correlate with longer hemlines, while economic booms send skirt hems sky-rocketing upwards to more playful and confident lengths. Though the validity of this so-called “hemline index” is disputed – especially now that fashion leaves far more room for diversity – there is an unequivocal fact hiding at its core: in one way or another, fashion is always tied to economic cycles.

How this relationship works isn’t always obvious, nor as measurable as the distance from hemline to knee. Rather it manifests as a mood, or a shift in the types of pieces consumers are inclined to invest their money in. It makes sense that, in times of hardship, clothing leans to the classic and versatile. In boom times, there’s a willingness to break away from basics, as we’re liberated to spend on pieces that are less practical and more frivolous.

This season, as the days and nights draw colder, our clothing choices need not darken with them. The economic outlook and the fashion forecast can both be described by one word: optimistic. And that leaves plenty of room for luxury to re-emerge in bright and unexpected ways. From fabrics to philosophies, here’s how to embrace winter’s new opulence.

If you feel like giving your classic camel coat some time off, now’s your chance. In lieu of time-honoured trenches and practical puffers, this winter’s collections take the boldness up to statement level. What kind of statement, exactly? Not the kind that’s compelled to shout, but rather the kind that brings colour – and a little joy – to people’s lives when the days are short and the wind is biting.

As such, the best statement coats of the seasons are those that are vibrant yet versatile: embroidered wool jackets, western-inspired patchworks and quilted coats brightened by metallic threads.

The classic plaid coat is lifted out of a slump of muted tones and reinvigorated by an injection of colour: royal purple at Versace, vivid red at Michael Kors and Maryling. Elsewhere, playful details are a thumbed nose to safety and practicality – like the shaggy wool yarn cuffs on an already-vibrant red coat at Cividini, or a burst of tactile Mongolian shearling on the bottom of a Prabal Gurung vest. 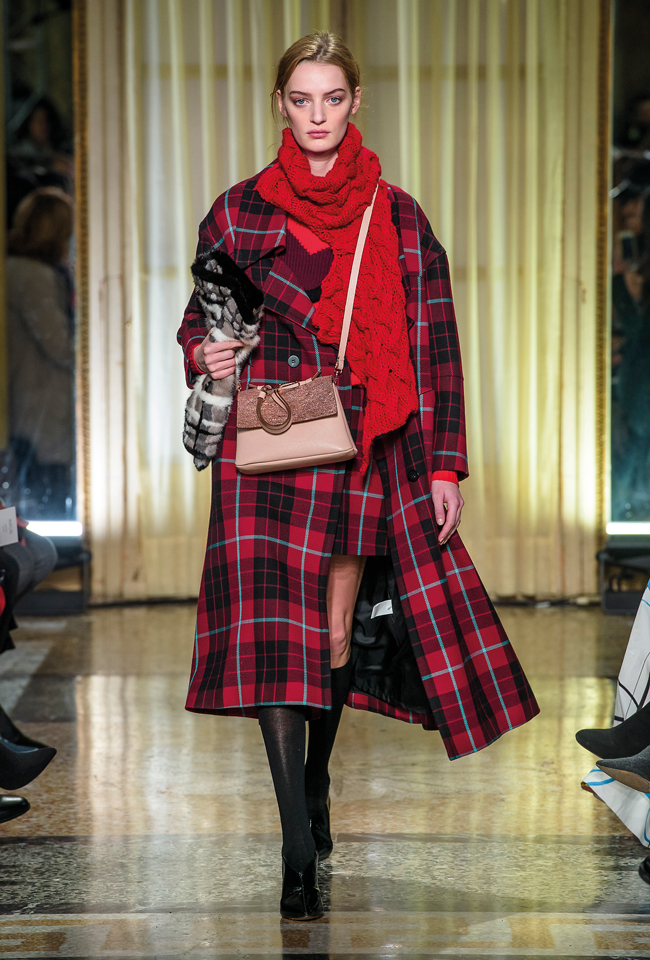 Cultural interactions are always being forged in the world of fashion and design. But with the emerging markets of Asia, the Middle East, Latin America and Africa set to overtake Europe and the US in global fashion sales for the first time, perhaps the blurring of East and West is more appropriate than ever.

Prabal Gurung approached the theme with both exuberance and sensitivity. His collection was inspired by two female-dominated societies from the East: the Gulabi Gang, India’s pink-wearing human rights ™ vigilantes; and the Mosuo, a matriarchal Chinese tribe who express empowerment through their vibrant and intricate garments. Gurung’s cross-cultural nod included sari-like shapes, a vivid colour palette, and sumptuous silks.

Meanwhile, New York designer Laura Siegel is working with Indian artisans for hand-weaving and embellishing, while her alpaca knits are sourced directly from Peru. Her winter collection is one that seamlessly brings these globetrotting inspirations together with a cool and contemporary vibe.

There are many ways to interpret this winter’s ethnic inspirations, but above all is an appreciation for traditional fabrication techniques, for handcrafting, weaving, and the kind of detailing that’s luxurious not because it’s loud, but because it takes time and care to create.

Shifts in fashion trends aren’t limited to outside appearances. Take the question of ethics: consumers have become far more conscious of where their garments come from and how the production process impacts the environment around them.

Merging sustainability with high fashion has become a new type of luxury – one that meets both the desired level of aesthetics and exclusivity as well as heightened ethical standards. Choosing to be swathed in the kind of luxury that’s also conscious is a statement in itself.

Marine Serre – one to watch on the fashion scene after winning the coveted LVMH Prize in 2017 – is a new player in this space. Her winter collection includes several fluttering pieces patched together from upcycled silk scarves. To keep the sustainability momentum, Serre and her team reportedly stockpiled over 1,500 vintage silk scarves to use in the production process.

Eye to the future

Trading no-frills for frivolity may be a bit of a leap, especially for the lover of clean lines and wardrobe classics. But, as this winter shows, there’s a sweeping stretch of middle ground to be explored. And at the heart of it are pieces too bold to be considered timeless, but still classic enough to linger in one’s wardrobe for seasons to come.

In the wake of improved economic health, designers have stepped out from the shadows of uncertainty and dared to liven things up with lavish fabrics, vibrant colours, and whimsical details – all enacted with an appropriate degree of sophistication and restraint.

On the runway at Marine Serre’s show, a lively silk-scarf frock summed things up by optimistically brandishing the word FUTUREWEAR on the hem. Thankfully there’s no need to wait: with winter’s new vision of luxury bursting off shelves now, that future is already here. 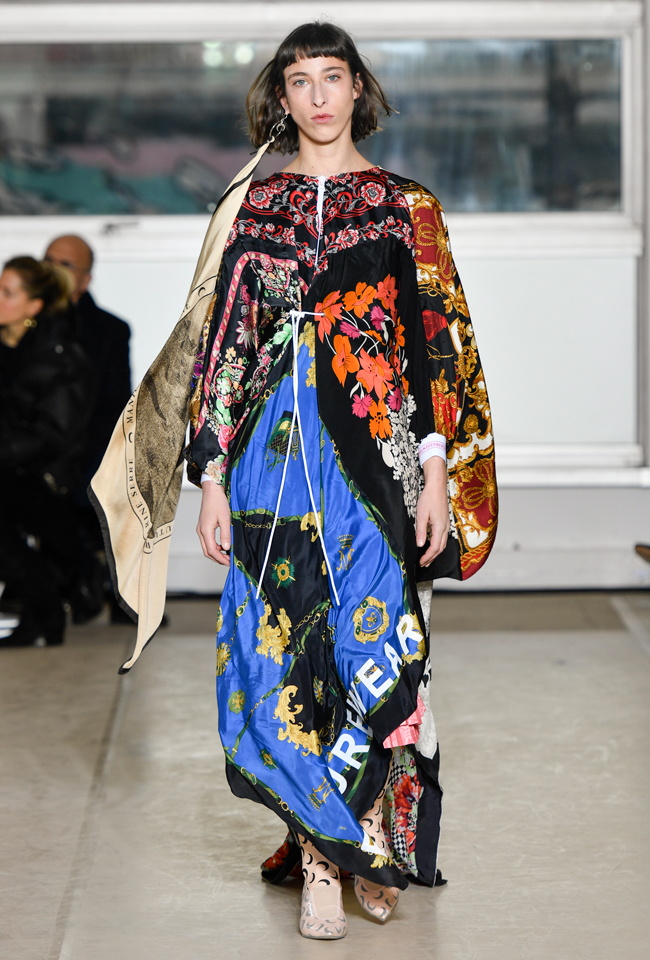