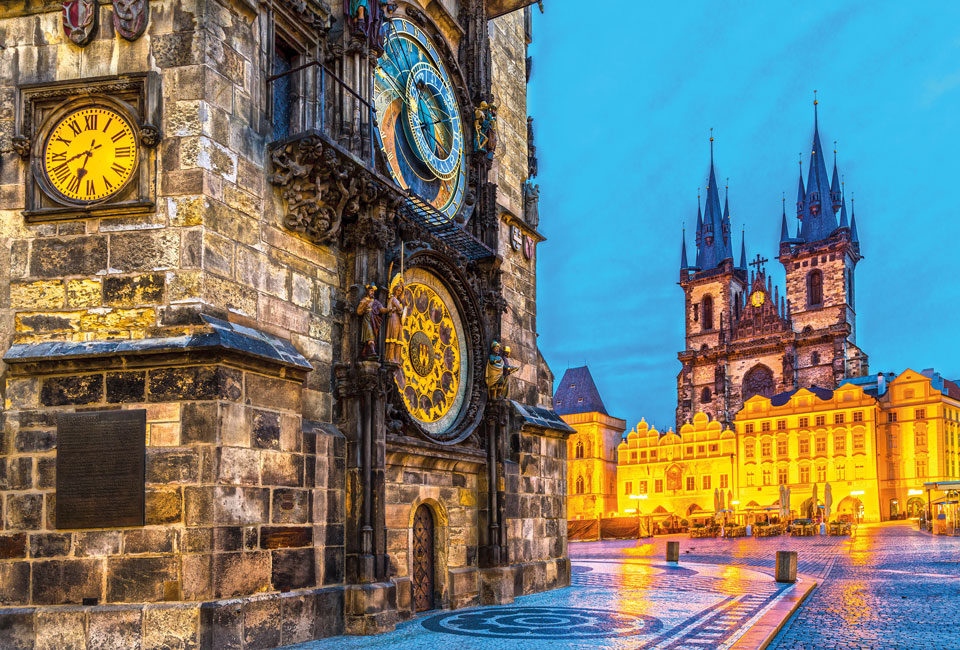 A Perfect Stay in Prague

Wenceslas Square, Charles Bridge and Prague Castle are among the worldfamous landmarks that attract millions of tourists to the Czech capital each year, yet charming modern restaurants, luxury boutiques and great hotels are firmly positioning the city as a cosmopolitan hotspot for the international traveller.

Prague’s only international airport, Václav Havel, has no direct train or underground connection to the city centre, though a 30-minute Uber ride to most popular hotels usually costs less than 450 koruna (around £15), with traditional taxis being slightly more.

Prague is home to some of Europe’s most stunning hotels. Chief among them is the much-loved art nouveau-style Hotel Paris Prague. The 5-star hotel (see p40) was declared a historical monument in 1984, reflecting the rich heritage of this Prague landmark. Over the years the hotel has welcomed the great and the good of politics and culture, including renowned Czech art nouveau painter and decorative artist Alphonse Mucha. On the dining front, the hotel’s Sarah Bernhardt Restaurant is a favourite with locals and tourists alike and serves up outstanding French and Czech cuisine in sophisticated surroundings, which pay homage to Mucha’s muse, Sarah Bernhardt. For unrivalled views over the city, try the truly unique Tower Suite, which contains the highest hotel tower in Old Town and gives residents a 360-degree view of central Prague, including Prague Castle, Petřín Hill, Prague Old Town and Prague New Town. The convenient location of Hotel Paris Prague allows guests to easily access the delights of Prague’s Old Town, namely the Klementinum.

Heralded as one of the world’s most beautiful libraries, the baroque library in the city’s vast Klementinum complex is a stunning piece of baroque architecture and wonderfully illustrates Prague’s rich history. Now home to over 20,000 books, the library was established in 1722 as part of a Jesuit University and features highly detailed ceiling frescoes, painted by artist Jan Hiebl. The sprawling Klementinum, which took more than 170 years to construct, also houses the iconic
Astronomical Tower and the unique Meridian Hall, all open to the public on guided tours.

Old Town isn’t just for history buffs with the prestigious Pařížská Street, which contains dozens of exclusive ready-to-wear designer stores, alongside jewellers, watchmakers and chic multi-brand boutiques, going from Old Town Square to the Jewish quarter of Josefov. Although Pařížská (Paris in Czech) is a charming and decidedly luxury area, it was originally supposed to be the centre of a major development project modelled around the Champs-Élysées in France, but somewhat thankfully, a lack of funds stopped this project and allowed Pařížská Street to retain its bijou feel. Located just minutes from the exclusive Pařížská shopping district stands the design-led Hotel Josef. This 4-star, 109-room establishment is not only popular with fashionistas looking to buy new season styles, but thanks to the Prague Writers’ Festival it hosts, the literary set descends on Hotel Josef every summer. Expect to find bright and open-plan rooms and, if on the higher floors, great views over the city.

As one of only three restaurants in Prague to possess a Michelin star, Field Restaurant rightfully deserves the reputation it has built up since opening its doors in late 2014. A relative newcomer to the fine-dining scene, Field has developed an innovative, if somewhat experimental menu, which outclasses the majority of long-established eateries in Prague. The menu is seasonal and varies accordingly, and diners can always expect locally sourced and creative dishes in keeping with the ‘Free Range Dining’ concept pioneered by the restaurant.

Expect starters like snail, shallot, watercress and garlic, alongside visually stunning main courses including pigeon, salsify, apple and truffle. While, of course, the food at Field is delightful, the atmosphere in the establishment itself adds an extra layer to the experience.

A Scandinavian, minimalist décor is found throughout Field, with projectors displaying an array of nature-inspired
visuals across the ceiling.

No trip to Prague would be complete without visiting at least one of the city’s famed squares. New Town’s perpetually popular Wenceslas Square has come a long way
since its time as a medieval horse market in the Middle Ages and is now more known for shopping, nightlife and
the National Museum.

The 4-star Falkensteiner Hotel Maria Prag is a five-minute walk from Wenceslas Square and close to the main train station in Prague, making it a good choice
for visitors to the square but less so for those looking to make the journey to major landmarks. On the plus side, Falkensteiner Hotel Maria Prag is set amid the streets of New Town where lively restaurants, bars and cafes are part of the attraction. When you’re out and about in Prague save some calorie space for a helping of the traditional street food, trdelnik. This delicious creation originally dates back to the 18th century and features rolled dough wrapped around a stick, grilled and topped with sugar and walnuts.

Prague is much loved for its vibrant nightlife, but in some parts of town the exuberance can run long into the night; it’s worth choosing your hotel district wisely!

For instance, although the 5-star Corinthia Hotel Prague is popular with business travellers, it’s also well liked by guests who want to escape the hustle and bustle of central Prague. Located in the south of Prague in the Nusle district, the Corinthia’s Executive Club on the 22nd floor not only offers expansive views but gives those staying in Executive rooms complimentary refreshments throughout the day.

The Apollo Day Spa is a real stand-out in the city and offers a range of treatments for residents who want to relax after a long day travelling around Prague. The nearby and surprisingly upscale 4-star Park Inn Prague in the city’s scenic second district is close to both a metro and tram stop, with on-site restaurant, RBG Bar & Grill, serving up Czech classics and is a solid dinning option in its own right. 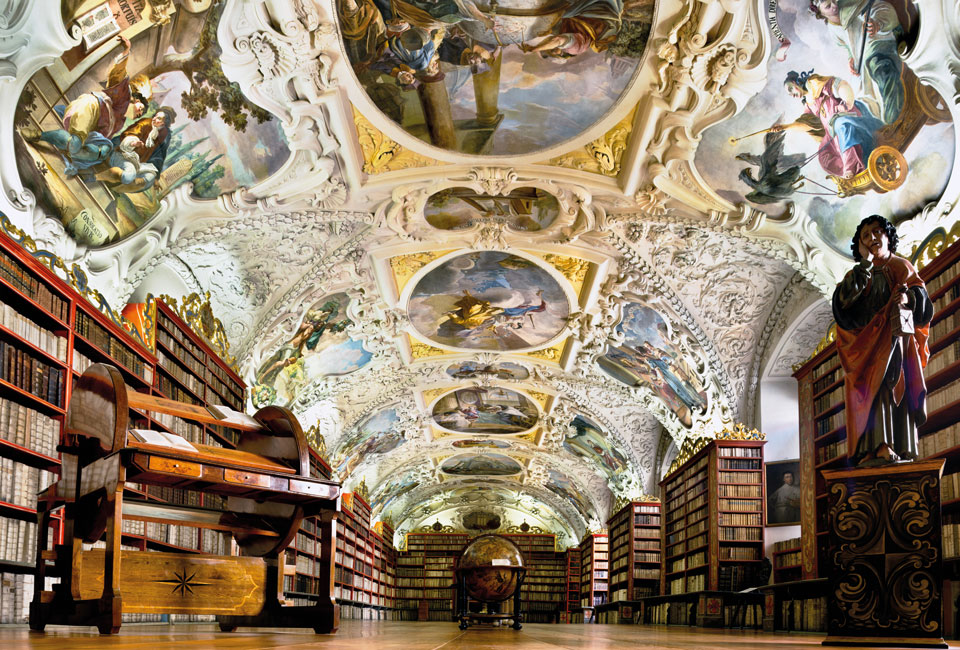 Magnificent frescos adorn the ceiling of the baroque library

Across the Vltava river that divides Prague in two is the Hradčany district, home to one of the largest castles in the world, and Lesser Town just below. Lesser Town is a hillside part of Prague and is home to narrow streets, indulgent restaurants and many of the cities embassies. Nestled between the US Embassy and Irish Embassy sits the 16th-century Alchymist Grand Hotel and Spa.

The Alchymist Grand has a palatial interior, complete with antique furnishings, hand-painted wallpaper and a luxury subterranean spa. With only 45 rooms, the hotel retains an intimate feel and is a well-appointed base to explore Charles Bridge and the innumerable other historical landmarks in the area.

Around 10 minutes walk away from the hotel is classic Czech cuisine at its best, U Modré Kachničky (Czech for ‘The Blue Duckling’). As its name would suggest, wild
game features heavily on the menu, alongside a carefully curated wine list that offers a considerable number of Czech specialties. The kitchen is helmed by self-taught chef Michal Váňa, whose previous experience includes preparing meals for the King of Sweden and the King of Norway, and strives to give old recipes a modern update. Foodies looking for a more international experience can indulge in the nearby Augustine Restaurant. Housed in a former 13th century Augustinian monastery, the aptly named Augustine Restaurant has been designed in keeping with the historic nature of the structure, whilst also integrating sophisticated and modern design elements, such as the floor-to-ceiling windows that overlook a tranquil terrace.

After sampling the best cuisine Prague has to offer, Cloud 9 Sky Bar & Lounge, situated atop the Hilton Prague, offers up a huge range of exciting cocktails, accompanied by expansive views over the Czech capital. In the evening, Cloud 9’s bar menu offers a mix of traditional vodka, rum and gin-based cocktails, as well as their signature Bohemian Legacy, which celebrates the 10th anniversary of the bar by mixing GoldCock Single malt whiskey, homemade beer syrup, dark beer and Carpano Antica formula vermouth.

It’s hard to miss the DOX Centre for Contemporary Art in the eclectic Holešovice district. A giant 42 metre long wooden and steel airship called Gulliver has been installed across to top of the DOX centre, which functions as a meeting space and reading area at the museum. Modelled after a 20th century zeppelin, this Martin Rajni-designed structure is juxtaposed with the modern and slightly austere buildings that house DOX.

While it’s worth a visit to just see Gulliver, DOX offers a compelling exhibition programme, including London Biennale-award winning Czech multimedia artist Daniel Pešta, who investigates issues of social determination in his show.

Prague’s countless winding streets and welcoming cafes and bars make meandering through this city a pleasure. Even during peak tourist season, there are so many little known treasures to visit that crowds steer clear of, with few cities so effectively showcasing their historic roots and forward-think future. While the Kingdom of Bohemia was dissolved in 1918, its vibrant spirit still lives on in modern-day Prague. 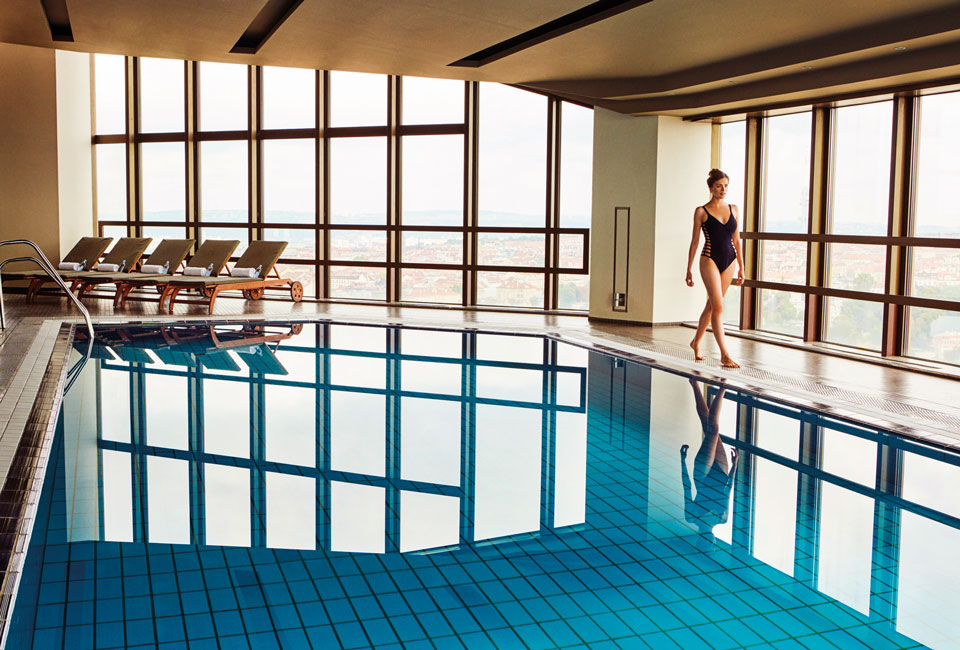