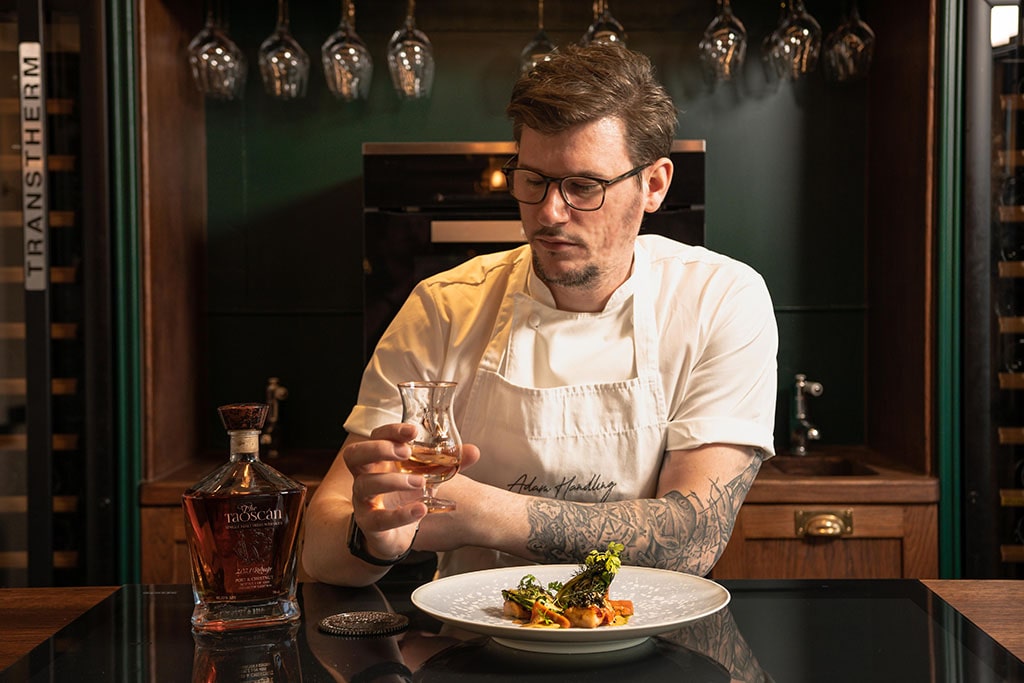 Scottish culinary wizard Adam Handling has teamed up with The Craft Irish Whiskey Co., the most awarded new whiskey brand of 2021 and creator of the most expensive whiskey in the world, to create a St. Patrick’s week pairing menu that will have you positively salivating at the prospect of a tasting.

For one week only, the acclaimed chef will present an exclusive Celtic inspired dish paired with The Craft Irish Whiskey Co.’s brand new release; The Taoscán, at his Michelin-starred restaurant, Frog by Adam Handling in London’s Covent Garden.

From 17th – 24th March, Frog by Adam Handling will feature ‘Celtic Cousins’, a pairing dish bringing together Scottish lobster and Irish whiskey. The Celtic Cousins which features a smoky Scottish lobster with carrot and BBQ pak choi is designed to perfectly complement the unique notes and aromas of The Taoscán; the world’s first and only Tawny Port and French Chestnut finished whiskey, which will be available exclusively in select venues from St. Patrick’s Day (17th March).

The partnership was born after Adam met Jay Bradley, founder and CEO of the Craft Irish Whiskey Co. and the pair shared their love of crafting and fusing flavours together to produce bold, innovative, and mouth-watering creations. In each of their disciplines, both men have been receiving much recognition.

Adam has a number of impressive awards under his belt, including Scottish Chef of the Year, British Culinary Federation’s Chef of the Year, Chef of the Year in the Food & Travel Awards. He was (and still is) the youngest person to be one of the Caterer’s ‘30 under 30 to watch’ in the 2013 Acorn Awards. Voted for by both the public and a selection of esteemed industry judges, Adam was named Restaurateur of the Year in the British GQ Food and Drink Awards 2020, before earning his first Michelin star at his flagship restaurant, Frog by Adam Handling, in 2022.

Meanwhile, The Craft Irish Whiskey Co. continues to amass awards for its ultra-rare releases. In 2021, the company became the most awarded new whiskey brand of the year and to date it has over twenty awards across both Taste and Design for four of its ultra-rare whiskey releases and this year its inaugural release The Devil’s Keep won the category for Best Irish Single Malt from The World Whiskies Awards.

Speaking on the partnership, Adam Handling, owner and chef, The Adam Handling Restaurant Group, said: “I think the synergy between The Craft Irish Whiskey Co. and myself, in as much as we understand the classics, and we really do appreciate them, is all about making things the best they can possibly be. And I think perhaps the rule book needs to be torn up. Because if we constantly look at the rule book and only make something within those parameters, we’re never going to make anything that is out of the ordinary.

“The port and chestnut flavours of The Taoscán are incredible, it really works and nobody else has ever done it before. I’m very excited to pair this with a smoky lobster dish. The two together are phenomenal.

“Me being Scottish, I’ve never worked with an Irish whiskey, but we are Celtic cousins at the end of the day and Taoscán is Gaelic for dram, so I think what a wonderful way to celebrate St. Patrick’s Day, which we’re turning to St. Patrick’s Week with a glass of the best Irish whiskey I’ve ever tasted.”

Jay Bradley, Founder and CEO of The Craft Irish Whiskey Co. said: “We have long been fans of Adam Handling’s work. When it comes to flavour and innovation Adam is an absolute genius. We pride ourselves at The Craft Irish Whiskey Co.in challenging convention and pushing boundaries so I feel Adam and I are very similar in that regard. To be able to bring this pairing menu to life to mark the arrival of our new whiskey The Taoscán is just fantastic. When I tasted his menu with our liquid it was just a magical fusion and I’m excited to hear what his diners think.”