Team Cartier around Italian Rommy Gianni took home the coveted Cartier Trophy at the Snow Polo World Cup St. Moritz 2018 repeating last year’s win. In a thrilling and fiercely fought Final, in the end, it was Team Cartier who succeeded to take the win, narrowly, to a score of 4 1/2-4 over Team Maserati, who played on a par with the defending champion. The tournament’s 34th edition clocked in at 18,500 spectators, a new record. The crowds enjoyed six exciting matches over the course of three days, each game exhibiting polo played at its best – in its 2018 edition, the world’s only high-goal polo tournament on snow lived up to its reputation once again. The date for the next tournament has been set: 25-27 January 2019.

In its 34th year, the Snow Polo World Cup St. Moritz once again proved to be the social and sporting highlight of the polo winter season. The spectators enjoyed excellent entertainment both on and off the field. The stands were packed on Saturday and Sunday, while the visitors in the polo village enjoyed the mix of hospitality, a touch of luxury and a sports spectacle against the spectacular backdrop of the Engadin mountains. Photographers, as well as journalists and camera teams from all corners of the world, mingled with the crowd more than 200 members of the press signed up for accreditation – yet another record.

Moreover, thriving business put a smile on the organisers’ faces – a whopping 1,400 bottles of Perrier-Jouët champagne were sold on the lake over the three days. Thanks to the many seasoned employees, everything around the tournament was perfectly organised and ran without a hitch – the games as much as the catering, hospitality and evening events – delighting visitors, sponsors, partners and suppliers alike. 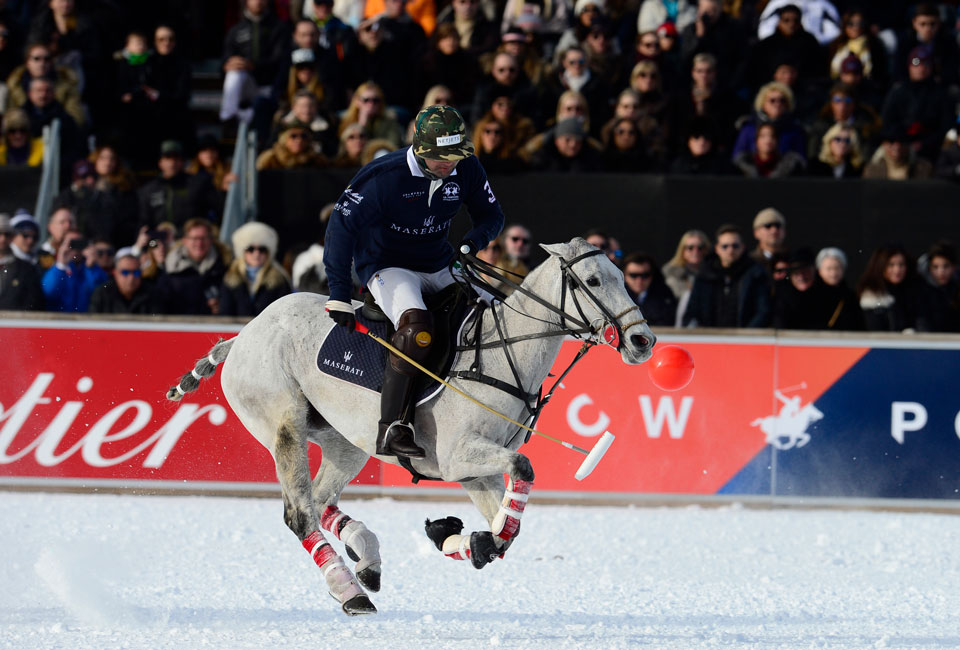 The weather and snow conditions on all three tournament days were perfect.

Despite the challenging weather just days ahead of the event, the organisers, with the help of some 100 volunteers, were able to prepare an impeccably groomed field. “The local helpers have outdone themselves to make this happen, especially in the final two weeks before the tournament,” says a delighted Reto Gaudenzi, founder and CEO of the tournament. “They worked literally around the clock to make sure the players and their polo ponies find perfect conditions. Their work has greatly contributed to making this a first-rate event.”

Two qualification games kicked off the Snow Polo World Cup St. Moritz on Friday 26 January. An evenly balanced Team Cartier won the first match against Team Badrutt’s Palace with a commanding 5-2, taking home the Winston Cup. The second game, on the other hand, was a tighter call. In the end, Team Maserati won the Carlton Hotel Challenge with a narrow win of 2-1 1/2 against the novices at the Snow Polo World Cup St. Moritz, Team Azerbaijan Land of Fire, who showed an excellent play.

Saturday’s first game, with the Maserati Cup at stake, turned out to be the encounter of what would be Sunday’s finalists, Teams Cartier and Maserati, with Team Cartier winning the thrilling game narrowly with 3 1/2-2. Playing fearlessly, Team Azerbaijan Land of Fire came out victorious in the second game of the day, winning the Deutsche Bank Wealth Management Challenge with an overwhelming 9-4 against Team Badrutt’s Palace.

After four high-class games played under bright blue skies, the bell rang for the tournament’s social highlight. On the “Baku Moritz Night”, the polo family and the four teams congregated in the packed ballroom of the Badrutt’s Palace Hotel and later continued the party until the early hours of the morning at the hotel’s own King’s Club.

The “Baku Moritz Polo Award”, recognising outstanding achievements in polo, was awarded at the gala night for the first time. The winners of the prize in 2018 were, for one, Maria Lia and Luis Garrahan, publishers and editors of Polo International, the long-time undisputed leading specialist polo magazine in the world, as well as Dr Adrian Laplacette for his outstanding achievements in the field of polo both in Switzerland and in Azerbaijan. The committee that decided on the recipients of the award consists of Reto Gaudenzi, Vice-chairman and CEO of Evviva Polo St. Moritz Ltd, Elchin Guliyev, President of ARAF, the equestrian federation of Azerbaijan, Dr Piero Dillier, Vice-president of FIP, the world governing body of polo, Birgit Hügli-Hermann, owner and publisher of Polo & Luxury magazine and the person who gave the impetus for the award, as well as Yves Gardiol, CEO of Badrutt’s Palace Hotel. 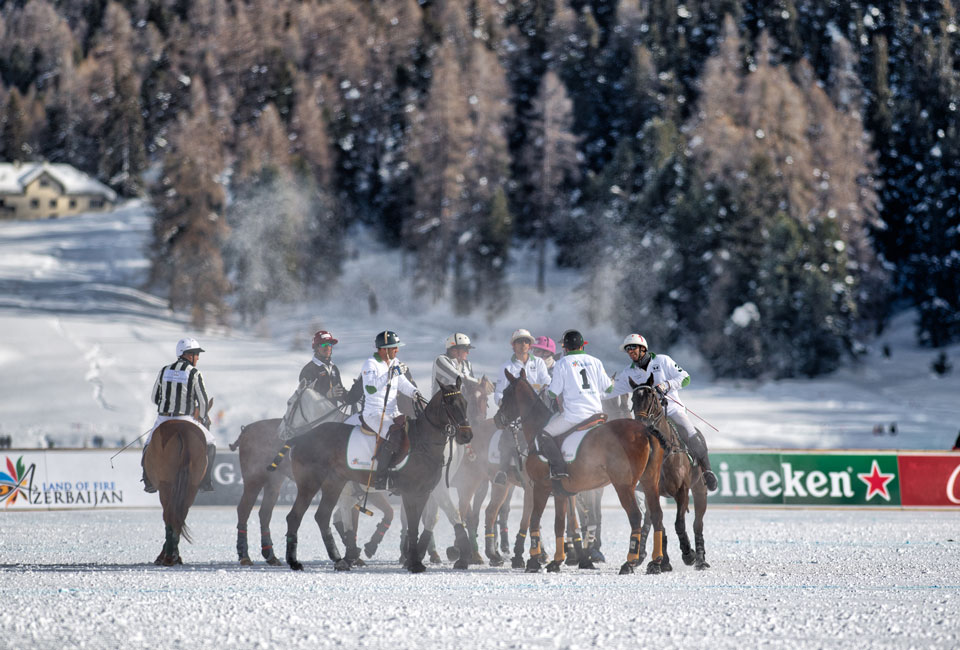 Thrilling matches and plenty of sunshine on Sunday

Sunday noon saw Team Badrutt’s Palace defeated in the La Martina Cup, the subsidiary Final, losing against an outstanding Team Azerbaijan The Land of Fire – the team who made their debut on snow turning out the be the tournament’s surprise package. The two finalists, Team Cartier and Team Maserati, hadn’t kept their keen ambitions to the title a secret in the previous games. So, it came as no surprise to anyone following the game that the Cartier Trophy was more fiercely fought than ever. In the end, Team Cartier managed to take the win in extremis. It is the third consecutive win for Captain, Rommy Gianni and a legendary seventh win for his teammate, ‘The Prof’ himself, Chris Hyde.

As the tournament came to a close after the Final on Sunday, 18,500 spectators had enjoyed superbly well-played polo as well as St. Moritz’s legendary hospitality. Applauded by a delighted audience, Team Cartier’s Dario Musso was named Most Valuable Player – who also took home the trophy for the Best Playing Pony. The accolade of the Best Playing Patron, with a prize sponsored by Deutsche Bank Wealth Management, was awarded to tournament winner Rommy Gianni.