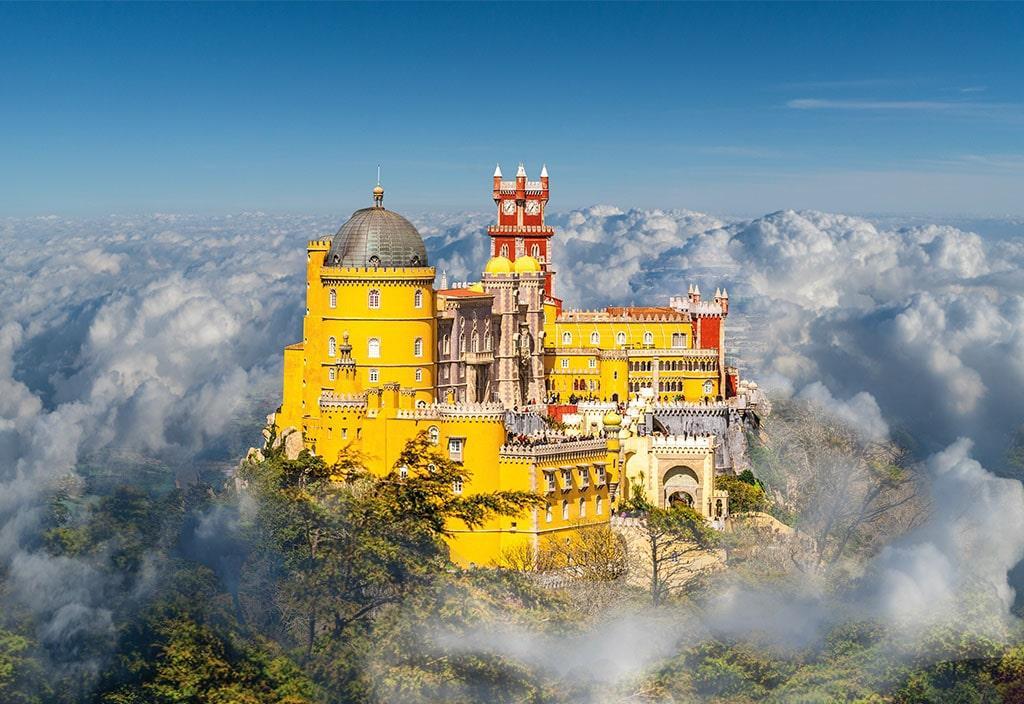 From the Portuguese aristocracy to Lord Byron, Sintra has captured the hearts of all that have gazed upon its historic castles and palaces – Tania Braukamper discovers its magic

The mountain range of Sintra – or as the ancient Greek Ptolomy described it, the Mount of the Moon, stands majestically as the Atlantic outpost of Lisbon. It is a misty mass of land which ends abruptly at a jaw-clenching cliff – the westernmost point of continental Europe. This relationship with the mystery of the great ocean has no doubt contributed to the mystical reputation Sintra has maintained since antiquity. Dotted with ancient boulders and crumbling ruins, there was no chance such a place would go unnoticed by the Romanticists of the nineteenth-century.

The philosophical and artistic current of Romanticism left a dent in the European world-view as a reaction to the birth of the industrialised, progress-driven society. The Romantics prized a return to nature as a source of harmony and peace; the ideal of a medieval life guided by the values of the most virtuous knights and dames, and, most importantly, the imagination surpassing the cold, utility-driven, rational mind. These values took deep root in Sintra – and the spirit of Romanticism lives on in its every corner.

There’s a Moorish castle dating back to the tenth century, impressive palaces and aristocratic properties, mysterious labyrinthine gardens, secluded old monasteries, charming hotels and a unique gastronomy. All of this and much more is brought together by a lush century-old forest, the green lungs of this ancient destination.

Nested in the mountain, the village is easily accessible  from Lisbon International Airport – a thirty-minute drive, or an hour-long train ride from the famous Rossio station. Indeed, many travel guides will promote Sintra as a day trip from Lisbon – which makes sense from a practical point of view. However, for the Romantics at heart who are willing to be immersed in this spellbinding land, one night, or even one week is not enough to exhaust the rich offerings.

Another world
Although any visitor to Sintra will be spoiled for choice, there are a few sites that are simply unmissable. The Pena Palace and Park is certainly the jewel of the crown and the first choice in case of a day-trip scenario. This nineteenth-century palace stands at the top of the second-highest point of the mountain range, with sweeping views of the entire region and the ocean beyond. A UNESCO World Heritage site and one of the Seven Wonders of Portugal, you can easily feel lost in the 200 acres of parkland that surround it, but don’t be deceived: all paths actually converge on the same destination.

Follow one to arrive at the colourful palace which served as a summer residence to the Portuguese royal family and that presents itself, in the utmost Romantic way, as the symbolic expression of the ideal life.

A short walk from the Pena complex is the entrance to the Moorish castle. More than a thousand years of history reside within its rugged stone walls, which served as an important defence when all of this region was the stage for a war between the Moors and the Europeans.

Apart from the stunning view, the castle imposes an introspective and serious mood. Its sheer size, plus the hostility of the location, invites us to imagine an unforgiving period in history when a king’s value was measured by his skills on the battlefield.

Head just outside Sintra’s historic centre and you’ll find another enchanting attraction: Quinta da Regaleira. Built by an eccentric millionaire at the turn of the twentieth century, the estate brings together themes like medieval alchemy, freemasonry, the Knights Templar and Christian Gnosticism. Stride down the noble Promenade of the Gods while statues of Greek gods and goddesses look on, or ponder the mysteries of the famed initiation well, a dizzying spiral said to represent the nine circles of Dante’s inferno. There is even a maze ™ꪪ of tunnels under the garden that lead the adventurous explorer through underground caverns, grottos and waterfalls. If fairytale creatures exist, this is surely the place to find them!

Endless enchantment
Sintra’s bounty of attractions by no means ends there: choose any one and it is guaranteed to surprise and delight. The National Palace is also the country’s oldest, emerging from some thousand years of history to still impress visitors with its unique conical chimneys and whimsical interiors. The sixteenth-century Convent of Capuchos compels you to introspection with its humble, cork-clad rooms and austere integration with nature. Exotic and ornate, the Palace of Monserrate is another true masterpiece of Romanticism that must be seen to be believed.

If time allows, don’t miss the chance to head out to the stunning coastline that marks Sintra’s end. Stretching from Cabo da Roca – Europe’s most westerly point – to the impossibly charming and picturesque village of Azenhas do Mar, it is home to many gems. The driving is as dramatic as the destinations are glorious.

Rest like royalty
Not every palace in Sintra is a sightseeing-only affair. At the Hotel Tivoli Palácio de Seteais, you can settle in and experience the life of a Portuguese aristocrat – but with modern comforts, of course. Built in the 1780s, this neoclassical marvel immediately inspires awe with its grand facade. Inside, romantic frescoed walls and elegant antique furnishings await. Spare at least a few hours to wander the hotel grounds, where orchards, mazes and a tranquil swimming pool offer plenty to enjoy. Then, after game, set and match on the tennis court, head to the opulent Anantara Spa for a treatment that rejuvenates both body and soul.

While there couldn’t be a more romantic retreat for couples, the Tivoli Palácio de Seteais is a perfect choice for anyone who appreciates old-world charm and exceptional service.

If a cosier retreat is more your style, take up a room at Lawrence’s – the oldest hotel on the Iberian Peninsula. From the polished oak floors to the stately furnishings, everything here is designed to sweep you back in time to the Romantic era without sacrificing a single drop of ™ luxury and comfort. Some of the hotel’s sixteen rooms come with crackling fireplaces, while others offer views that stretch up to the staggering heights of the Moorish castle. Wherever you rest your head, one thing is certain – the elegance and intimacy of this charming hotel will ensure you sweet dreams and an even sweeter reality when you awaken.

Treat your tastebuds
If all your romantic ramblings through Sintra leave you with an appetite, that’s a good thing: the area is famed for a number of culinary treats. Boost your blood-sugar levels by snacking on a queijada – a small, sweet tart made with fresh cheese and plenty of sugar – or one of the dreamy, custard-filled pillows known as travesseiros.

When something more hearty is in order, indulge in the bounty of the Atlantic, which is brought fresh to Sintra’s door. Seafood here is abundant and the options diverse, from no-fuss grilled fish to lavish oysters and exotic gooseneck barnacles. For a match made in heaven, pair a seafood lunch with one of the delicious wines from Sintra’s Colares region, where the grapevines snake through the sand instead of growing on trellises.

For an unforgettable moment of fine dining, stop into the glass-fronted Arola Modern Restaurant at Penha Longa Resort, where chef Sergi Arola serves up innovative dishes in stylish surrounds. Arola’s menu provides Portuguese cuisine with a contemporary twist, every dish bursting with unexpected contrasts of flavour and texture. If you feel really adventurous, there’s also the Michelin-starred LAB by Sergi Arola, where creativity runs wild with tastebud-tingling results.

For something more traditional, book a table at Curral dos Caprinos, located in the calm village of Cabriz at the foot of the Sintra hills. Here, warm hospitality, rustic decor and authentic food combine to create a dining experience that fills both heart and belly.

Sintra, the glorious Eden
Despite the fame of its castles and palaces, Sintra is much more than the sum of its tourist attractions. Sure, the architecture of every building is wondrous, the sprawling gardens divine. But there’s also a beauty less tangible. Awaken your senses to it, and discover the best thing about Sintra is the romance that drips through every tree-lined avenue, every light-dappled glade, every ivy-covered stone archway.

Perhaps Lord Byron, the Romantic-era poet, put it best in his epic poem “Childe Harold’s Pilgrimage”. He called Sintra a “glorious Eden.” And from the second you arrive, you will understand exactly why.