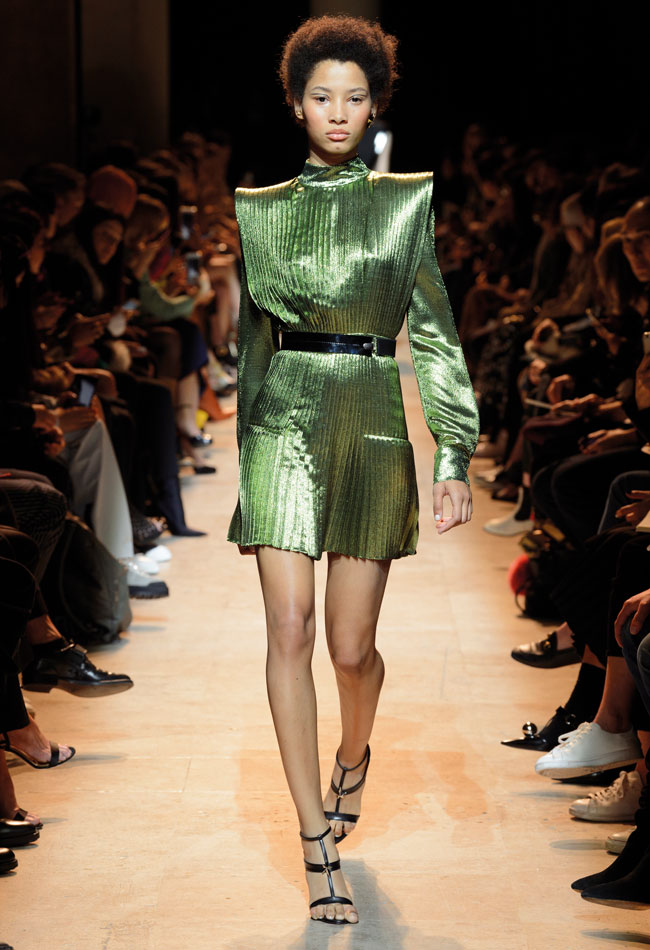 Author Ray Bradbury once said, “science fiction pretends to look into the future…but it’s really looking at a reflection of what is already in front of us.”

You could say the same thing about fashion. On the one hand fashion propels us into the future, constantly giving birth to new trends for us to keep up with. But on the other hand, it is ultimately anchored in what’s happening now. The runways are an oracle for future trends, but they also hold up a mirror to the world around us.

Is it any great wonder, then, that designers were looking to the heavens for their autumn/winter 2017 collections? Global warming has united the world with concern for our wellbeing. Global politics has us gripped with an uncertainty that is compounded by unreliable news.

At the same time, 2017 is a year that has optimistically peered out across the horizon and glimpsed a world of new possibilities. This is a year where NASA scientists discovered new solar systems and Elon Musk’s SpaceX revealed its first slickly-designed, working spacesuit. Interplanetary travel is looking more possible, and more stylish, by the minute. 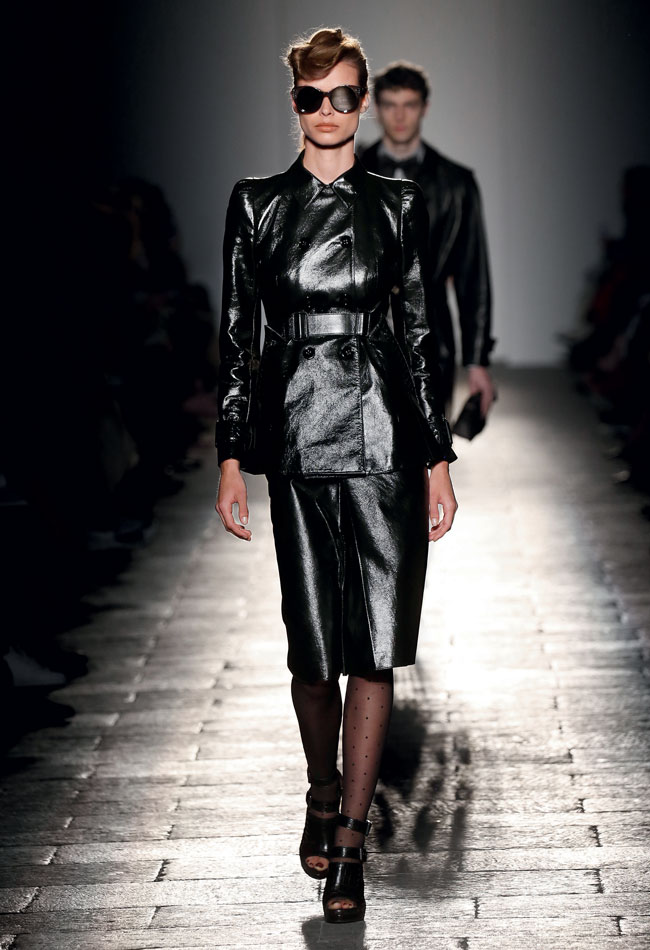 It is not the first time that the cosmos has left its mark on fashion. Cast your gaze back to the 1960s, when world events gave rise to the first space-age fashion trend. Designers André Courrèges, Pierre Cardin and Paco Rabanne were directly influenced by the global space race. Rabanne, fresh from conceiving his signature futuristic chainmail dresses, went on to design the costumes for Jane Fonda’s iconic space-age vixen in the 1968 film ‘Barbarella’. Some of Fonda’s outfits wouldn’t even look out of place on the shelves today.

Indeed, Rabanne’s silver and gold chainmail burst back from the archives and re-conquered the runway this winter under the impulse of current creative director Julien Dossena. Played down with chunky flat shoes and fresh faces, the disco-metallic dresses were shown to be capable of both elegance and modern-day cool.

Liquid metal fabrics showed up in other places too this season. Silver lamé dresses, like those at Bottega Veneta and Wanda Nylon, look like they’ve dripped off another world and onto one’s body. Wearing these pieces is easier than you might think: keep everything else simple and you can’t go wrong.

Other designers have approached the intergalactic theme more literally, splashing their pieces with prints of stars, planets and UFOs. Glowing galaxies whirl across the black sky of a velvet skirt at Christian Dior. Whimsical star motifs play across dresses at Chloe. Christopher Kane turns scientific sketches of spaceships into romantic, flowing frocks while Gucci, too, dabbles in flying saucers.

But if there’s one designer who can be relied upon to take any theme to the furthest reaches of its limits, it’s Karl Lagerfeld. For Chanel’s winter 2017 collection, he had Paris’ Grand Palais transformed into a giant rocket ship. Not only did it serve as the backdrop to a collection filled with silver leather, metallic space blankets, and astronaut prints, it actually launched some meters into the air — to a soundtrack of Elton John’s ‘Rocket Man’, of course.

Though not a hit at the time, 1982’s ‘Blade Runner’ would become iconic for both its story and its costuming. The film spliced together 1940s noir with 1980s cyberpunk, creating a unique vision of the future that would go on to inspire designers for years to come.

With the release of ‘Blade Runner 2049’ this year, the fashion world had another excuse to look to the future — by way of the past. Mere news of the sequel stirred up flutters of nostalgia for the gritty-glam dystopian world of the original. Perhaps that’s why the silhouettes at Bottega Veneta this season look like a toned-down version of something the character Rachel would have worn: shoulders emphasised but not exaggerated, waists nipped in, hemlines pencilling to below the knees.

It might also explain why designers, including Miu Miu and Pucci, yet again revisited clear plastic raincoats for winter. Ill-fated replicant Zhora wore one in the original film, while a nod to it shows up in the sequel as worn by Ryan Gosling’s digital love interest, Joi. The transparent mac may give off a vibe that’s simultaneously retro and futuristic, but it’s also ingeniously practical: it repels the wet weather while allowing you to show off whatever is underneath it.

Cinematic references always find their way into fashion because film, like fashion, can be a form of escape. Both art forms shuttle us away from the current climate we’re in, even as they are a kind of response to it. This winter sees our wardrobe choices inspired by the sci-fi films of the year — like Blade Runner 2049 and Star Wars: The Last Jedi — but also by those that have stuck in mind from the past. Don’t be surprised to find Matrix-style patent leather coats and undersized sunglasses on store shelves this season; or high-necked silhouettes like those at Mugler that could, with one wear, put you in command of the Starship Enterprise. 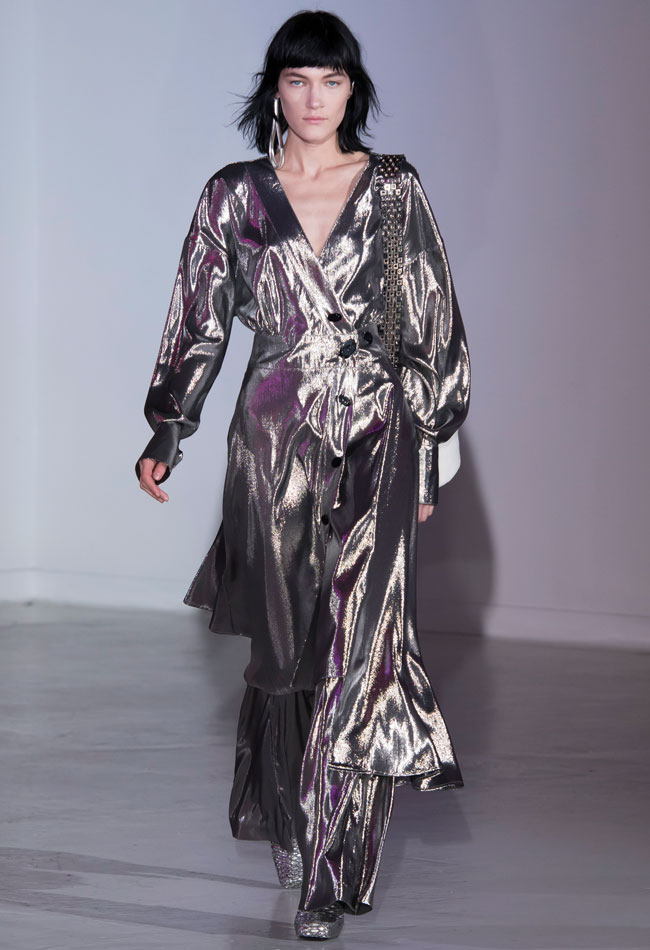 As for how to interpret the trend in a way that’s suitable for this planet, in this present, that comes down to preference. You could latch on to the dystopian, punky vision of a dying Earth where clothes are functionally-driven and tough, or you could add glamour to your winter evenings by draping yourself in iridescent liquid silver. Maybe you’d prefer to rise above reality by just a few inches with a pair of fantastical cosmic-themed heels. The choice is yours.

Whatever you do, just don’t miss the opportunity to get creative; to mash up retro visions of the future with bold new ones; to celebrate the beauty of the cosmos by having it swirl around your hips in the form of a skirt. And most of all, don’t miss the opportunity to think. To think about what the future might be like, and to think about what we can do, right now, to make it brighter.