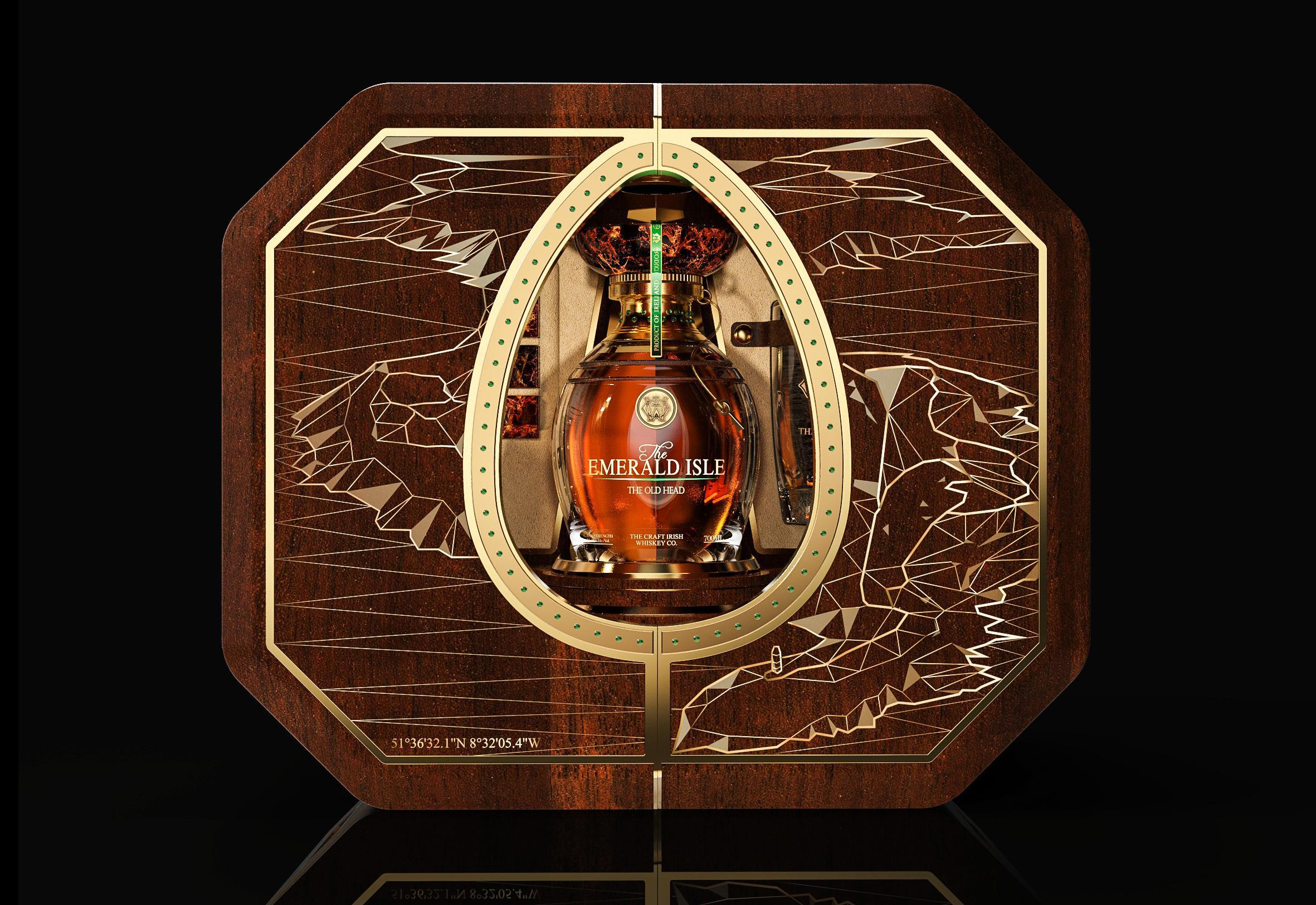 The Craft Irish Whiskey Co. has collaborated with Fabergé, the world’s most iconic artist-jeweller, to release ‘The Emerald Isle Collection,’ a seven-piece custom-made whiskey set which celebrates the ‘Seven Wonders of Ireland’. Beautifully presented in a dark walnut experience box, each set features two bottles of ultra-rare, 30-year-old, triple distilled Irish whiskey, accompanied by two unique and exclusive creations from Fabergé – the first-of-its-kind Celtic Egg objet and bespoke Altruist timepiece. Each collection also includes a humidor with two ultra-rare Cohiba Siglo VI Grand Reserva cigars, a gold-plated cigar cutter, gold plated water pipette, pure obsidian whiskey stones, a hip flask with a sample of the Emerald Isle whiskey, which is the rarest Irish whiskey in existence, and a carafe filled with Irish spring water from the same region where the whiskey was made.

Significantly, The Craft Irish Whiskey Co. has pledged 100 per cent of the proceeds to charity, with 50 per cent of proceeds benefitting the Correa Family Foundation supporting children affected by serious illness, and the remaining 50 per cent donated to the buyer’s charity of choice. The inaugural launch of these highly limited boxes will take place via a private auction in Houston, Texas on 2 February 2021.

‘The Emerald Isle Collection’ is The Craft Irish Whiskey Co.’s second release, and now takes the crown as the oldest triple distilled Irish whiskey in the world, following the launch in November 2020 of a limited 333 bottles of The Devil’s Keep – a 29-year-old, triple distilled, single malt whiskey. The 30-year-old Emerald Isle’s single malt Irish whiskey has been aged in 200-litre ‘first fill’ American oak casks, which previously stored bourbon, and then finished in a rare single 40-litre Pedro Ximénez sherry barrel. This maturation process has imparted profiles that range from chocolate fudge and maple syrup on the nose, to sweet leather and silky-smooth, ripe banana on the palate which flows into a long finish with hints of creamy meringue and rich vanilla cigar smoke.

‘The Emerald Isle Collection’ fuses Faberge’s unique heritage with rich Irish tradition and mythology, as well as the distinctive flavours of an ultra-rare whiskey, in highly collectable and unique special edition, legacy bottles. It is little known that Ireland invented whiskey in the 14th century and dominated the sector for centuries until an unfortunate fall due to both world wars, embargoes and their fight for independence; with the launch of The Craft Irish Whiskey Co.’s collection, Irish whiskey is being restored to its former glory as the world’s most iconic whiskey.

This bespoke whiskey collection takes inspiration from seven historical and important places in Ireland and sees Fabergé honour Irish heritage in the form of its first ever Celtic Egg bespoke objet. The Fabergé design team, along with Jay Bradley and Tiago Russo, Design Director at The Craft Irish Whiskey Co., worked together to pay homage to seven beautiful and iconic Irish locations that hold a certain mysticism or mythological interest – representing the ‘Seven Wonders of Ireland’, and lucky number seven.

Each bespoke set is presented in an experience box which has been inspired by the shape of an emerald, representing the natural beauty of Ireland, and features an illustration of one of the ‘wonders’ of Ireland and its geographical coordinates, with a frontal egg-shaped aperture and a frame of coloured gemstones. Inside each box is the pièce de resistance, the hand-crafted whiskey bottle containing the ‘liquid gold,’ a collector’s item in its own right. Each of the seven bottles has been inspired by key Fabergé design elements, set with responsibly sourced emeralds from Gemfields’ Kagem mine in Zambia on the neck and lowermost part of the bottle.

Each bottle of whiskey is accompanied by a bespoke Fabergé Celtic Egg, handcrafted by fourth generation Fabergé enamel Workmaster Dr. Marcus Mohr. Each egg is handcrafted from 18k yellow gold and features Fabergé’s legendary guilloché enamel in a pastel green; the green, white and gold colours of the egg symbolising the Irish flag. Guilloché enamelling is a time-honoured technique which combines the art of engraving using an engine-turning machine combined with hot enamel which is hand-painted onto a surface in a series of layers to produce a shimmering liquid silk effect. This rare artform is a signature of Fabergé’s, practised by only a select few expert craftspeople around the world.

The seven unique eggs are set with a pavé diamond Celtic knot, a renowned symbol of Irish heritage which has no start or finish, representing eternity, love and friendship, and frames a coloured gemstone at its centre. Each of the seven Fabergé eggs features a different gemstone on its exterior: Gemfields Zambian emerald, Gemfields Mozambican ruby, blue sapphire, amethyst, rhodolite, spessartite or tourmaline, representing each of the seven locations, from The Blarney Stone to the Giant’s Causeway, and its rich Irish mythology. A matching cabochon coloured gemstone is also set on top of the egg, which itself is mounted on a beautiful hand-carved and polished rock crystal plinth with gold base.

In true Fabergé spirit, a surprise awaits inside in the form of a rough, uncut Zambian emerald responsibly sourced from Gemfields, presented on a gold guilloché base with intricate claw setting. This is the first time in Fabergé’s history that the Maison has featured a surprise of this kind. It invites collectors to further customise the creation by commissioning Fabergé to convert the beautiful rough emerald as part of a bespoke set or piece of jewellery.

Emeralds are 20 times more rare than colourless diamonds, and aptly are believed to symbolise hope, growth and fresh starts – which befits the current challenging times.

In addition to the whiskey and unique Celtic Egg, each edition of ‘The Emerald Isle’ features another ultimate collectors’ item, a bespoke one of-a-kind Fabergé Altruist 18k rose gold timepiece with a self-winding movement from Vaucher Manufacture. Each piece has a unique dial, inspired by the landscape of one of the ‘Seven Wonders of Ireland’. Hand crafted by Fabergé’s Workmaster André Martinez, a specialist in decorating exquisite watch dials, the white mother of pearl face has been skilfully etched and hand-painted with 24k gold flakes. The case backs on each piece are dedicated to The Craft Irish Whisky Co. with the addition of the CIWC logo and 1/1 engraved to signify the uniqueness. The timepiece is finished with a brown alligator strap which complements the design perfectly.

Jay Bradley, Founder of The Craft Irish Whiskey Co. commented on the collaboration: “We are more than delighted to be partnering with prestigious atelier Fabergé to launch ‘The Emerald Isle Collection,’ which is an extraordinary bespoke set, and will truly put ultra-rare luxury Irish whiskies on the map. Fabergé is an iconic brand with an enduring legacy that continues to evolve and knows no bounds, so we cannot think of a better collaboration for a luxury whiskey from Ireland. This is simply a dream come true for me and the team – and an unbelievable elevation for a 30-year whiskey, which was already going to be a particularly sought-after collector’s item. With the Fabergé addition, there is surely nothing that compares for the ultimate aficionado.

Josina von dem Bussche-Kessell, Global Sales and Business Development Director at Fabergé, said: “This is a thrilling partnership for Fabergé, as it sees us continuing our legacy of creating unique and collectable objects, bridging the gap between historic legacy and modern-day heirlooms. Rare whiskey has seen tremendous investor attention, and the whiskey market is undergoing a dynamic evolution. It is very exciting for Fabergé to participate in such a cross-pollination of luxury sectors, thereby adding a contemporary twist on age old traditions.