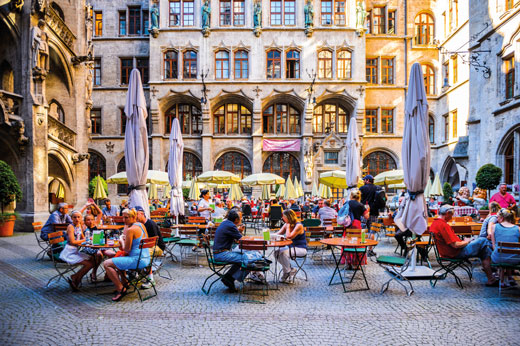 A city of style and substance

Germany’s third largest city, Munich, has earned its place as one of the world’s most liveable cities. From taking the global top spot on Monocle’s Quality of Life Survey 2018, to ranking third in the 2018 Mercer Quality of Living survey, Munich has so much more to offer visitors than Oktoberfest.

Thee city lies on the River Isar and is just 50km north of the Bavarian Alps, with the former royal palace of the Wittelsbach monarchs of Bavaria, the Munich Residenz, and the naturally beautiful, 910-acre English Garden just a few of the sights on offer to visitors. After sustaining heavy bombing during World War II, which saw damage inflicted on up to 90% of the city’s historic centre, Munich completely rebuilt itself.

Munich Airport (Flughafen München) serves as the main airport and regulated taxis are easily accessible outside of arrivals, charging around €70 for a one-way journey to the city centre, but regular S-Bahn rail trains take 45 minutes to reach the centre and cost €10. anks to the central location of München Hauptbahnhof, Munich’s main railway station, an enormous range of hotels for both corporate and leisure travellers are a short walk from this well-connected terminal.

At less than three years old, Cocoon Hauptbahnhof is one of the newest hotels in the area and manages to pull- o a retro alpine-cabin theme without being tacky. Many of the 103-rooms are decked out with wood-paneling on the walls to give the feeling of being in the Swiss Alps and include modern backlit murals of cows grazing. A classic Bavarian breakfast is served in the relaxed dining area with the lobby bar offering a great place to unwind. From a cosy alpine hut in the garden for small events, to a gondola lift in the lobby and aged-wooden side tables in bedrooms, the Alpine theme can be found throughout the entire hotel. Two of the suites were designed in collaboration with Almdudler and Jägermeister, to create distinct spaces for visitors who want a truly unique stay.

Set down an unassuming street in suburban Munich, few restaurants can compete with the reputation of Tantris. Widely regarded as one of the finest restaurants in the country, two Michelin-starred Tantris opened in 1971 and was previously ranked 44 in the World’s 50 Best Restaurants, published by Restaurant magazine.

Look past the relatively stern exterior and patrons are greeted with a splash of colour and glamour inside. French-focused European dishes are available at this luxury dining destination with head chef Hans Haas’s recommended five-course lunch menu offering a perfect selection for first-time visitors.

The Charles Hotel, part of the famed Rocco Forte hotel group, is anything but unassuming. Constructed in art-deco style by the German architects Hilmer & Sattler and Albrecht, 5-star The Charles provides residents with breakfast in the stunning Sophia’s restaurant, surrounded by oor-to-ceiling windows and beautiful park views.

The hotel opened in 2007 and is much younger than many of the other luxury hotels in Munich. Rooms are on average larger than similar properties and feature neutral colour schemes, contemporary artwork and views over the Old Botanical Garden.

The historic Königsplatz Square is around five minutes from The Charles Hotel and is arguably one of the most charming classical squares in the country. German architect Karl von Fischer modelled Königsplatz on the Acropolis in Athens with the square framed by the Propylaea city gate and Glyptothek museum, which houses a considerable collection of Greek and Roman sculptures.

Around Königsplatz is a mix of galleries and museums that make up the artistic Kunstareal quarter. The three Pinakotheken galleries of Alte Pinakothek, Neue Pinakothek and Pinakothek der Moderne are steps away from Egyptian art museum Staatliche Sammlung für Ägyptische Kunst and the Museum Brandhorst, which showcases a private collection of modern art.

Singular pieces of art, such as the Madonna of the Carnation, which remains the only painting by Leonardo da Vinci in a German gallery, to works by Pablo Picasso and Andy Warhol can be found in this area.

A ten-minute taxi from Königsplatz square is Asian ne-dining destination MUN Restaurant. After walking down a minimalist staircase, an understated interior welcomes diners at MUN. Holding 15 points in Gault & Millau, MUN is a small and intimate venue, which is ideal for a polished dining experience.

A truly eclectic tasting menu is presented that takes visitors on a journey through Japanese, Korean and Chinese culinary excellence, with a slight Argentinian influence. The Haemultang, a Korean spicy seafood stew, Steak & Kimchi and Chestnut & Black Sesame Dessert are the stand-outs from the four-course degustation menu.

Motel One Munich-Parkstadt Schwabing is an ideal hotel for leisure travellers. Don’t be fooled by the name, this modern and design-led hotel is far from a motel with industrial design elements throughout. The ground-floor lobby has several co-working style spaces to get some work done, as well as a large bar area for laid-back drinks

Boutique hotel Ruby Lilly in the heart of Munich in the Maxvorstadt district strongly reflects Munich’s reputation for being a glitterati hotspot and features interior designs inspired by cult Munich TV show gure Monaco Franze. The ‘lean luxury’ approach Ruby Lilly embraces means while just the necessities are included, they are all of high-quality. For example, there are no tea or coffee making facilities in-rooms but each of the floors holds a galley, which offers a complimentary selection of organic teas and a vending machine for snacks.

Marienplatz, Munich’s main square since 1158, lies at the centre of the city and houses a number of famous sights, particularly Neues Rathaus (Town Hall) and the iconic Glockenspiel. Even a short walk around the square can give time-poor corporate travellers a real taste of the historic connections found within Munich.

Five-star Hotel Bayerischer Hof is the premier place to see and be seen in Munich. Countless celebrities, artists, politicians and members of international royal families have been regular guests of this Grand Hotel since 1841. There is a huge amount of diversity in room design with visitors able to choose between Laura Ashley style rooms, Graf Pilati style, Colonial, Cosmopolitan R&B and the most up-to-date designs from Belgian interior designer Axel Vervoordt.

While numerous hot-spots are on the doorstop of Bayerischer Hof, the five restaurants, six bars, 40 function rooms, nightclub, salon, luxury shops, cinema and theatre found within the hotel complex mean guests don’t have to go far to sample the best high-end experiences.

High-end department store Oberpollinger is yards away from Bayerischer Hof and is a bona de luxury shopping oasis. Over 34,000 sqm of designer brands sit in the open-plan boutique, including Armani, Bottega Veneta, Gucci and Dolce & Gabbana, ensuring that there is a label for every guest.

For visitors to Munich looking for a more playful and relaxed hotel, 25hours Hotel The Royal Bavarian is the pinnacle of accessible luxury. Located inside what used to be the Imperial Post and Telegraph offces and just steps away from Hauptbahnhof, the central train station, 25hours mixes quirky touches, like working typewriters in some rooms and the lobby, and modern interior design elements that elevate the property above many of its competitors.

IZAKAYA is the perfect place to wind down after a long day of working or shopping. Opened in 2017, IZAKAYA is a unique concept that mixes together a Japanese grill approach with elements of South American cuisine. Small dishes are the biggest draw for visitors with classics like slow cooked ribs and iberico ham & honey melon being offered alongside sea bream & grapefruit ceviche and scallop & truffle suimai.

Today, Munich pairs iconic sights, like the large Baroque palace of Nymphenburg in the north of the city, with avant-garde museums, including Pinakothek der Moderne and renowned restaurants that showcase the best this world-class city has to offer.