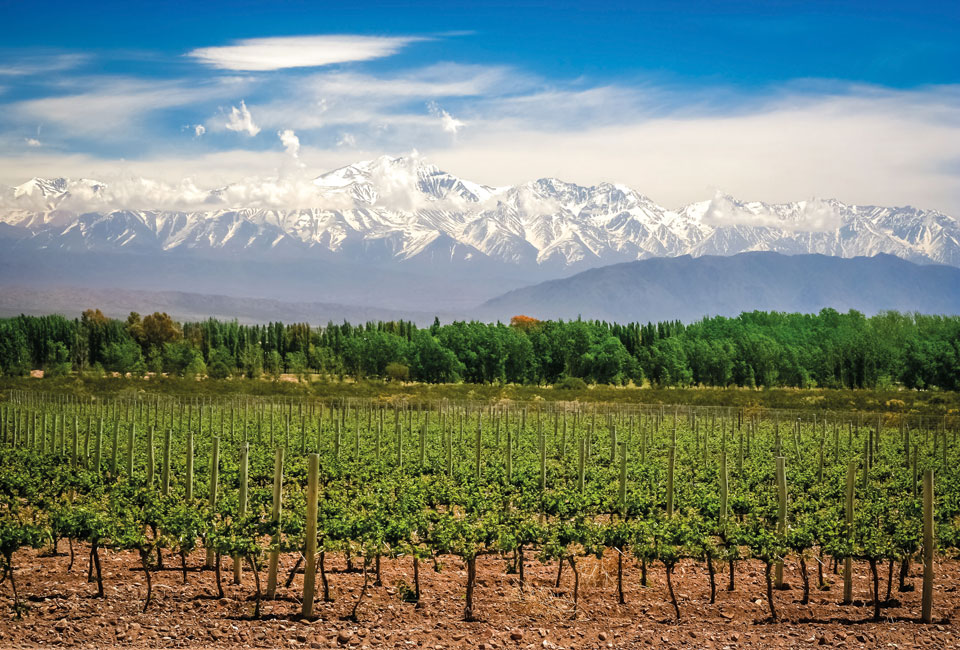 From Gauchos to Grapes

In the lap of the Andes lies the beating heart of Argentina’s wine country – the province of Mendoza. Cradled within a rugged backdrop of mountainous landscapes, this rugged yet beautiful corner of the world is home of some of the world’s proudest Malbecs: it’s also gaucho country, and prides itself on warm hospitality, hearty food, character and tradition, all of which are deeply rooted in the land.

The centre of Mendoza city is lined with leafy streets, bars and restaurants, which fill as the sun sets with locals and tourists alike. It’s a city for foodies – meat lovers especially will love the local fare. Try a traditional parrilla – a tantalising barbecued selection of prime Argentinian cuts, which are both rich in quality and quantity. Or maybe sample a lighter bite of lomo – sandwiches containing thinner steak-like cuts seared and generously folded into a French baguette, then packed with caramelised onions, cheese, bacon and complete with fresh salad leaves to ease the guilt.

Whilst it would be all too easy to settle into city life here in Mendoza, to savour the full splendour of the region you have to venture away from the metropolis and into the wilder, mountainous areas. Here the winding roads are punctuated by wineries and estancias (ranches) offering a range of tours and activities to help you to get to grips with the culture of the land, from gauchos to grape.

Set in El Salto, the village of Potrerillos is well known for its cabalgatas (horse riding) and gaucho-led tours of the surrounding countryside. There is a huge selection of providers to choose from and some are better than others, so prior research is recommended. El Rincón de los Oscuros is a family-run estate founded in 1992 with a stable of over a hundred horses, all trained by traditional gauchos with generations of knowledge – our guide Mingui is the youngest in a long family line of gauchos. He started horse riding aged two and by eight he was already taming bulls – perfectly normal, he says, if you lived in a small cattle-working village. His deep understanding of animals is evident as he and his dark brown stallion, Llauyin, move in perfect harmony along the track.

The first part of our full-day tour with Mingui led us to spectacular views of La Garganta del Diablo (throat of the Devil). The route took us through classic gaucho territory as we navigated dried-out riverbeds lined with cactus, copper-red rocks and the cloud-piercing Andes everpresent on the horizon.

After an invigorating ride we were welcomed back to El Rincón de los Oscuros to sink into a luxurious sofa and watch as flame-grilled steaks finished their fiery journeys from griddle to plates. Served with a perfectly dressed salad and washed down with a bold Malbec, this is everything you would expect from a traditional Argentinian lunch.

We took a short rest before saddling up for the afternoon’s ride, which would lead us out towards the wide expanse of La Cortadera. Here on this untamed plain the Andes rise up to one side while the sky blue of Lake Potrerillos rests serenely on the other. It’s the perfect setting to put the reputation of Argentinian horses to the test. Setting off, we galloped until the wind roared in our ears scattering all thoughts and leaving only a pure sense of adventure. 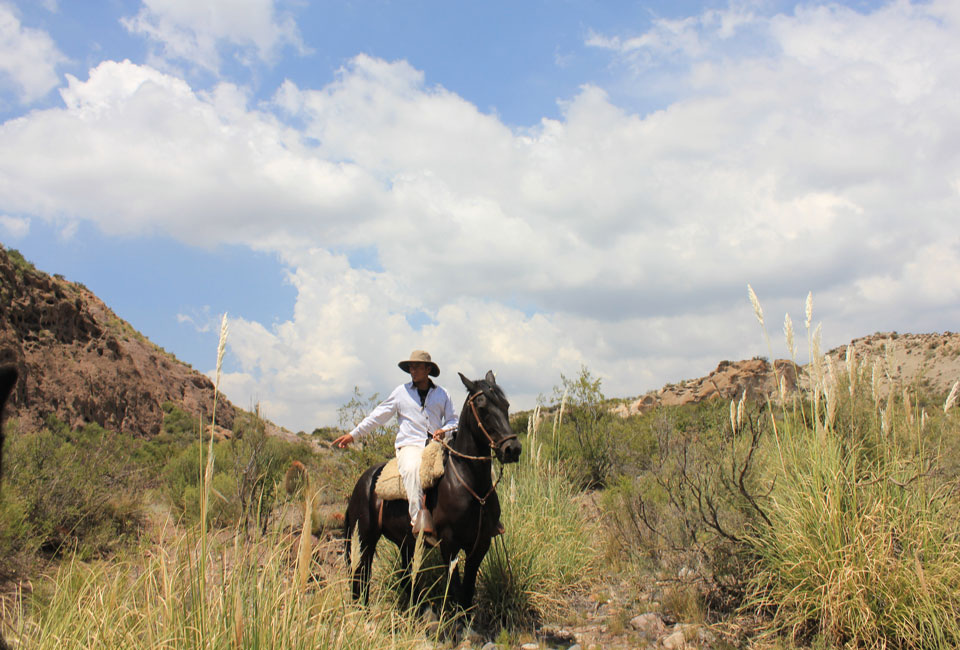 Head south of Mendoza city and keep going for 100 km and you’ll arrive at the Uco Valley, where the vast majority of the region’s vineyards lie. Home to the world’s finest Malbec wine, the region actually produces a huge variety of grapes that are perfect for winemaking. A fact that The Vines of Mendoza have been proving since 2005. The Vines is an ambitious cooperative project that was started by Argentinian Pablo Giménez Riili and American Michael Evans. It has since grown remarkably to count over 200 owners, producing 368 different wines including 25 varieties of white and red. Many of these part-time winemakers own just a single acre of land and with the help of the professional oenologists at The Vines, produce wine solely for their own consumption. The project keeps growing year on year and some of their brands have even scored over 90 points in the Parker’s list.

Enjoying a wine tasting at The Vines is essential when visiting the Uco Valley. Resident oenologist Lorenzo Scagnetti, an Italian who has trained throughout the world, walked us through an incredible range of wines – from the renowned Malbec to a crowd pleasing Merlot. All set the palate racing with earthy and fruity tones.

Wine blending courses are great for those with an appetite to learn more about the region’s viticulture. Since The Vines works with several landowners, Scagnetti meets once a year with each of the amateur winemakers and goes through a blending experience tailored to their product. At The Vines, they want their guests to feel part of the project so you too can have the chance to blend some young wines – choosing from Merlot, Cabernet Sauvignon, Cabernet Franc and
Malbec. You can even take a bottle of your own blend home – but only if it wins the “best blend contest” against the other participants!

Scagnetti believes 2017 has been a great year at the Uco Valley, so any Malbec lovers out there would be advised to get their hands on a Mendoza red before it runs out.

Nestled within the vineyards, The Vines Resort and Spa is a luxurious establishment comprising 22 sumptuous villas, plus a spa and gym that boats incredible views of the rolling vineyards and Andes beyond. Arriving at the hotel for lunch I admired the clever natural decor; from dried vines woven into a lattice on the wall, to a beautifully polished gnarled tree stump above the bar, each feature offered a stylish reminder of our glorious surroundings.

The Vines is home to Siete Fuegos, the restaurant of worldrenowned Argentinian chef, Francis Mallmann. Mallmann is celebrated for his unbridled passion for fire and the transformative effects it has on his chosen ingredients. To eat at Siete Fuegos is an experience like no other – Mallmann’s kitchen is complete with no less than seven different fires, each bringing a unique elemental flair to the menu.

We started with a rich array of breads: focaccias and the softest white rolls, all served with charred and salted ham. It was all too much to finish but all but impossible to resist. With the help of a full-bodied Malbec we held out and advanced to the main menu.

Surprising starters like cheese polenta, plated on a warm soft bed of slow-fired tomatoes, with wild sage, aubergine and home-made tahini set the tone. Particularly impressive was how the elements had given the polenta a delicious crispy shell. Challenging all previous experiences, every mouthful was a symphony of flavours and textures. Even the pear salad had felt the touch of Mallmann’s fiery hand: caramelised fruit, dark golden for the most part but pulled from the flame before fully turning, leaving a sweet, charred crescent of pear folded with salty cured loin, served velvet soft buffalo mozzarella and savoury discs of roasted tomato.

The main courses took us deeper into the fire and whilst the chef of “1000 potatoes” caters exquisitely for the non carnivorous, the symbiosis Mallmann achieves between meat and flame borders on the ceremonial. The lomo is a long succulent tenderloin, crisp on the outside, coiled around creamy avocado, served with a fresh tomatoes and a light mascarpone dressing.

The mouth-watering entraña (skirt steak), displayed a beautifully simple, rustic connection to the mountains and the gauchos who work the land. Splashed with chimichurri and accompanied by coal-roasted potatoes and salad, it invoked the warmth of a campfire.

After such an incredible meal there was little else to do but take a snooze in a poolside cabana. With the cool mountain breeze taking the sting out of the afternoon heat, I wondered how Mallmann masters all that fire, and thought of the gauchos out there working the land.