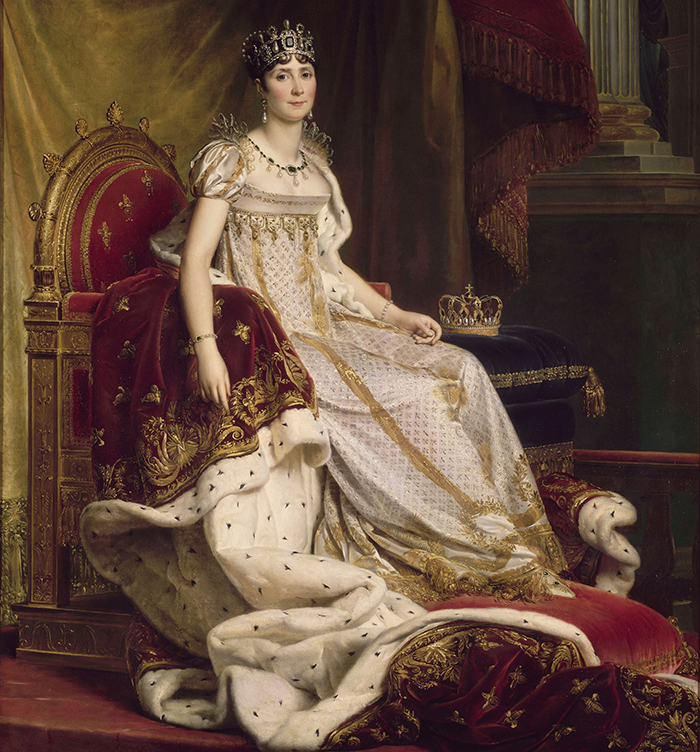 Gemstones and Tiaras: Jewellery of Napoleon’s time in photos

The jewellery of Napoleon’s era was very different from that created before the French Revolution: it was more unobtrusive, but no less precious; rather, it was even more valuable.

Its formal idiom was reminiscent of the Biedermeier style: delicate and, unlike the pompous Baroque jewellery, sleekly simple and finely crafted, gilded and sometimes embellished with intaglios and laurel leaves. 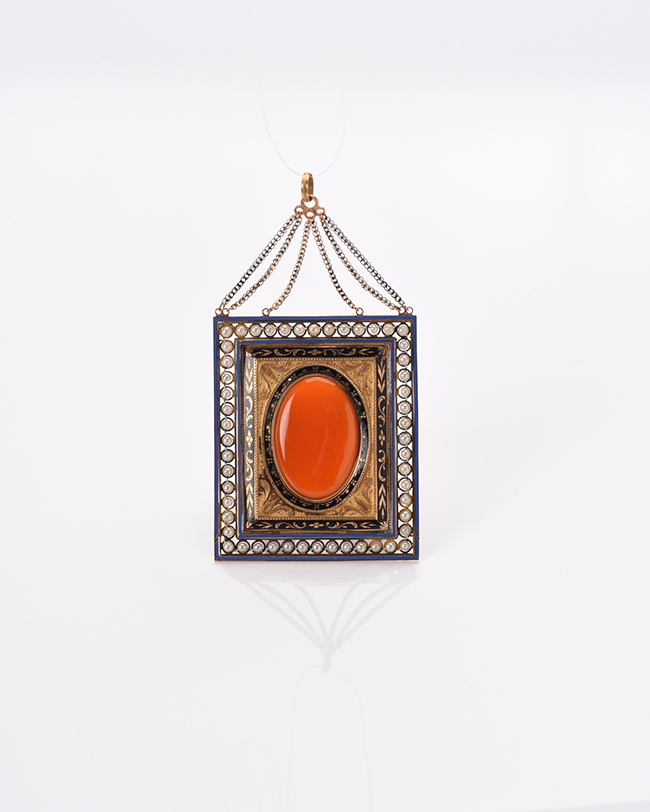 Diadems and representative necklaces created back then will be on show, as well as a golden dinner service, plus a belt typical of the time, enhanced with malachite and intaglios, which was fastened at the wearer’s back with silk bands, thus gathering the fashionable, gently flowing dresses below the bosom. 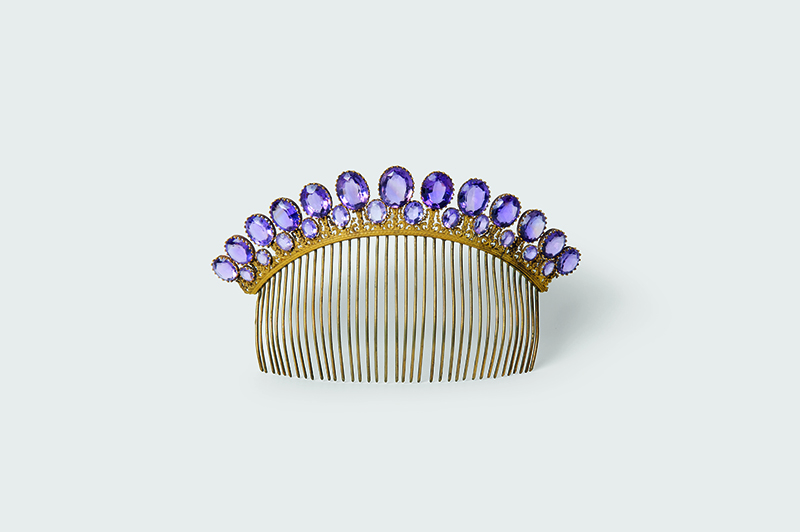 Ornamental comb/tiara: gilt bronze, amethysts, presumed to be made in France, circa 1805–10.

The beginning of the Directory in 1795 brought about the development of a distinctive, antiquity-driven Parisian fashion. Women were now wearing short-sleeved dresses with a high waistline, whose cuts and designs required new types of jewellery. 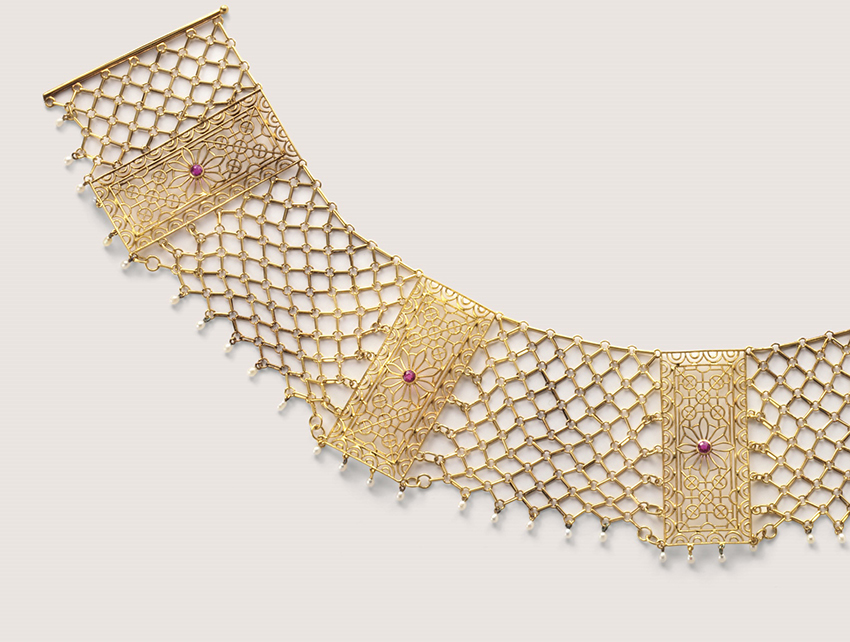 Choker: gold, pearls, rubies, presumably made in Germany, circa 1820, probably from the estate of Napoleon’s second wife Marie Louise

Napoleon was an aficionado of cameos and intaglios in the classical antique style which, in addition to symbolising his imperial aspirations, highlighted the gemstones’ multi-layered structure to perfection.” says co-curator Martina Eberspächer. Fabrics were often enhanced with a bee motif that, in a sense, was symbolic of a turning away from the royalist lily.

Another facet is Berlin Iron Jewellery: during the period of the Napoleonic Wars of Liberation 1813–1815, ladies were asked to donate their precious metal jewellery and exchange it for iron jewellery. In line with the motto “I gave gold for iron”, they regarded themselves as patriots for the rescue of the fatherland. 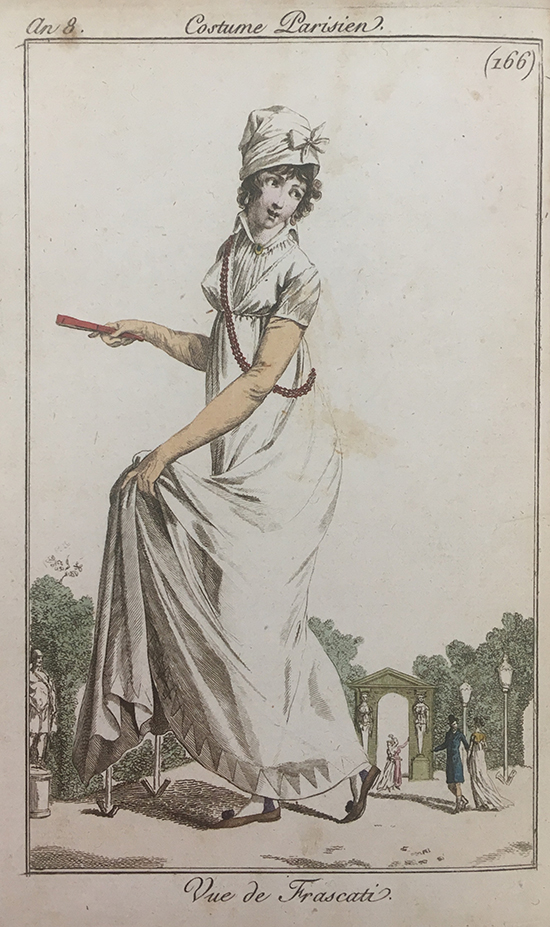 Fashion print for a revolutionary habitus Costume Parisien, circa 1799

“These interrelationships between the arts and crafts and politics can be appositely spotlighted by this exhibition; that’s what I find particularly exciting about it,” says Martina Eberspächer, adding: “We’ll be presenting an overview of the Napoleonic era, which brought about fundamental societal changes within a relatively short period of 15 years and, during these highly dramatic years, also inspired the creation of superbly crafted objects.