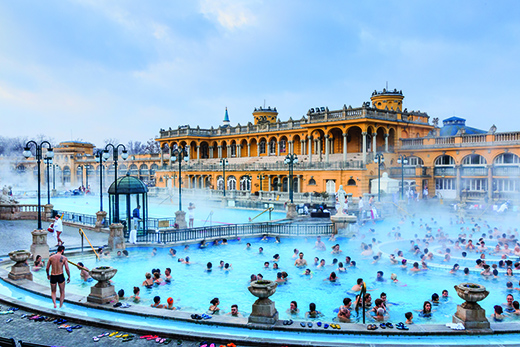 A warm welcome to Budapest

Budapest, Hungary’s capital, sits high on the pantheon of the world’s great cities. Home to 1.7 million people, it houses some of the most celebrated museums and heritage sites. From the iconic Franz Liszt Academy of Music to the stunning Hungarian State Opera House and culturally relevant House of Terror, which acts as a memorial to the victims of the fascist and communist regimes in 20th-century Hungary – a diverse array of institutions greets visitors to this storied city.

Due to Budapest’s complex history, with Buda and Pest being separate cities prior to their 1873 merger that created Budapest, there are two distinct areas that visitors can explore. Hilly Buda is the quieter and more historical side, where locals reside in imposing buildings, whereas Pest is almost completely flat and has a much more hectic and busy atmosphere.

Out and about in Buda

The River Danube divides Buda and Pest, with Fisherman’s Bastion on Castle Hill in Buda providing panoramic views over Pest and the sprawling Hungarian Parliament, which is the third largest Parliament building in the world. Old-world glamour is the trademark of Buda and numerous thermal spas, including the grand Lukacs Baths and Rudas Baths, can be found throughout Buda. Although the largest and most popular baths, Szechenyi Thermal Baths is across the river in Pest.

Fine-dining options are plentiful in Buda with Pierrot Restaurant providing the perfect location for a smart afterwork dinner, moments away from alluring landmarks. A stylish interior welcomes guests with framed portages adorning the walls and handwritten menus showcasing seasonal courses, as well as experimental dishes. Confit piglet cheek with Hungarian potato paprikash and chanterelle ravioli with chervil potato mousse are the standout dishes at Pierrot.

A few doors down from Pierrot is the impressive Pest-Buda Hotel. Pest-Buda Hotel in the Buda Castle District is a ten-room boutique hotel with an abundance of history. Founded in 1696, Pest-Buda is in an ideal location for seeing nearby landmarks, including Matthias Church and Fisherman’s Bastion, as well as taking in views over the Danube. Before a morning meeting, business travellers can visit some of the most popular sites in Buda from the hotel and miss the crowds that form around these hotspots later in the day.

Each of the rooms and suites have been designed to an extremely high standard, bringing together historic building features, like exposed brick walls and original baroque wood roof structure, with modern décor and high-end amenities, such as a rainforest shower, free-standing bathtub and L’Occitane organic toiletries.

Perhaps unsurprisingly, due to the myriad of locations available in the city, Budapest has a thriving film industry and countless TV shows, movies and even music videos have been shot in what has been described as the ‘Paris of the East’. From blockbuster film Blade Runner 2049 to the critically-acclaimed movie Tinker Tailor Soldier Spy and TV series Homeland, high-profile productions take place throughout the year. 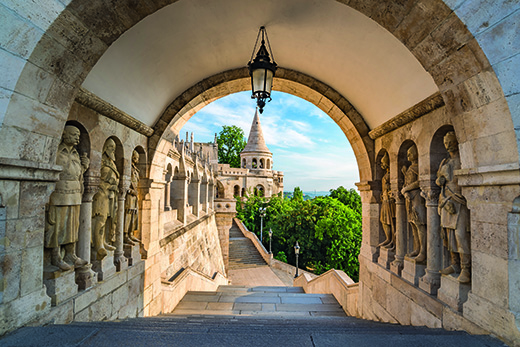 Five-star Corinthia Hotel Budapest is one of the capital’s leading luxury hotels. Originally opened in 1896 as the Grand Hotel Royal, after an extensive renovation process, Corinthia restored the building and reopened in 2003 on the Grand Boulevard, a major thoroughfare in the city. The neo-classical façade stands out on the Boulevard and inside the lobby exudes luxury with a stunning marble interior greeting guests.

High-ceilings, expansive corridors and numerous bars and restaurants make Corinthia a true luxury hotel and more than justifies it costly price tag. Business travellers who want a relaxing and practical working environment can make use of the Executive Club. Accessible through a private elevator, the Club provides breakfast, lunch snacks, afternoon tea and a happy hour, where all food and drinks are complimentary.

No visit to Budapest would be complete without at least a short visit to Andrássy Avenue. Home to countless international fashion brands, including Burberry, Louis Vuitton and Moncler, and high-profile Hungarian designers, Andrássy Avenue is a shopping haven lined with Embassies, theatres and elegant cafés.

Starting at Elisabeth Square, a vibrant dining and meeting place for locals and passing tourists, and stretching 2.5km to the iconic Heroes’ Square, which features statues of pivotal Hungarian leaders, the Avenue caters to both culture spotters and luxury shoppers alike.

Just behind Andrássy Avenue, sits The Living Quarters, an eclectic serviced apartment concept from renowned Budapest-based hospitality firm BrodyLand. The Living Quarters is set down an unassuming side street but literally seconds away from the hustle of central Budapest, as well as relaxed cafes and traditional Hungarian restaurants.

One of the key benefits guests of The Living Quarters can make use of is the café-cum-working space called The Workshop, which is located just below the apartments. This members-only venue is the epitome of bohemian cool and would be the perfect place for informal meetings and refined dinners.

Beers from local microbreweries are served with both traditional starters and mains, like, Prawn Pad Thai with noodles, bean sprouts, crushed peanuts & lime and mushroom tempura with soy dipping sauce, with more unconventional desserts like Tempura Brownie with matcha ice cream finishing off the menu.

Travellers can sample the best Budapest has to offer, even on a short business trip, thanks to the compact nature of this city. It’s not hard to see why Condé Nast Traveler previously ranked Budapest as the world’s second best city with history buffs spoilt for choice in Buda’s Castle District and Pest offering a more lively city environment.

A visit to the Szechenyi Thermal Baths is the perfect way to round off a visit to Budapest. The largest of its kind in Europe, Szechenyi welcomes locals and tourists alike while the hours away in therapeutic waters of up to 77°C. The various medicinal components of the water are said to have curative benefits for various joint and muscular issues – and even if they don’t, it is extremely relaxing.