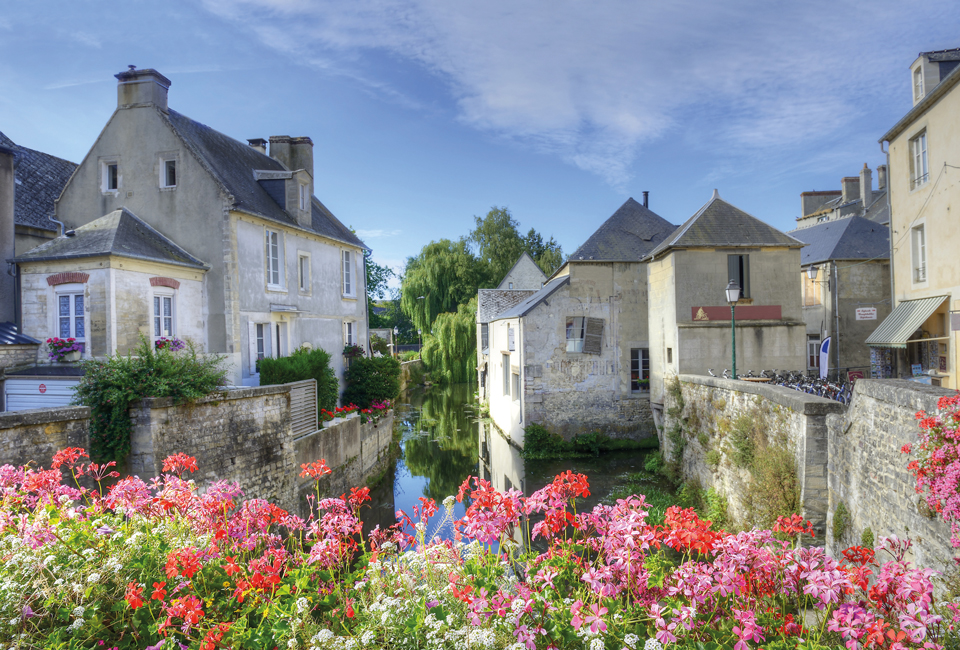 With one foot in the Middle Ages, and the other firmly rooted in the 21st century, a trip to Bayeux in northern France is for those intrigued by Europe through the ages. Located a couple of miles inland from the sandy D-Day beaches of Normandy, Bayeux pays deference to its 20th century history with several war museums. Thanks to a local chaplain, Bayeux was spared the bombs of World War II, thus preserving the town’s rich architectural heritage.

The medieval Old Town is a cluster of attractive 16th century manor houses, cobbled streets and humpback bridges spanning the shallow Aure River. It’s a delight to explore on foot at a gentle pace. Attractive timber-framed buildings with their protruding upper storeys provide welcome shade for shoppers in the streets below. Wherever you go, you’ll be struck by the flourishing flower beds, colourful tubs and hanging baskets brightening the streets of this “Ville Fleurie”, earning it a coveted three-flower award.

Start your visit to Bayeux at the Office de Tourisme on Pont Saint Jean in the heart of the Old Town. Pick up a map which includes a self-guided walking tour. It’s the best way to locate all the highlights as you stroll along Bayeux’s medieval streets. In between the elegant lace shops, boulangeries and gourmet épiceries, you’ll find yourself looking out for local landmarks. These include the massive revolving waterwheel outside the Musée de la Tapisserie de Bayeux and the evocative Monument des Déportes high on the wall of Bayeux City Hall.

After marvelling at hidden statues and secret doorways of former abbeys (the earliest B&Bs in the city) the tour concludes in the shady Place Charles de Gaulle. This peaceful green park is where the French President delivered his Liberation Speech in June 1944. Bayeux was chosen as it was the first town in continental France to be liberated by the Allied Forces. It quickly became the crossroads for Allied servicemen returning home.

Bayeux’s Cathedral Notre Dame is the hub of the town and is definitely worth a closer look. This magnificent architectural ensemble displays a motley combination of Romanesque and Gothic styles. Check out the elaborately detailed tympanum as you enter the main portal. The 12th century Chapter House still has its original glazed and decorated tiles, yet is not the oldest part of the building which sits on a former Roman site. The lofty choir and transept boast resplendent stained glass windows by Escoffier. Steps lead down to the columned crypt where original murals, preserved in darkness, still retain their earthy colours. Elsewhere in the cathedral, informative photo boards provide a potted history of Old Bayeux with many interesting facts and wartime images.
It’s important in Bayeux to absorb the role the area played in the two World Wars. Guided tours of the Landing Beaches and War Cemeteries, the Normandy ➤ Battle Memorial Museum and the Memorial of the War Reporters are recommended to get the full picture. The lace and porcelain exhibits at the Musée Baron Gérard, and the plethora of street art and sculptures also celebrate the city’s unique heritage. 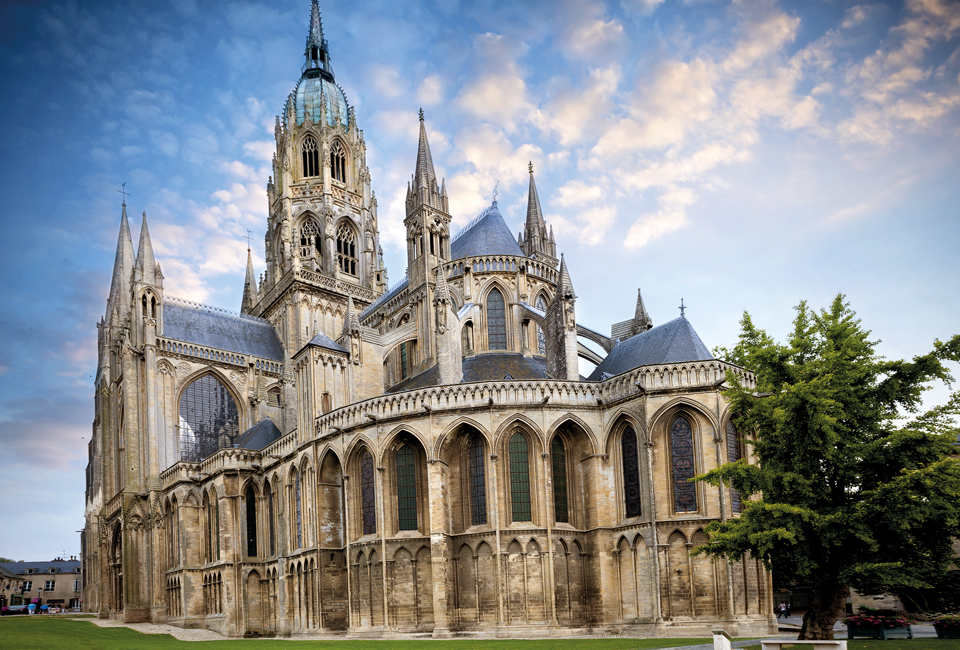 Historians can pore over the details of the 11th century conquest of England by Guillaume le Conquérant, Duke of Normandy, in the famous 70-metre-long hand-stitched Bayeux Tapestry. Alternatively, a stroll around the outdoor market on Saturday morning is a real treat. Local producers offer their finest produce and Normandy cheeses and seasonal fruits make a particularly attractive souvenir.

Staying in a luxury Chambre de Hôte, former abbey or restored chateau reinforces Bayeux’s historic charm. The elegant Chateau de Bellefontaine sits behind wrought iron gates in beautiful gardens complete with black swans gracing the private lake. Closer to the town centre, the 18th century Les Glycines offers a homely setting in a family-owned Chambre d’Hote (B&B), just steps from the main thoroughfare on Rue Saint-Martin. Foodies may prefer the elegant atmosphere and classic façade of Hotel de Luxembourg in the Old City, complete with gourmet restaurant Les Quatre Saisons.
Dining out in Bayeux can pose a problem, but only because there are so many delectable restaurants showcasing the freshest Normandy fare. This area leads the way in harvesting mussels, oysters and scallops. The proximity of Bayeux to the fishing fleet based in pretty Port-en-Bessin-Huppain pretty much guarantees that the Catch of the Day does indeed live up to its name.
While locals enthuse about their tasty chitterlings and tripes à la mode (tripe braised in cider and calvados), the more refined British palate may prefer agneau de pré-salé (meadow-salted lamb) or the volaille à la Normadie (poultry dishes in a cream and butter sauce). Local apples invariably make an appearance on the menu as open-topped tarte de pommes or in liquid form in aged XO Calvados and sparkling cider.

The best time to visit Bayeux weather-wise is from late spring through autumn, when temperatures are pleasant for enjoying the outdoor lifestyle. The driest months are March, April and September and the busiest months are June, July and August. However, you might want to plan your visit to Bayeux to correspond with some of its festivals and events, depending on your personal interests.
The annual D-Day Festival is celebrated around June 6th followed by the popular Medieval Festival of Bayeux with a parade and market in early July. The “Lights of Liberty” retell the story of the freedom of Normandy through a Sound and Light Show in July and August. In winter, the WordSeed Arts Festival and the International Circus Festival represent the broad diversity of local events. Wider interests are satisfied with the All a Hay multicultural festival in late July and the Bayeux-Calvados Awards Ceremony for War Correspondents in October.

Further afield, Normandy offers scenic train rides, golf courses, horseriding, traditional beach activities and a taste of Normandy’s produce in fromageries, apple orchards, cider cellars and local delicatessens. It’s a region that has much to reward the curious traveller, and is well worth exploring any time of year. ✱