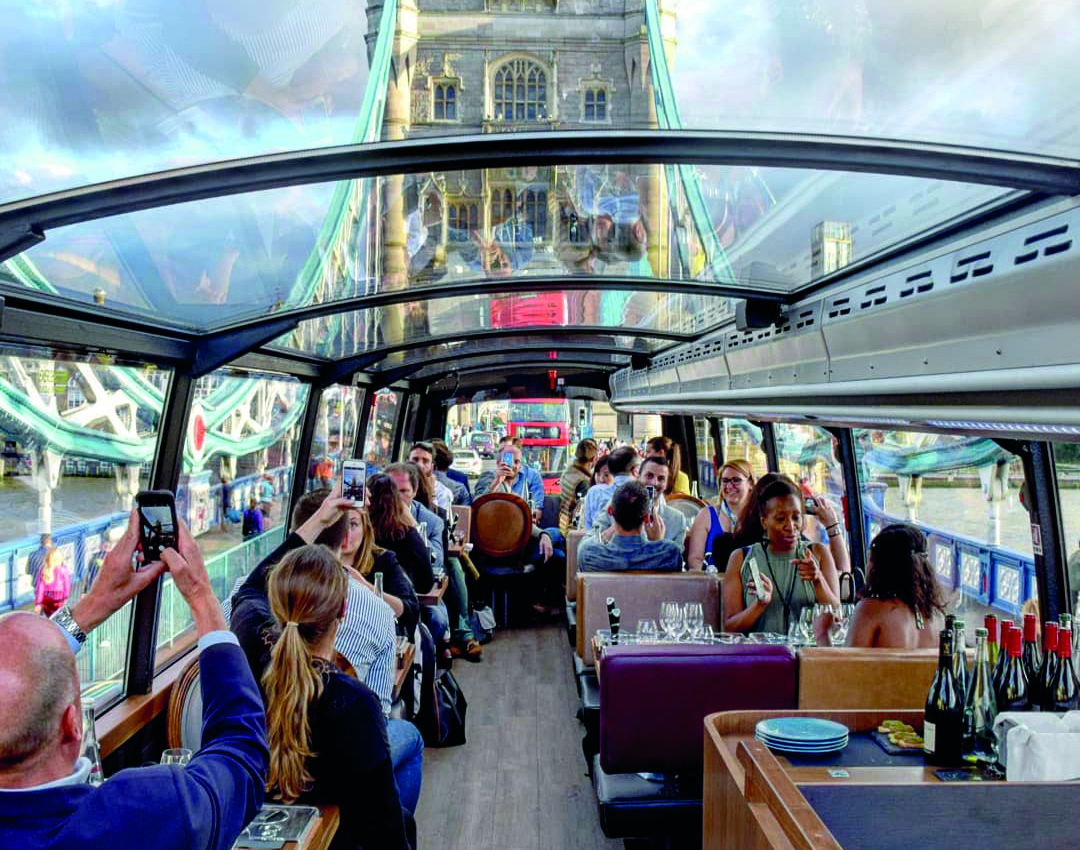 Bustronome is the only gourmet experience of its kind in London, having started life in Paris five years ago. In a nutshell, guests enjoy fine-dining as they travel in style around the cities’ major attractions and landmarks on the top deck of a hi-spec, glass-roofed bus.

The idea came to co-founders Jean-Christophe Fournier and Bertrand Matthieu after wondering how to take pop-up food carts to the next level. The food at pop-ups is often fantastic, but the shine can be taken off by not having anywhere comfortable to sit. Once seated, Mathieu felt he was missing out on the sights of the cities he was in. So, why not combine the best of it all?

Come rain or shine in the British summer, Bustronome has the perfect ambience for dining in the city – it is a truly unique and romantic experience. The current summer menu offers six clean and fresh courses to savour while  enjoying the best sights of London:

Discover the most iconic views of London whilst enjoying the best of its gastronomy, whatever the weather! Use audio pens to touch landmarks on map menus to learn fascinating facts about the city. The experience is a great way to get to know London, for local and foreign travellers alike.

There are two buses so far in London. Each is custom built and to a high standard – think Orient Express. There is a maximum of 38 people, all seated on the top deck, giving every guest a 360° view. The downstairs has the kitchen at the rear and a guest loo towards the front.

The tour starts at Embankment and heads east to Tower Bridge and West to the Royal Albert Hall, with highlights in between including the London Eye, Westminster and Buckingham Palace. Lunch is a four-course meal running from 12.15-14.00. Afternoon tea runs from 15.00-16.45 and dinner is more leisurely, from 19.15-22.00.

Bustronome also caters for special events such as birthdays and anniversaries. It also handles private hire for groups taking in a West End show or looking for something different as a corporate occasion with champagne reception, VIP transport, the lot. A bespoke programme can be put together including special menus, different routes, themes and music/DJ.

Speaking of special menus, the autumn update, launching on 9 September, is set to turn a few heads with Executive Chef Olivier Ruiz providing a London twist to mark the season:

The smoked haddock and eel will be courtesy of Forman’s, the oldest London Cure restaurant in the UK. Cheesecake is often thought to be British or American but is in fact it is Greek, surfacing in London around 1390. The Greeks used it to feed athletes before the games and it was not widely used in the UK until the 17th century. William the Conqueror brought his chef to England for his coronation meal to serve a Norman speciality, civet-off mussels and the chicken ballotine is inspired by that served at the wedding of Prince Charles and Lady Diana at St Paul’s Cathedral, the first wedding held there in 500 years. Truffle, as we know, was one of Queen Victoria’s favourites, alongside the sponge named after her.

Looking ahead, Bustronome London aims to catch up with their sister in Paris by increasing the number of buses on the road – Paris has four. Future plans include expanding into other major cities such as New York, Las Vegas and Madrid. Where would you like to see Bustronome on your travels?