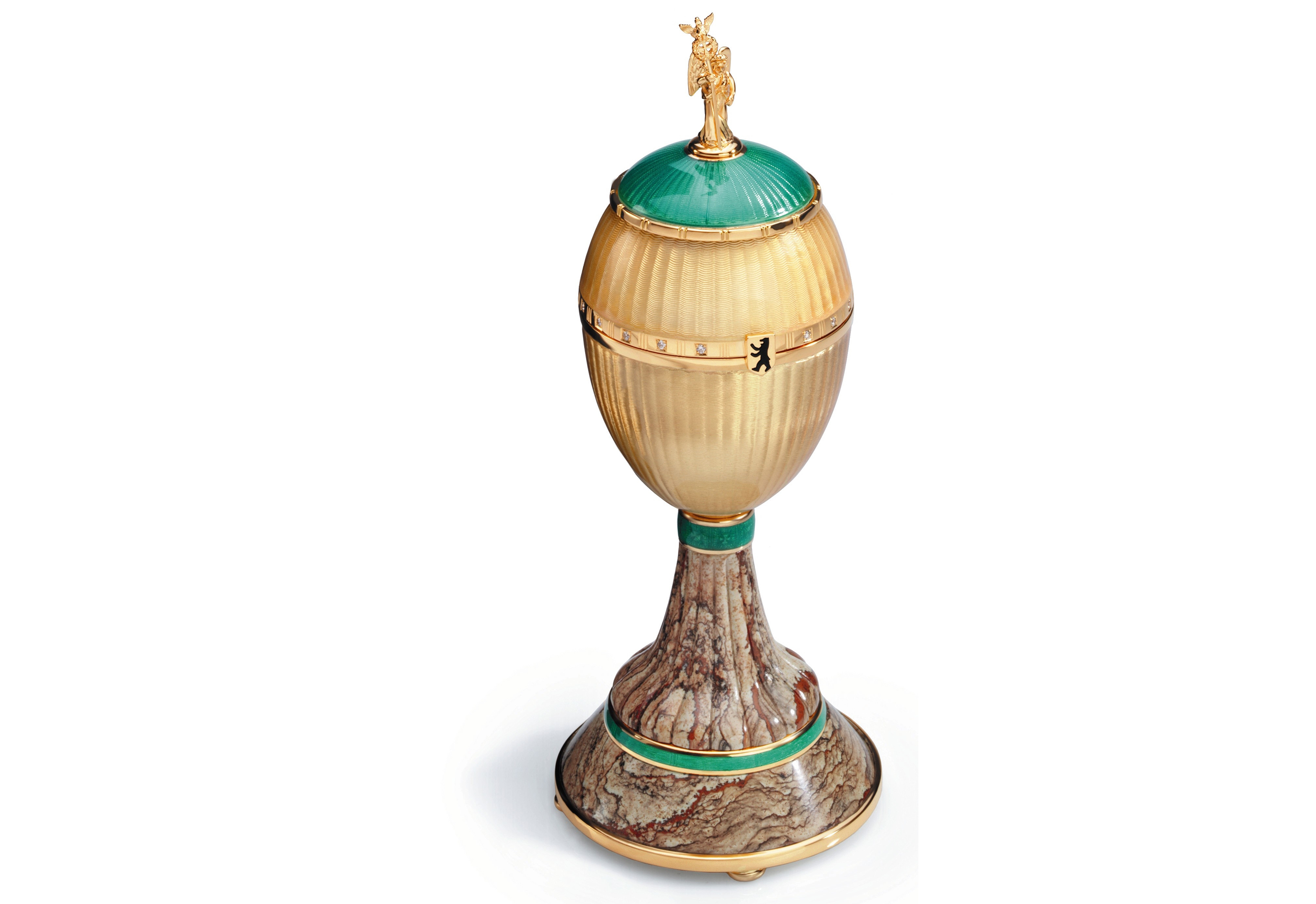 The Pforzheim Jewellery Museum’s collection now boasts a priceless new exhibit from a special limited edition: a Brandenburg Gate Fabergé Egg. This outstanding piece was created in 2002 by the former work master of the Victor Mayer company, through a collaboration between Fabergé and Juwelier Leicht, and it has now been presented by the jeweller Georg Leicht and his brother Stefan as a permanent loan to the Museum Director Cornelie Holzach to mark the 30th anniversary of the fall of the Berlin Wall.

The 25 pieces in this edition were produced in 2002. Back then, Juwelier Leicht presented the egg in Berlin in the presence of numerous prominent guests such as Dr Lothar de Maizière, SKKH Dr Géza von Habsburg, the Russian Ambassador Sergei B. Krylov and Saxony’s Minister President Kurt Biedenkopf. The whole edition was soon sold out, and only one piece – the egg now on loan to the Pforzheim Jewellery Museum – remained in Stefan Leicht’s possession.

The Pforzheim jeweller commented: The Brandenburg Gate is a national symbol. Initially built as a city gate, it became a symbol of imperial Germany, of national hubris, defeat, division and finally a brilliant symbol of reunification. We wanted to create a monument for this symbol. 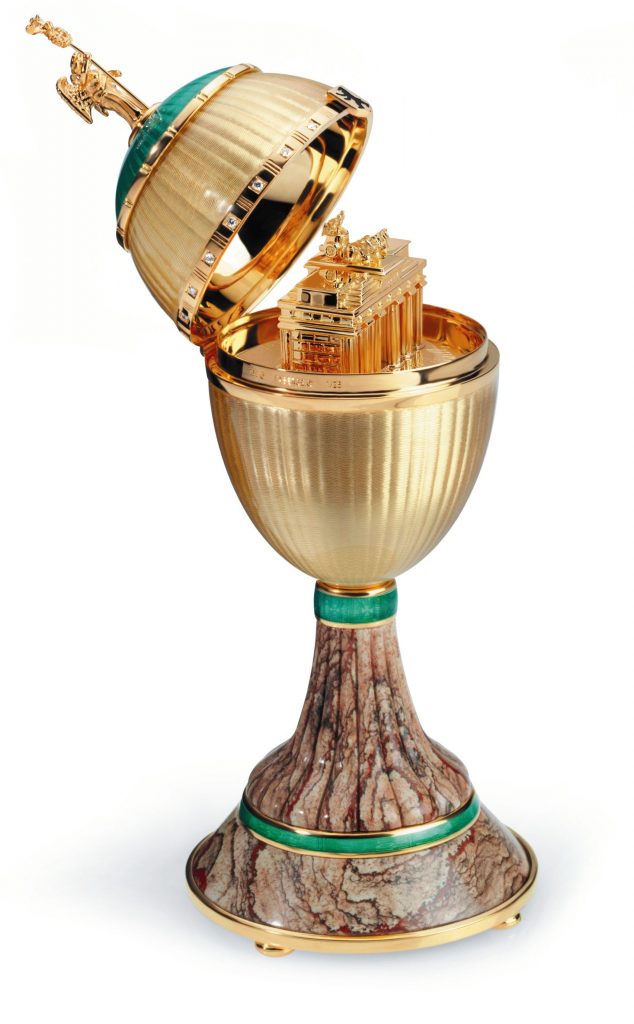 Inside the artwork of gold, brilliants, enamel and jasper, there is a faithful miniature model of the Brandenburg Gate. The special edition is crowned by the goddess of peace Eirene, also in gold, and the Berlin bear makes an appearance as an enamel miniature on the city’s coat of arms. A unique engraving was added to each piece, referring to the history of the division and reunification of Germany and Berlin. These are some of the quotations that were engraved on the pieces:

»Jetzt wächst zusammen, was zusammengehört« (Now what belongs together will grow together) Willy Brandt 1989

And there is a special story behind the engraving on the egg now on display in the Pforzheim Jewellery Museum: Stefan Leicht, brother of the jeweller Georg Leicht, studied in Berlin in the 1980s. On 9 November 1989 he was among the demonstrators that gathered on the West German side of the Brandenburg Gate.

When we heard that the wall was about to be opened, I was among the first people to climb onto it, remembers Stefan Leicht. And then I was one of the first to jump down onto the East German side and I ran towards the Brandenburg Gate. The border guards just stood there with their machine guns and were just as bewildered as we were. But they did nothing to stop us. It was an unbelievable feeling of joy – and an incredible stroke of luck that the border guards kept their cool and nothing happened.

Stefan Leicht was therefore one of the first to go through the Brandenburg Gate on the night of 9 November 1989. Many years later he told his brother how he would love to acquire one of the pieces from the limited edition. Georg Leicht agreed and smiled: I have chosen a special engraving for you.

Stefan Leicht was overwhelmed by emotion when he finally held the piece made specially for him in his hands a few months later. His brother had had the words “Ich war dabei – Stefan Leicht, 9 November 1989” (I was there) engraved on the egg.

The Fabergé Egg with the Brandenburg Gate is now on display in the Pforzheim Jewellery Museum as a wonderful reminder of the day the course of German history changed.