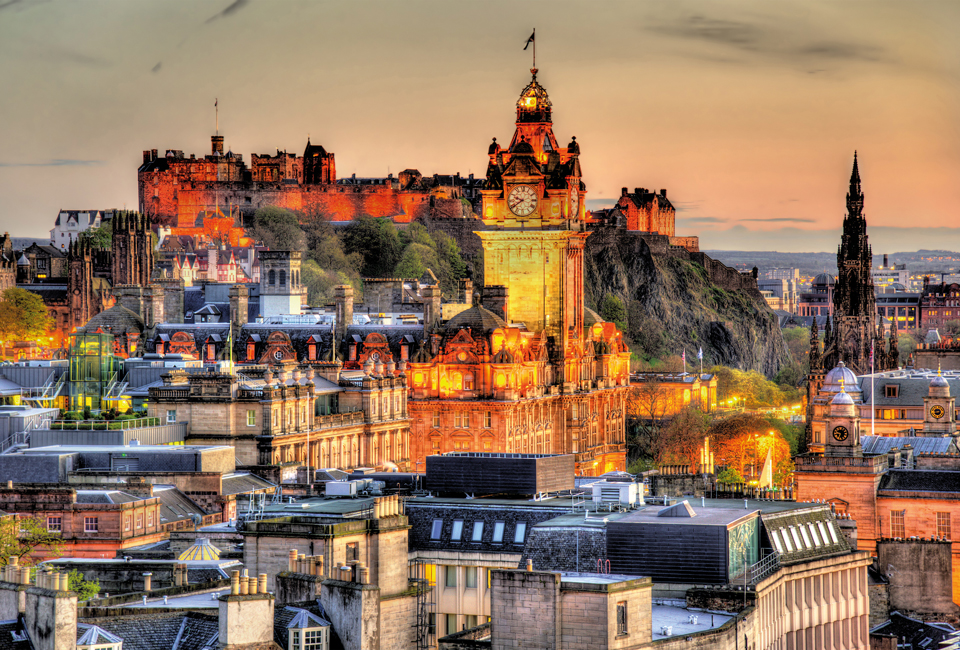 Edinburgh stands as a cultural and economic powerhouse, showcasing the best Scotland has to offer to over one million overseas visitors each year. Second only to London in terms of tourist numbers and financial clout in the United Kingdom, dozens of historic and internationally renowned institutions can be found in this hilly city.

From the Palace of Holyroodhouse, the Queen’s official residence in Scotland, to the sixth-oldest university in the English-speaking world, the University of Edinburgh, and the imposing Edinburgh Castle sitting on Castle Rock, Scotland’s capital city is brimming with cultural delights.

The profile of modern Edinburgh has been lifted by the annual Edinburgh Festival Fringe. The “Fringe” is now the world’s largest arts festival and takes over the city throughout the month of August, featuring artists, comedians and performers who display their work in over 3,000 shows at more than 300 venues.

The Scottish capital’s literary tradition is alive and well, with a rich group of famed writers calling Edinburgh their home over the years. From crime writer Ian Rankin to acclaimed novelist Sir Walter Scott and Sherlock Holmes creator Sir Arthur Conan Doyle, the city’s role in forming leading literary greats has been pivotal.

Of course, Harry Potter author J. K. Rowling is probably the most well-known Scottish writer to much of the younger generation who grew up reading her epic adventures. Rowling wrote her first book at The Elephant House Café on George IV Bridge, and finished penning Harry Potter and the Deathly Hallows in room 552 at The Balmoral Hotel.

Between old and new

Few historic properties have endured as elegantly as Edinburgh’s grand dame, the 5-star Balmoral. Located at the end of prestigious shopping thoroughfare Princes Street, mere steps from Edinburgh’s Waverley train station, Balmoral has retained its old-world glamour and style, without looking dated or out of touch.

Since opening in 1902, the hotel has welcomed the great and the good, including Sophia Loren, Elizabeth Taylor and Paul McCartney, as well as the Queen Mother, who would pop in for lunch from time to time. The rooms and suites are perfectly adorned and easy to settle into, but the simply stunning views over Edinburgh Castle, Arthur’s Seat and Princes Street turn any stay into an experience.

Brasserie Prince by Alain Roux is a recent addition to the Balmoral, after father-and-son team Michel Roux OBE and Alain Roux opened the classic French dining destination in June 2018. As can be expected, fare consists of traditional French favourites, including the likes of sautéed frogs’ legs Provençal with garlic and parsley, and Parisian gnocchi gratin made with cheese pâte à choux and béchamel sauce, all made with the finest Scottish produce.

Set on St Andrew Square in a luxurious former bank building, newly-opened 5-star apartment hotel The Edinburgh Grand couldn’t be in a better location. Decidedly modern designs will suit even the most demanding luxury traveller, with the over 50 apartments all offering a unique view of the city.

A two-minute walk from The Edinburgh Grand sits The Ivy on the Square, which offers a relaxed and casual dining experience, with views over St Andrew Square in the heart of the city. Modern British cuisine is available from breakfast to dinner with stand out dishes from the à la carte menu including Wasabi prawns with salt and pepper squid, grilled whole lobster and melting chocolate bombe. A very reasonably priced set menu runs on week days from 11:30am to 6:30pm and is a great time to visit for a quick lunch.

An outpost of Knightsbridge shopping haven ™ Harvey Nichols is found opposite The Ivy, as well as luxury shopping area Multrees Walk. A wide range of international designers, including Louis Vuitton, Burberry and Mulberry, can be found along Multrees Walk, with Harvey Nichols offering five floors of high-end fashion, beauty and food delights.

Nearby Jenners is perhaps Edinburgh’s most iconic department store and is the oldest of its kind in Scottish. Nicknamed “Harrods of the North”, this stunning Victorian building plays host to premium international brands, as well as offering traditional handmade Scottish goods. The top-floor food-hall is a great place to grab some last-minute gifts for back home or to enjoy some rest and relaxation at the on-site Regis Spa, where visitors can sample a range of holistic and Hydradermie treatments.

After undergoing a major £8.5m expansion earlier this year, Ten Hill Place Hotel now stands as the largest independent hotel in Edinburgh. The 129-room 4-star hotel is close to attractions in the Old Town and easily accessible for city centre restaurants, museums and sites.

Close to Brasserie Prince, and walkable even in Edinburgh, sits the Museum on the Mound. Located in the Bank of Scotland Head Office building and owned by the banking group, the museum focuses on the history of banking in Britain and holds exhibits on the rise of building societies in the 19th century, the advent of life assurance, and how work has changed over the years.

The Mound itself was created in around 1765 when more than 1,500,000 cartloads of excavated earth was dumped into Nor Loch. Today, the artificial hill links together Edinburgh’s New and Old Towns and houses a number of historical institutions, including the National Gallery of Scotland, the Royal Scottish Academy and the University of Edinburgh’s New College. Ever-popular Edinburgh Castle deserves a mention as one of the city’s preeminent landmarks, with time-poor travellers needing to set a few hours aside to see all this fortress has to offer.

Deluxe 4-star Apex Waterloo Place Hotel is within walking distance of the castle and sits at the east end of Princes Street. Apex has come a long way since it was built in 1819 as Edinburgh’s first purpose-built hotel and offers contemporary and spacious rooms, alongside relaxing treatments at the on-site PURE Spa.

Located in the shadow of the castle is contemporary fine dining destination Castle Terrace. The restaurant underwent a complete makeover at a cost of £1m in 2016 to add modern hand-painted wallpapers and a mural illustrating Edinburgh’s iconic skyline to the walls to help establish a refined atmosphere. The decor may be impressive but the cuisine offered by chef patron Dominic Jack easily surpasses its surroundings, with the menu following a seasonal “from nature to plate” philosophy.

Simple, yet beautifully plated, seared hand-dived Orkney scallops are served with fennel and orange for starters, followed by tagliatelle of Scottish fish and shellfish with fresh peas, and finishing off with sweet Blacketyside Farm strawberries and cream with a Victoria sponge.

All-suite apartment hotel Eden Locke provides a laid-back experience for visitors who want an uncomplicated, but chic, stay. Minimalist style rules throughout, thanks to New York architects Grzywinski and Pons creating a muted residence in the heart of Scotland’s capital.

Goan fish fry is a popular appetiser in Goa, seeing fish marinated with corn flour batter and exotic spices and then shallow fried, with locals and visitors alike now getting to sample this unique recipe in Edinburgh. A clear favourite is the prawn Malabar, a recipe from the South Indian coastal region of Malabar, which consists of succulent prawns cooked in coconut milk, tamarind, mustard seeds and curry leaves.

Thanks to its compact nature, even guests on a short break in Edinburgh can experience some of Scotland’s finest sights. It’s a place to enjoy great food and be immersed in a cultural atmosphere unique to this elegant city.