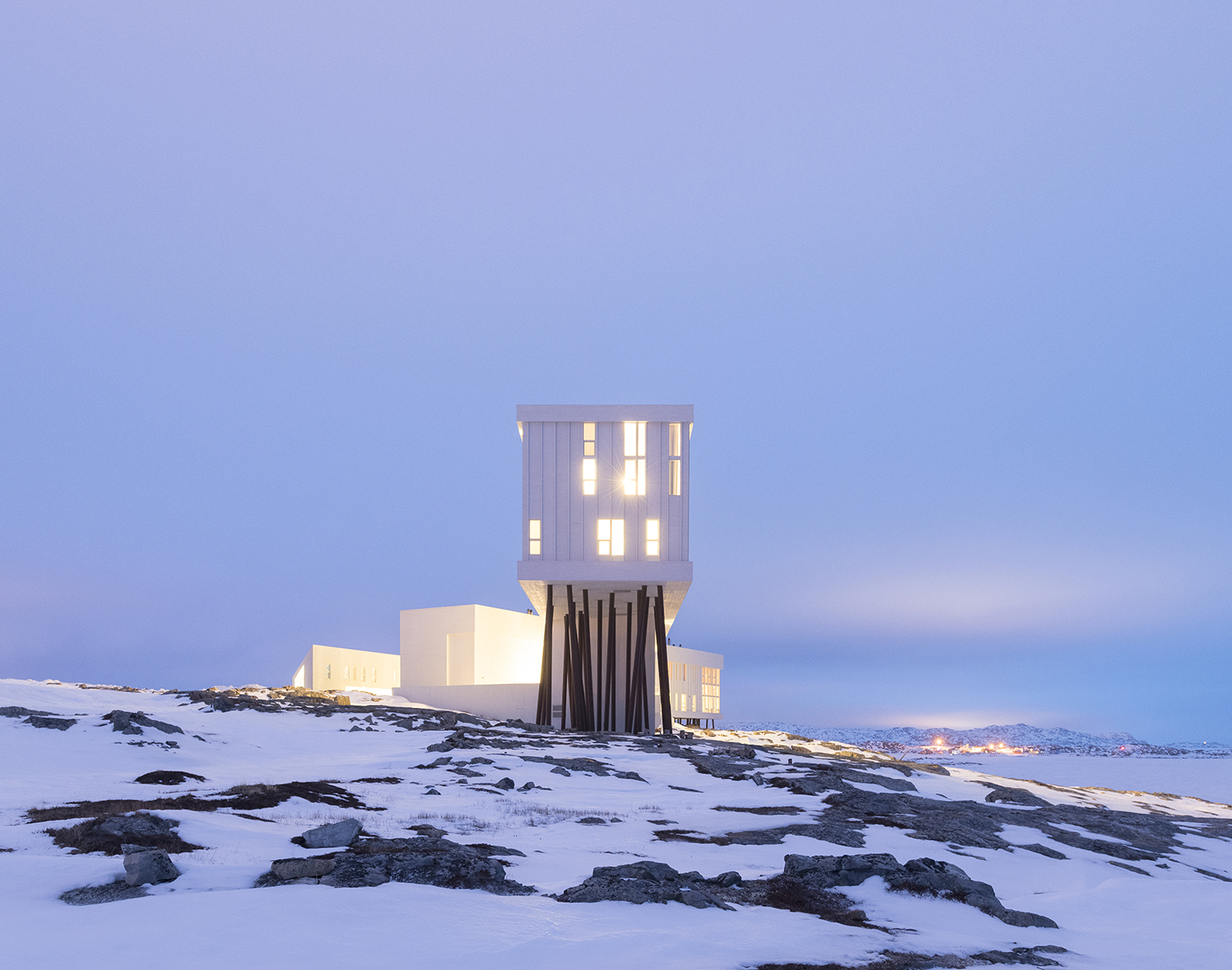 It is blustery and snowing outside, but I’m warm and cosy by a wood-burning fire, sitting in a boat-inspired punt chair, wrapped in a colourful patchwork quilt. From my third-floor room at Fogo Island Inn, I gaze out the window onto a jigsaw puzzle of pack ice, its pieces drifting in slow motion. The sky is like a Monet of soft white clouds floating in a sea of pale greys. The elements outside may not sound as inviting as a warm summer day or a spring bloom, but in a time where we are always plugged-in and on-the-go, this weather encourages contemplation and calm.

Rugged and windswept, Fogo Island is Newfoundland’s largest offshore island, and has its own set of seven distinctive seasons. The winter months tend to be the quietest, but also reveal some of the island’s best secrets. Originally settled in the mid 18th-century, Fogo Islanders subsisted on the inshore cod fishery, working as families and building their own wooden boats. When the fishery collapsed in the beginning of the 1960s, the islanders were pressured by the provincial government to resettle and look for job opportunities elsewhere. At a time when many had given up on rural Newfoundland, eighth-generation Fogo Islander Zita Cobb returned to her roots in the mid 2000s. Determined to expand the economy beyond fishing, Cobb looked to the island’s bountiful ‘cultural capital’ for inspiration. She started Shorefast, a charity dedicated to cultural and economic resilience, then she launched an artist-in-residency programme and a 29-room inn that returns all profits to the charity to fund initiatives that include a micro-lending fund for businesses on the island. 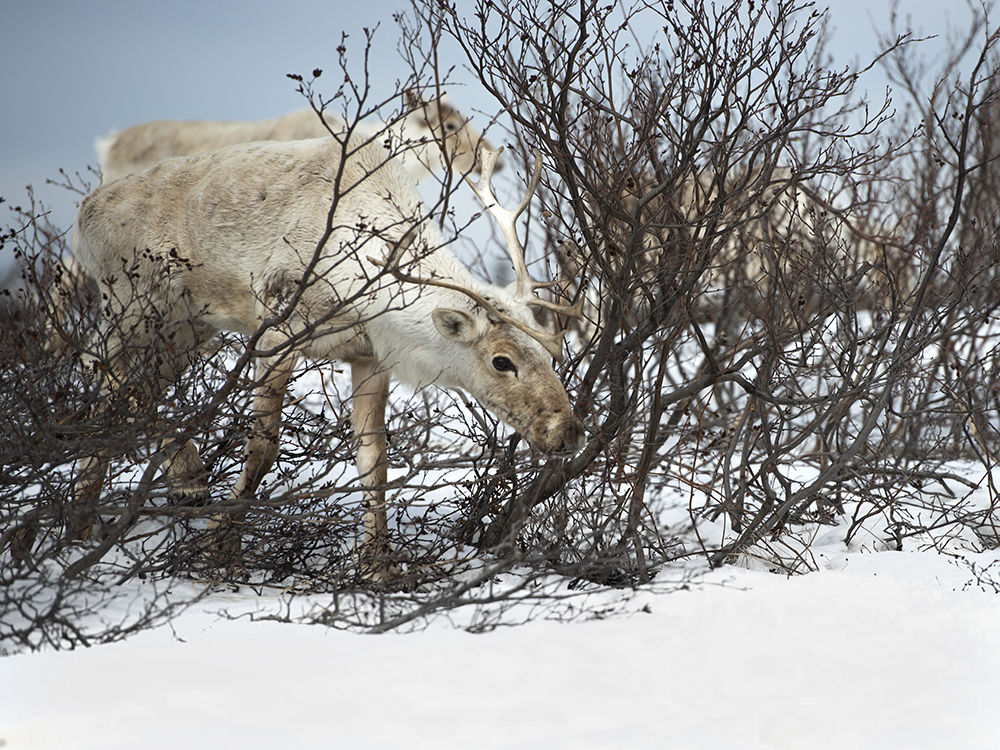 A day in the life

Set on a rocky outcrop, Fogo Island Inn is a four-story property modelled after the island’s fishing stages – small buildings that rest atop stilts. Its modernist, stark-white design draws both architecture aficionados and curious travellers like myself, who are drawn in by the inn’s locally sourced meals, rooftop sauna and community-based adventures. The inn is currently responsible for around 240 jobs on the island and its community network makes my visit all the more memorable. Most of the year, life on the island revolves around the sea, but when the snow starts to fall, locals retreat to their cabins and bond around simple pleasures – meals, songs, afternoons spent ice fishing. On my first day I get a taste of cabin life with my community hosts, Aiden, Phil and Fergus Foley. The brothers grew up in the Irish community of Tilting and like most islanders have genuine, salt-of-the-earth personalities.

They kit me out in a weather-proof survival suit for our Ski-Doo adventure into the island’s interior. We pass tracks from the island’s resident caribou and Phil points out the pond the brothers played hockey on as kids. Deep in the woods, the men set up a traditional boil-up – essentially a winter picnic. Fergus collects wood for our fire and once the flames are going, he carefully packs foil with cod that’s been salt-cured for three weeks. Toast with butter and jam accompanies the smoky, salty fish, which Fergus encourages me to coat with butter. Phil hangs small metal cans above the fire to heat water for tea and we strap on potlids, old-school snowshoes, to search for branches to roast marshmallows for dessert.

After lunch, Phil invites me back to his ‘shed’, a remote cabin he built by hand at age 18. The interior resembles a museum of island artefacts, including antlers, ice drills, and wooden anchors called killicks. Aiden finds and old guitar and sings us ‘Patties Malone’ and other Irish tunes while Fergus breaks up massive hunks of ice for cocktails. The day is delightfully unscripted, unlike any other luxury lodge excursion I’ve experienced.

Retreat to the warmth 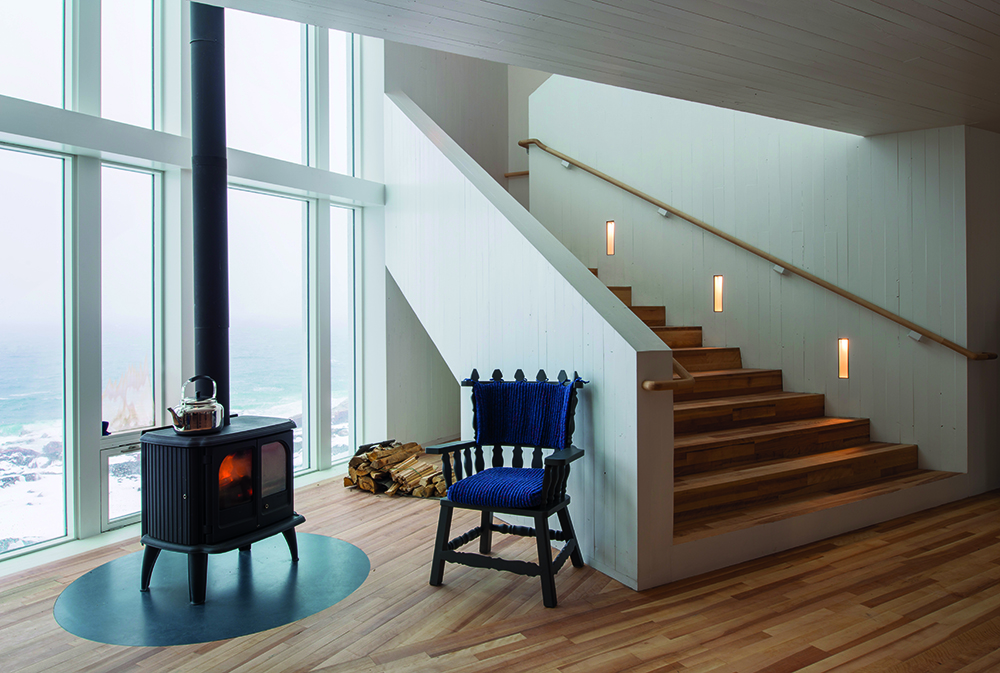 There is so much to discover inside Fogo Island Inn – this is a property rich in its legacy of craftsmanship and island history. Nearly all the furniture is a collaboration between international artists, designers and local artisans. Even the wallpaper, patterned with seabirds, berries and lighthouses is a nod to island culture.

The Shed is a new gathering space a short walk from the inn, which provides the setting for great meals, often hosted by husband and wife fishing team Aubrey and Marie Payne. Chef Jonathan Gushue’s cooking is a delicious haute counterpoint to Fogo’s rustic boil-ups. His menus integrate the island’s culinary traditions, like pickling and preserving, and showcase local ingredients, like moose and cod tongue. While guests feast on scrambled egg with uni, cod cheek tempura, and poached crab with celeriac, the Paynes tell tales of deep-sea fishing and explain new sustainable fishing techniques, such as the use of cod pots.

In many ways, Fogo Island Inn is far more than a hotel. It is a place for reflection and renewal, a base for families to bond over ice skating and tobogganing. It is a source of community pride, a lesson in sustainable travel and a tribute to the island’s food, art, architecture and local hospitality.