Combining timeless elegance and quintessentially British traditions, the Aspall Tennis Classic allows its guests to experience tennis in true style and enjoy some of the sport’s most loved players. Certain to spark the interest of the crowd is Tomas Berdych, current World No. 14, who will return to the event this year. Turning pro in 2002, Berdych has had an impressive career to date. Highlights include winning the Paris Masters in 2005 as an unseeded player, defeating Ivan Ljubicic in the final and reaching the semi-finals of all four Grand Slams. The Czech player also reached the Wimbledon final in 2010, beating top seeds Roger Federer in the quarter-finals and Novak Djokovic in the semi-finals.

Accompanying Berdych is German player Tommy Haas, who across his 21-year career as a professional player has claimed 15 titles including a Masters tournament. Other highlights include reaching the finals of the Australian Open three times (1999, 2002 and 2007) and the semi-finals of Wimbledon in 2009 where he faced Roger Federer. His career high came in May 2002 where he ranked World No. 2 in singles.

Owned and managed by IMG, the Aspall Tennis Classic at Hurlingham takes place at the height of tennis season, the week prior to Wimbledon. Set in the tranquil 42-acre grounds of The Hurlingham Club, it has become one of the most intimate tennis events in the social calendar, showcasing some of the current stars of today, playing in a series of singles exhibition matches as they finalise their preparations ahead of Wimbledon, as well as several legends.

2017 will mark the 24th staging of the event which over the years has become one of the world’s most star-studded tennis exhibitions, tying together premier hospitality with a stellar player line-up that has boasted tennis’ biggest stars of the past, present and future. Over the years, some of the sport’s best players have competed at the event, including Grand Slam champions Andy Murray, Rafael Nadal, Stan Wawrinka, Marin Cilic, as well as Jo-Wilfried Tsonga, David Ferrer, and next generation stars Grigor Dimitrov and Nick Kyrgios. The event has also been popular with the celebrity crowd, with those who have been spotted enjoying the summer activities including Emilia Fox, Kelly Hoppen, Dougie Poynter, Sol Campbell and Kara Tointon.

IMG is a global leader in sports, events, media and fashion, operating in more than 30 countries. The company represents and manages some of the world’s greatest sports figures and fashion icons; stages hundreds of live events and branded entertainment experiences annually; and is a leading independent producer and distributor of sports and entertainment media. IMG also specializes in sports training; league development; and marketing, media and licensing for brands, sports organizations and collegiate institutions.

Innovation and invention have been at the heart of Aspall ever since Clement Chevallier arrived at Aspall Hall in 1728 to set up his new cyder business. Now one of the oldest family businesses in the UK, Aspall is run by the eighth generation of the family, Barry and Henry Chevallier Guild. While upholding the same exacting standards set by Clement nearly 300 years ago, the business has continued to innovate and improve. Today, with its immense heritage, Aspall is recognised as a brand that values its past while enthusiastically embracing the future. Aspall cyder is still pressed, fermented, blended and bottled on site at Aspall Hall but by embracing new ideas and technologies it continues to produce the very British world-class cyders, juices and vinegars for which it is celebrated. www.aspall.co.uk 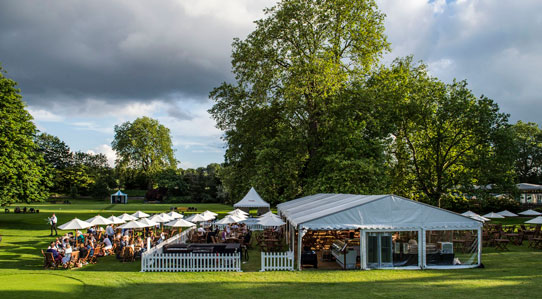 About The Hurlingham Club

Set in 42 acres of magnificent grounds on the border of the Thames in Fulham, The Hurlingham Club is a green oasis of tradition and international renown, effortlessly combining timeless elegance with state of the art event facilities. Steeped in grandeur, the Hurlingham Club is not only a private members’ club, but also a venue for hire. Home to events such as the Aspall Tennis Classic and the Wimbledon Ball, The Hurlingham Club is available for corporate and private events.