Imagine what kind of watch could be produced armed with a blank canvass and 30 years of watchmaking experience in the world of extreme sports?

That was the question Alex Brown and Ian Elliot asked themselves back in 2010. It ignited a spark so bright that in 2013, they left their jobs to start Elliot Brown Watches.

It could be assumed that in today’s crowded marketplace of established brands and smart-watches, it would be nigh-on impossible to compete in the analogue watch sector, but four years into their venture, Elliot Brown is bounding from success to success.

“Producing virtually bullet proof, every-day watches is our passion. Not everyone wants an appliance or a huge icon on their wrist and our customers tell us they really appreciate the subtle details that we obsess over. It’s what helps make a watch special to it’s owner and that’s definitely a factor in our success – making watches that have character and substance that last for years and develop a kind of fingerprint all of their own,” says Alex Brown, horologist and co-founder.

Since launching in 2013 with their popular Canford and Bloxworth collections, last year saw the introduction of the brand’s first self-winding automatic, the Tyneham, with a shift in price from the £300-£600 mark to £800.

Brown continues: “We don’t focus group or carry out market research – preferring instead to allow the purest ideas to reach production with no watering down. The Tyneham is exactly that – everything we know distilled into an automatic watch. We designed the collection and committed to buying movements 10 months in advance. The risk paid off and soon after launching the collection in October 2016 it sold out.”

The Tyneham is currently available to pre order, a new batch will be available from May 2017 complete with numbered limited edition display back models.

Mounting a precision mechanical movement inside a shock absorbent housing presented some technical challenges. Every watch Elliot Brown produce has to pass stringent shock and pressure testing – being smashed by a 3kg pendulum mallet and dunked in water at 200 metres or 300 metres of pressure are just two out of many tests designed to replicate harsh working conditions. The Tyneham had to stand up to the same punishment and features a number of innovations to help keep it looking good for years. There’s a scratch resistant, hardened outer bezel that’s six times harder than regular 316L marine grade stainless to protect the 2mm anti-reflective sapphire crystal and there’s yet more sapphire crystal on the reverse of some models providing a widow into the movement’s beautiful workings. 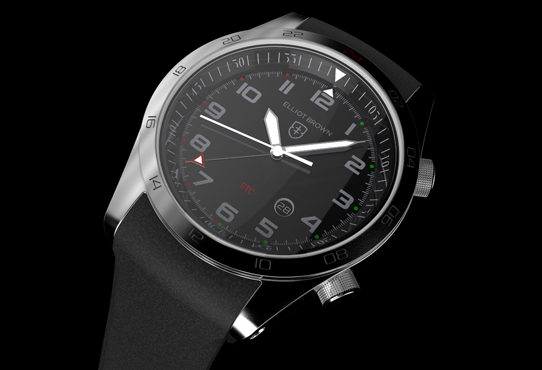 Not resting on their laurels, a smaller, 38mm unisex collection called the Kimmeridge launches early this summer, aimed at those who prefer a smaller, more elegant timepiece and for their female audience. It uses the same Swiss quartz movement as the Canford collection complete with shock absorbing movement housing and triple sealed crown to keep water and dust out.

Dorset’s coastal lifestyle forms a key part of the brand’s ethos; with collections adopting local place names each with its own significance. The new Kimmeridge is named after a village on the Jurassic coast where the founders enjoy time in the water whenever there’s a wave or when the weather permits, an evening BBQ by the sea.

“It’s one of those special places I hold particularly close having surfed there since moving to Dorset in the late 80s,” says Ian Elliot.

Elliot Brown is very proud of its associations with explorers, athletes and organisations who share a common spirit of adventure. Their watches have crossed continents, rowed oceans, dived Arctic waters, summited the tallest peaks and survived tropical jungles.

For the great outdoors

In 2015, Elliot Brown launched their first collaboration with Mountain Rescue England and Wales (MREW). A special edition based on their Canford collection, it raises £36 for the charity from every sale and is worn by many of the MREW members.

Also in that year, Elliot Brown were asked if they would like to become the official timekeeper for the Clipper Round the World Yacht Race and jumped at the chance – producing their first limited edition watch worn by skippers and crew as they battled their way around the globe in one of the toughest challenges there is.

Such was the success of the collaboration during the 2015-16 edition of the race, an agreement was quickly reached to extend the partnership for the 2017-18 race with a new flagship model and collection. The collection is named Broadstone with a limited edition crew watch called the Clipper Race UTC. Limited to just 1,000 pieces worldwide, the collection lands in August 2017 in time for the race start and has already enjoyed significant pre-orders due to the previous edition selling out.

To pre-order, visit the website or ask your local Elliot Brown dealer to reserve one for you. The race watch features an additional 24-hour hand, allowing crew to tell the time in a second time-zone such as their hometown as they battle for position around the globe. UTC stands for United Time Co-Ordinated – the time standard adopted for the race.

Starting a business producing analogue watches was a bold move back in 2013 – now it feels like a stroke of genius as Elliot and Brown enjoy success after success. Their easy to love watches, accessible character and unfaltering attention to detail is a refreshing tonic in a crowded market. 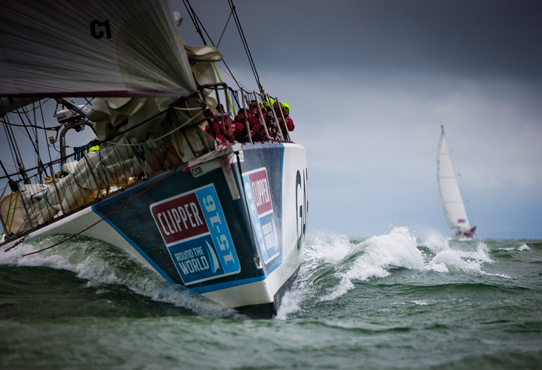