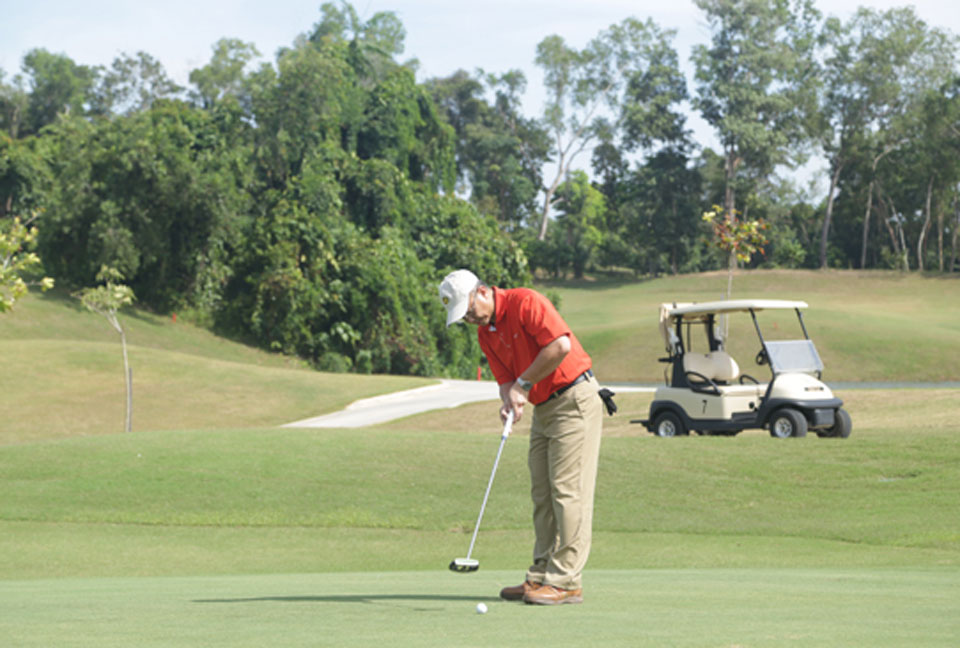 The pearl of Borneo 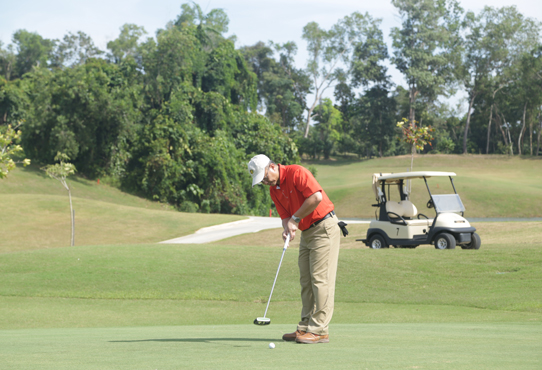 Just off the west coast of Borneo lies the island of Labuan. Officially part of Malaysia, Labuan is a tranquil, tropical island that’s much-loved for its beaches and vibrant nightlife.

It’s home to the superb Labuan International Golf Club, which offers a fantastic 18-hole course set over 200 acres of lush landscapes overlooking the South-China Sea. The course attracts players of all levels and is contested by a mix of keen tourists and the business community.

Just a short boat ride away is Rusukan Besar Island. With its swaying palm trees, this tiny slice of heaven makes an idyllic hang-out for those looking to swim in the crystal clear sea and enjoy long, lazy days in the sunshine.

Labuan is also a paradise for scuba divers who come to the island to dive four incredible sites. However, it’s not just golf and diving that attract visitors to this duty-free island, there are also a number of other notable attractions.

One of the most significant monuments of Labuan is the Peace Park. It stands steadfast as a symbol of strength, hope, reconciliation and forgiveness. It serves as both a memorial and renunciation of the atrocities of war.

Landscaped gardens and pavilions surround the memorial mound. Visitors often take a moment to reflect and pay their respects to those who suffered and perished during the war. The descendants of the Japanese army built the memorial as a way to apologise. The park also represents an olive branch between Malaysia and Japan, offering the promise of peace and harmony for all mankind and that history would not repeat itself. The sentiment of Peace Park is best captured through the poignant words carved on a stone slab: “Peace is the best”. 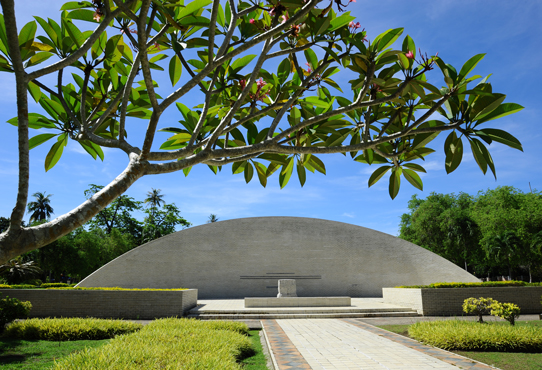 Located along Jalan Tanjung Batu lies the final resting place of 3,908 war heroes. This beautifully landscaped memorial garden pays tribute to the Australian, British, Punjabi and New Zealand servicemen as well as local heroes who fought and fell during World War II. Also laid to rest here are some of those who died during the infamous Sandakan-Ranau death march, where the Japanese marched prisoners of war from Sandakan to Ranau in 1945. The War Memorial was constructed and is maintained by the Commonwealth Graves Commission.

The manicured lawns are dotted with rows of white headstones that mark the graves, while panels on the colonnade bear the names of every soldier interned there. The memorial is regularly visited by war veterans, some all the way from Australia especially during Remembrance Day that is held on the nearest Sunday to 11 November each year, honouring and remembering the fallen servicemen.

Situated on a rise at Tanjung Kubong and built during the coal-mining era between 1847 and 1912, the Chimney stands at 106ft high and is made of more than 23,000 red bricks imported from England. Initially, the Chimney was thought to be nothing more than a ventilation shaft but recent findings have revealed that there are no traces of smoke or burning.

A peculiar structure, the Chimney has long attracted curious passers-by and has since become a popular landmark in Labuan. There are plenty of theories as to the existence of the Chimney: some say it is part of an unfinished mansion while others believe it might even be a lighthouse for passing ships. One thing’s for sure – the Chimney has become a curiosity that continues to intrigue visitors from near and far.

This archaeological mystery has won the prestigious ‘Green Apple Award 2013’ under the category of ‘Archaeological Heritage’ making Labuan the ‘Green World Ambassador’ until 2014. 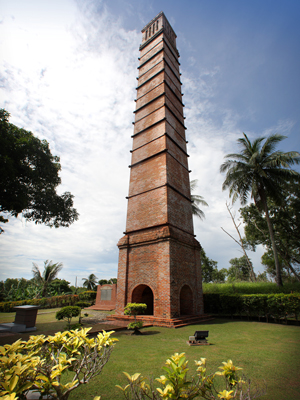 The Water Village is made up of wooden houses on stilts built side by side, connected by a boardwalk that meanders around unexpected corners. Colourful curtains frame views of the sun from dawn till dusk whilst the murmurs of residents in their kitchens preparing for another meal can be heard. Rather than the humdrum of the city and the buzz of traffic, all you hear is the chugging of a water taxi and gentle swish of a fisherman’s net being tossed into the sea.

Kampung Patau Patau 2 is no ordinary homestay experience. It is one of the few existing water villages in Labuan. These sturdy homes are built above water, using Belian hardwood as a foundation. It’s like any other village or neighbourhood, except almost everyone here relies on their boat to get around.

The village was established in the 1930s but was completely obliterated by a bombing raid during WWII. The villagers, mainly of Kedayan Bruneian descent, pooled together to rebuild the village and it has stood in these waters ever since. Visitors who come here for a homestay experience will have the pleasure of sampling traditional dishes and bask in the hospitality of host families who are more than happy to show you around.

Off the coast of Labuan are a number of wrecks. Although each site has its own sad tale to tell, time has transformed each into a stunning marine paradise offering incredible diving for all levels.

The ‘American wreck’ dates back to the end of World War II and has tragic history. The US Navy minesweeper was sunk on 9 June 1945 with the loss of nine lives. The wreck lies approximately 33 metres deep, where remnants of bullet clips, depth chargers and cannon artefacts can still be seen among the shipwreck.

The ‘Australian wreck’ dates back to 1890, when it was originally a Dutch cargo and passenger steamer. The Dutch sunk the vessel during WWII to prevent the Japanese from using it. However, the Japanese salvaged what was left of the ship and used it as a cargo vessel. It was henceforth known as ‘Imbari Maru’.

In 1944, the vessel met an abrupt end when it was attacked by the Australian air force – hence the name – and sank 23 km southwest of Labuan. It’s thought as many as 339 people died, many of whom were female prisoners, while others escaped via lifeboats. Many believe the wreck to be haunted. The ‘Australian wreck’ is now home to an amazing array of marine life with its shallowest depth at 24 metres.

Considered the most popular dive site among them all is the ‘Blue Water wreck’, which is named after the surrounding crystal blue waters, where there is incredible visibility. This once large fishing trawler from the Philippines ‘Mabini Padre’ caught fire and sank in 1981, fortunately, no lives were lost.

The corals are somewhat sparse but rich, attracting lionfish, cardinal fish, batfish and a variety of groupers among others. With its excellent visibility and wide array of marine life, experienced divers will find the ‘Blue Water wreck’ truly memorable.

The ‘Cement wreck’ is located some 21km off Labuan, east of Kuraman Island and is the shallowest among the four. The ship once transported cement to Brunei for the construction of the Sultan’s new palace until it struck a bank and sunk at about 30 metres. Her masts stand at 8 metres and the roof of the wheelhouse at 14 metres. This ‘perfect’ position makes the wreck ideal for novice divers and wreck diving training.

The site is awe-inspiring with its top half covered by a garden of soft and hard corals, ferns and sponges. Schools of small barracudas and playful batfish swirl about the mast. 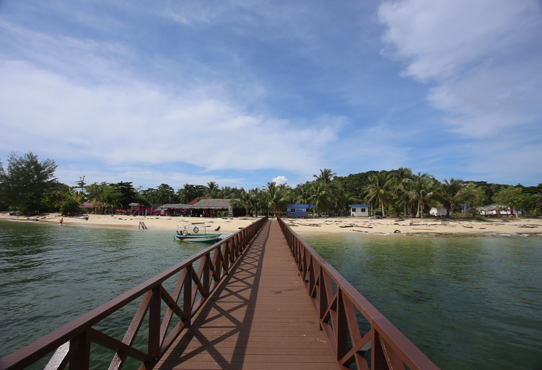