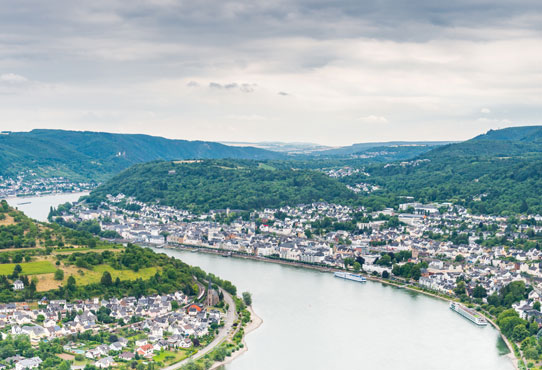 The Rhine is the longest river in Germany and is at its most scenic as it cuts through the hills of Germany’s Rhine Valley. This area of outstanding natural beauty is a popular draw for visitors. Stretching from Mannheim in the south to Koblenz in the north, it is lined with hillside castles and picturesque old towns with half-timbered architecture providing postcard-pretty scenery.

The Middle Rhine Valley is a spectacular UNESCO World Heritage Site with a history dating back to Roman times. This craggy steep-sided valley creates the perfect environment for vines to thrive in well-drained soil on the terraced hillsides, making this a dream destination for wine lovers to explore.

Ancient winemaking villages and romantic towns line the slow-moving river in a series of enchanting destinations for tourists to enjoy. Not content with producing some of the world’s best wines, the area is also known for its outstanding regional cuisine. Add wine tastings, local food markets and the largest wine festival in the world, and you have all the ingredients you need for a fascinating road trip through this westerly region of Germany from May to October.

Start in Mannheim, a city laid out grid-style in the 17th and 18th centuries, and relatively new by German standards. Landmark attractions are focused around the Marktplatz where the Old Town Hall and Lower Parish Church are comfortable neighbours with the Jewish synagogue. The extensive port offers river cruises while the historic paddlewheeler, the Mannheim, contains an interesting museum of Rhine navigational exhibits. 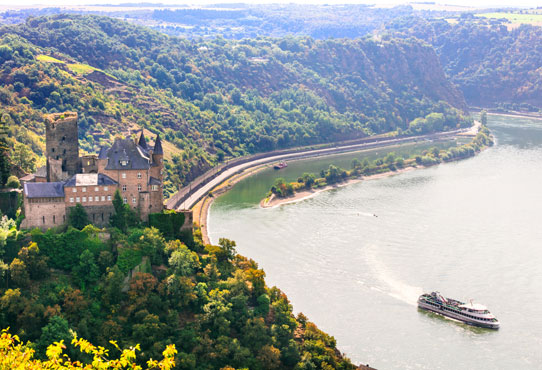 Nearby Durkheim recently celebrated the 600th anniversary of the Durkheim Sausage Market. It’s the perfect place to pick up a tasty lunch before heading off for a tour of the Weilberg Roman Villa with its ancient wine presses.

The cathedral city of Worms is one of the oldest towns in Germany. Nestled on the west bank of the Rhine, the 11th century Cathedral of St Peter is a stunning example of High Romanesque architecture with four towers and two domes. Sandstone reliefs and the baroque altar are works of art in their own right.

The compact town of Bacharach in the Rhine Gorge is worth a stop to see the ruins of Saint Werner’s Chapel, Peterskirche and the mediaeval Altes Haus. The series of towers that once punctuated the town walls are a must-see, including the Mint Tower (the town was a mint from 1214 to 1508), Market Tower and the Love Tower. In August the town hosts Culinary Summer Night and has a regular Mediaeval Market with games, roasting spits and falconry displays.

Rhineland-Palatine is worth deviating from the river to see. It has a host of activities and festivals, mostly focused on its history of fine food and wine. This is the home of the largest wine festival in the world where regional winemakers converge to share their white, red and sparkling wines with connoisseurs in festival marquees each September.

Finally to Oberwesel, with its impressive Shonburg (castle), 13th century defensive walls, timber-framed houses and several churches of note. This is also one of the largest winegrowing centres with the appellation of Schloss Schonburg covering 72 hectares. Sample the local Riesling and the finest German fare at the Michelin-listed Burgrestaurant Auf Schonburg within the castle as the grand finale to this epic Rhine tour. 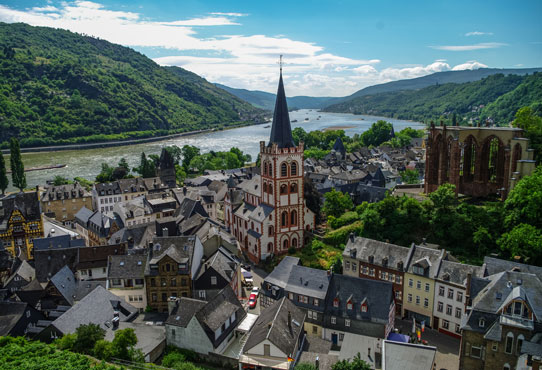