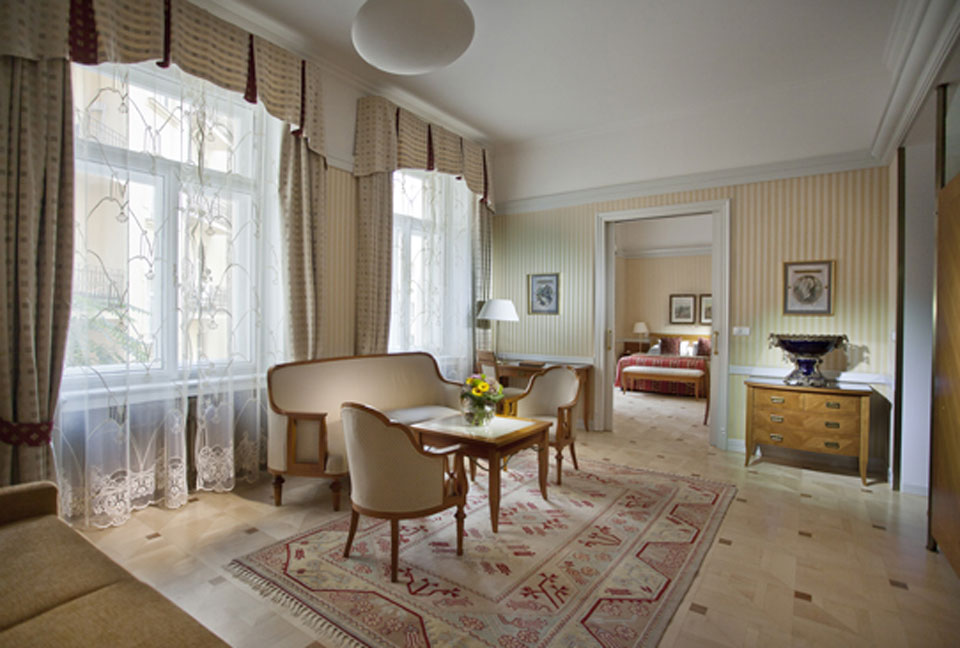 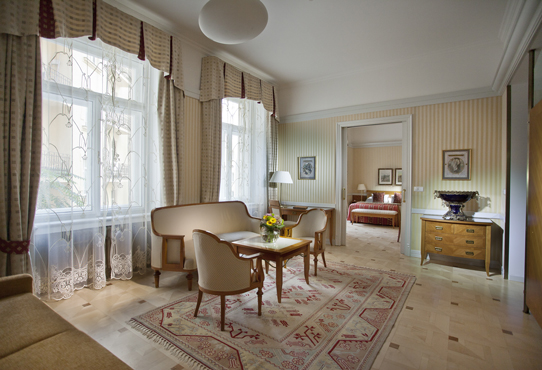 The Hotel Paris Prague has a rich history to match its monumental façade. Immortalised in Bohumil Hrabal’s novel ‘I Served the King of England’ this art nouveau gem in the heart of Prague’s Old Town will appeal to anyone who appreciates historic architecture, luxurious rooms, flawless service and word-class cuisine all under one spectacular roof.

Located in the heart of the Old Town, the Hotel Paris Prague is a monument in its own right with a preserved elegant neo-gothic exterior and splendid art nouveau lobby.

The hotel also counts a number of important Prague landmarks among its neighbours, including the 11th century Powder Tower, one of the original gates to the medieval city and Old Town Square with its astronomical clock and elegant rows of burgher houses.

Nestled on the lively Republic Square, an area bustling with boutiques, galleries and cafés, the Hotel Paris Prague’s proximity to the city’s essential cultural attractions and entertainment could not be better.

Fans of classical music will be delighted to discover that the hotel is next to the Municipal House, another landmark art nouveau building, where performances of the Prague Symphony Orchestra take place in the celebrated Smetana Hall. For opera lovers, Prague’s grandest concert halls, the State Opera House and Estates Theatre, are a picturesque stroll away.

Art enthusiasts will be absorbed by the vast collection of Czech art nouveau painter Alphonse Mucha’s works at the Mucha Museum in the Baroque Kaunický Palace. Or there is modernist furniture and prints on display at the Museum of Czech Cubism, both within walking distance of hotel.

Shoppers will find no shortage of options – Na Prikope, one of the world’s most exclusive shopping districts is on the hotel’s doorstep, its outlets selling a range of high street and luxury brands. Adjacent to the hotel, Palladium shopping mall boasts 200 shops, while Parížská Street is also nearby and is home to numerous luxury flagship stores, including Louis Vuitton, Cartier, Gucci, Prada and Czech designer labels.

For nature lovers, Prague’s green centre, Letná Park, can be visited via one of the multiple tram lines that pass by the hotel and service a number of the city’s outer districts, making the Hotel Paris Prague a great starting point to explore the surrounding area.

Despite its historic legacy, the Hotel Paris Prague is a modern 5-star destination hotel. The 86 elegant guest rooms and luxury apartments are all designed to cater fully to the discerning traveller.

While all of the rooms in the Hotel Paris Prague promise space and comfort, as well as replica art nouveau furnishings, its suites are particularly remarkable for their decadent décor and captivating views of the Czech capital.

At 60 sqm, the Klimt Suite is the hotel’s largest. Named after the Secessionist Viennese painter, the sophisticated neutral tones and strokes of rich colour that highlight this bright and airy space recall the artist’s palette. 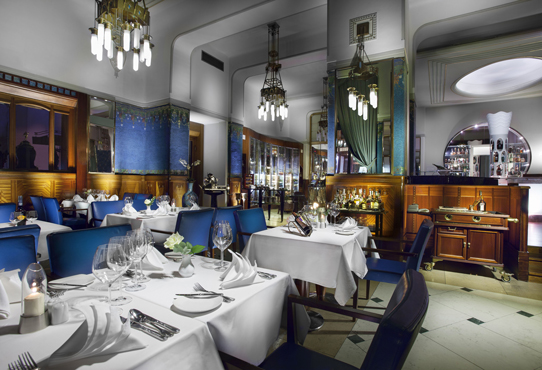 Located on the top floor of the Hotel Paris, the Mucha Suite (40 sqm) is named after the famed Czech painter and captures all of the glamour of a Bohemian artist’s garret with its wooden beams and jewel-toned velvet furniture, contrasting black-and-white-striped wall paper and a sloped ceiling with built-in window. From this vantage point, the views of the Old Town and Prague Castle are unforgettable.

The Tower Suite, poised in the tower of the hotel is the most luxurious option. At 50 sqm this room is strikingly appointed in rich shades of garnet and blue with dazzling gold accents. Smoked-glass bevelled doors separate its sitting areas and bedrooms where guests can admire captivating vistas of Prague Castle and Petrín Hill from the comfort of the king-sized bed or the romantic porthole window seat.

However, it is the dramatic spiral staircase that leads to a terrace with a 360-degree view of the Old Town that is the real jewel in the hotel’s crown.

As a unique option for groups or families, the Mucha and Tower Suites can be joined to create the Royal Family Suite, suitable for up to seven people.

In addition to its 5-star rooms, the Hotel Paris Prague also hosts two culinary gems: Café de Paris and Restaurant Sarah Bernhardt, each a testament to the hotel’s lasting tradition of luxury and service.

The Café de Paris is notable for its celebrated interior – a stunning oasis of carved wood and glass accents – and refined menu of premium beverages and light bites, draws comparison with the grand cafés of Paris in the 1920s.

The business breakfast features a variety of à la carte items; fresh salads, velvety soups, delicate sandwiches or quiche are just right for a light lunch or tea, accompanied by a full menu of drinks from coffee to champagne cocktails.

A selection of heartier meals and continental classics, including steak tartare and grilled scallops grace the menu alongside rustic Czech favourites, such as slow-roasted lamb, savoury goulash with Carlsbad dumplings.

Homemade Charlotte or Valrhona cakes are an exceptionally sweet finish, while the café is widely known for its signature dome-shaped chocolate cake, the recipe for which has remained unchanged since 1904.

The hotel’s lavish Restaurant Sarah Bernhardt with its well-preserved gilded stucco work and blue-split mosaics takes its name from the Parisian actress and singer who was a frequent muse of the iconic Czech painter Alphonse Mucha.

Each course may be paired with a sommelier-selected vintage from the in-house wine cellar Le Vin de Paris, which offers an ample assortment of carefully chosen Moravian and French wines with a particular emphasis on the Bordeaux region.

A prix-fixe degustation option presents a six-course tasting of the most enticing dishes from the Restaurant Sarah Bernhardt menu paired with local wines.

Although perfectly positioned in the centre of Prague, the intimacy of the hotel ensures it feels far removed from the madding crowds and offers a rich insight into the finer elements of this historic city on the Vltava. 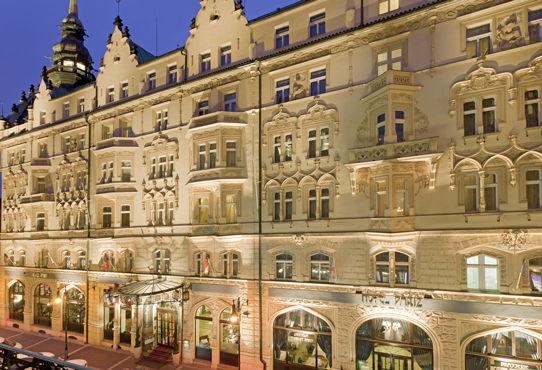