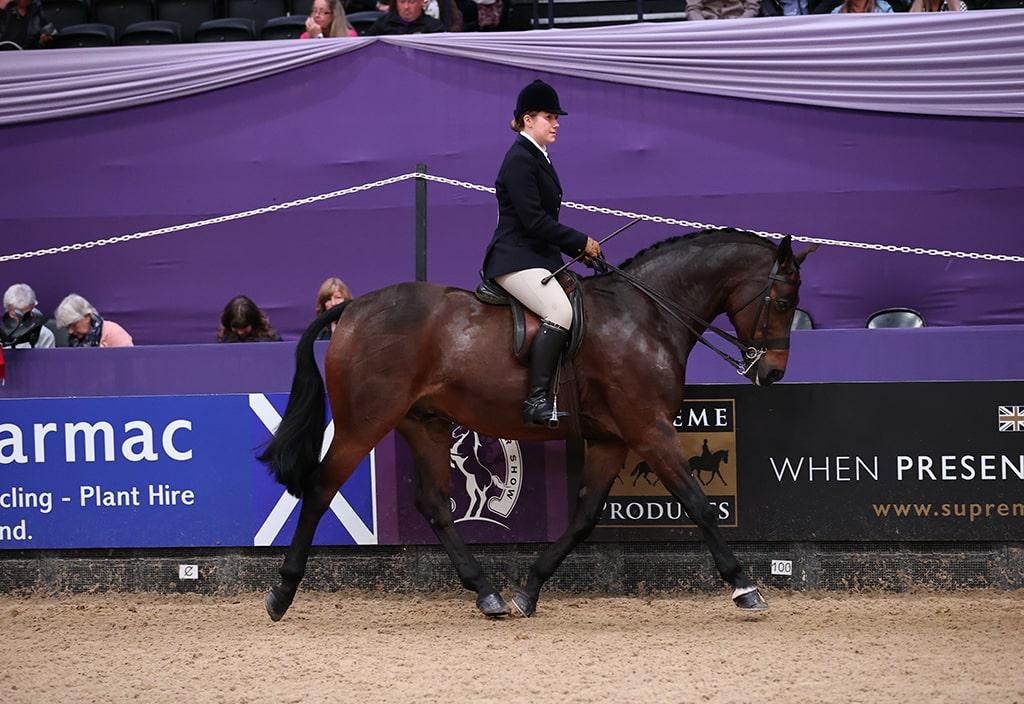 A home-produced horse in his first open class at Horse of the Year Show (HOYS) has been crowned the Hamilton Tarmac Small Show Hunter of the Year Champion on day two of the show at the NEC in Birmingham. Louvaine Rooney is owned and ridden by Megan Cookson, and the pair have qualified for HOYS numerous times before, but never won. Now, in their first time here in an open championship, they beat an impressive line-up of HOYS regulars and previous champions to take the title. Megan’s last win at HOYS was back in 2004 when she won the M&M First Ridden as a child, making the victory even sweeter.

“It’s just overwhelming,” said Megan, who explained that she keeps Rooney fresh by taking him out to a couple of shows a year and then turning him back out with occasional hacking. When asked what makes him able to come out and qualify each year, she answered: “Definitely his personality; he’s bold and cheeky!” The 15-year-old Sports Horse will now be retired from the show ring and hopefully take Megan’s dad out hunting, while Megan hopes to acquire a show cob to compete for herself. Reserve Champion was Lauren Mollard’s nine-year-old Chestnut gelding, Be Smart, ridden by Edward Young.

From early doors until after lunch, the top Mountain & Moorland Working Hunter Ponies from up and down the country put their best foot forward over David Cole’s testing track in the Thor Atkinson Steel Fabrications Ltd. Mountain & Moorland Working Hunter Pony of the Year Championship overat the TopSpec Arena. With a variety of obstacles and a double to finish, concentration and versatility were required right to the end.

The winning ponies in the four different height sections proved that age is no barrier to success with three veterans showing the younger ponies how it’s done, including the overall Champion and winner of the 122cm class, 21 year-old Shetland Carmilo Magician. Owned and ridden by Beatrice Shepherd, this striking gelding held on to the 122cm title from 2019 when the pair finished Reserve Champion overall. They have qualified for HOYS every year for the 10 years they have been together.

Beatrice said: “He’s got the heart of a lion. I’d be lucky to find another as good as him. This will be his last big show and he’ll always have a job teaching children to ride and probably enjoy taking them round little 30cm courses now!” Second was Welsh Section A, Elcon Mr Chatterbox, owned by Alistair Branford and ridden by Gemma Pallett.

Overall Reserve Champion was the winner of the 143cm section. There were tears of joy when, after 11 previous HOYS tickets, Laura Avery and her 19-year-old New Forest pony Willoway Free Spirit finally clinched that red rosette and gave them their first opportunity to ride down the famous tunnel into the Andrews Bowen International Arena.

“He just loves coming out to play at parties,” said a delighted Laura. Laura keeps ‘Spirit’ on her farm, which has no arena, so they do lots of hacking and borrow friend’s arenas for schooling. Laura is a firm believer in the power of New Forest ponies – she also rode the first of the breed to ever take this title at HOYS back in 1997. Spirit has already proven the versatility of the breed, as he and Laura won the BE 90 class at Badminton back in 2017 beating the horses! Second was Victoria Casey’s Connemara, Frederiksminde Volcano.

Claire Devlin’s Blackwood Fernando took the Exc. 143cm section ridden by Alicia Devlin Byrne. Another contender to defy his years, the 24-year-old Connemara made the 12-hour trip over from Ireland with his support team to compete at HOYS for the first time, having qualified at the Irish Pony Society Championship Show. Alicia has ridden ‘Fred’ for 16 years and, having won most things over in Ireland, was thrilled to have the chance to qualify for HOYS. “It’s amazing; he’s a show man and lives for the crowds,” said Alicia. “Unfortunately we haven’t had any crowds over in Ireland for the past two years.” Second was two-time Champion Laburnum Richard owned and ridden by Amy Smith.

There were some very strong clears in the 133cm but today it was the turn of Katy Stock’s Welsh Section C, Rushfield Oh So Smart, to take the honours with Sarah Parker’s Rushhill Diplomat in second. Katy has had ‘Solo’, as he is known at home, for six years and after their first trip to HOYS in 2019 not quite going to plan, this year’s visit was a dream come true. The pair enjoy hacking and arena eventing together.