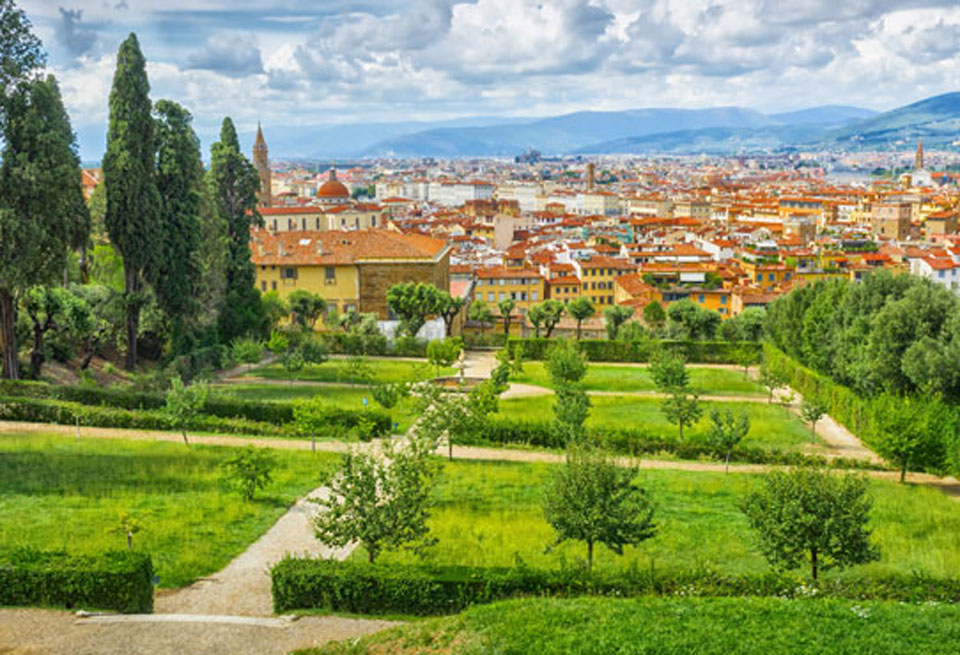 Florence: a guide to the sublime 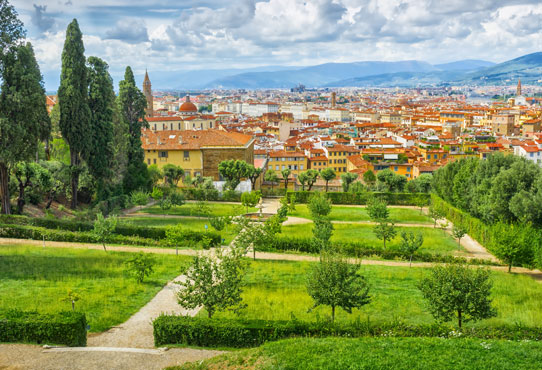 The Renaissance city of Florence is one of Europe’s most magnificent treasures, attracting around 16 million tourists each year. Packed with churches and world-class art galleries, it contains a veritable overload of religious relics, statuary, frescoes and artworks by some of the world’s most revered names. The city is an essential visit at least once in a lifetime, but for those planning a return trip to this artistic capital, there are several less well-known alternatives that you may want to work into your itinerary.

Florence is a compact, traffic-free city that is easy to explore on foot. The shady streets are paved with flagstones laid on the diagonal and the hum of international tourist chatter fills every piazza. The rich smell of leather emanates from colourful street stalls selling everything from belts and wallets to pashminas and watercolour prints. Bars, cafés, gelateria and restaurants line the streets, occupying ancient merchant houses and spilling out across the pavement at every opportunity. 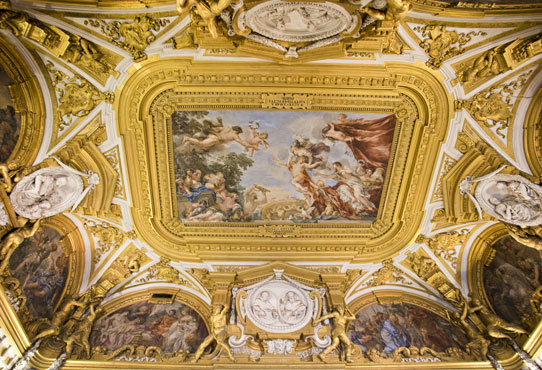 Cradle of Renaissance Frescos in the Palatina Gallery,
Pitti Palace

The Duomo and the Museo dell’Opera

All streets seem to lead to the Duomo, the heart and raison d’etre of this beautiful city. The Duomo or Cathedral of Santa Maria del Fiore, to give it its full title, is one of the largest in the world. Duomo incidentally means ‘home’ not ‘dome’, as most first-time visitors assume. As you stroll up the Via dei Calzaiuoli, the gleaming white corner of the Campanile di Giotto suddenly appears, drawing tourists towards the exquisite marble exteriors of the Duomo, belltower and octagonal Baptistery.

Photographs barely do justice to the detailed façade of the trio of monuments, which are covered in geometric decorations of white, pink and green marble. Add impressively oversized bronze doors and an expansive terracotta-tiled dome and you will understand why crowds of people simply stop and stare at these beautiful medieval masterpieces. They are covered with statues, arches, ornate recessed doorways, rose windows and a decorative roof-line best seen from the Piazza San Giovanni. Entry to the Duomo is free, but queues stretch for hours. The interior of the cathedral is arguably an anti-climax after the mesmerising beauty of the exterior. This huge empty space has soaring pillars, vast mosaic marble flooring and beautiful stained glass windows. The altar area is fenced off, but visitors can gaze up at the breathtaking representation of the ‘Last Judgment’ decorating the interior of the dome.

It is possible to climb to the top of the dome (and the campanile), but queues are long and tickets sell out fast, despite the daunting 463 stone steps. The reward is a privileged close-up of Giorgio Vasari’s frescoed cupola, completed in 1579, and some extraordinary views across the city from the rooftop lantern.

If you have already visited the Duomo, or cannot face the three-hour queue, head to the Museo dell’Opera del Duomo across the square. ‘Opera’ means ‘work’ or ‘composition’ and this building housed the workshops for the craftsmen building the Duomo.

Constructed by the city of Florence in 1296, it has since been used for the conservation and upkeep of the cathedral buildings throughout the centuries. The real surprise is that this four-storey museum houses the original statues, restored artworks, Donatello’s singing galleries, illuminated manuscripts and decorative elements removed from the cathedral, baptistery and belltower. This is the place to find the authentic bronze panelled ‘Gates of Paradise’ – the ones decorating the Baptistery are actually copies! Other exhibits include models of Brunelleschi’s dome (added in the 15th century), informative videos of Medici history and a room dedicated to Michelangelo’s Pieta (‘The Deposition’), which he carved at the age of 70 for his own tomb. This museum is almost better than visiting the Duomo itself.

Art lovers visiting Florence will not want to miss the Uffizi Gallery, one of the major cultural attractions of Florence. The grandiose renaissance building attracts over 1.5 million visitors and is a worthy setting for the world-class artworks within. The halls of this Grand Ducal Palace contain many of the Roman sculptures the Medicis loved to collect along with manuscripts, gems and cameos. Exceptional masterpieces include works by Leonardo da Vinci, portraits by Raphael, altarpieces by Giotto and Cimabue, breathtaking paintings by Sandro Botticelli and Michelangelo’s Tondo Doni panel. At the heart of the building is the octagonal Tribune, a work of art in itself with a shell-encrusted dome, red velvet walls and a stunning marble floor. 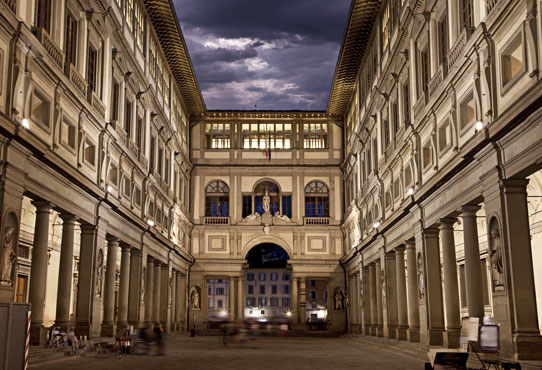 Those looking for an extra special Uffizi experience should book one of the limited places giving access to the Vasari Corridor. This kilometre-long elevated passage linked the Uffizi with the Pitti Palace on the opposite bank of the River Arno, running above the shops on the Ponte Vecchio. It allowed the Medicis to move freely between their private residence and their seat of government without having to brush with commoners. The secret enclosed passageway offers cameos of the city through the circular windows and is lined with artworks and self-portraits by some of the Old Masters.

While the Uffizi focuses on paintings, the Bargello Museum features important sculptures and bronzes by Donatello, Verrocchio, Michelangelo and Cellini, among others. Housed in the Palazzo del Bargello, the architecture alone is worth viewing with its heraldic decorations and family coats of arms dating back to the 13th century. Highlights of the museum include Michelangelo’s ‘Bacchus’ (1470) and ‘Apollo’ (1530), Cellini’s bronze bust of Cosimo I and a whole gallery of works by Donatello.

The Accademia rounds up Florence’s major art museums with its exhibits of Michelangelo’s ‘David’ and his unfinished ‘Slaves’, Giambologna’s stunning ‘Rape of the Sabine Women’ and the serene, ‘Madonna of the Sea’ by Botticelli. Fans of opera and theatre will appreciate the Grand Ducal Collection of 40 musical instruments that featured in court entertainment for the powerful Medici rulers, and now part of the Accademia treasures. 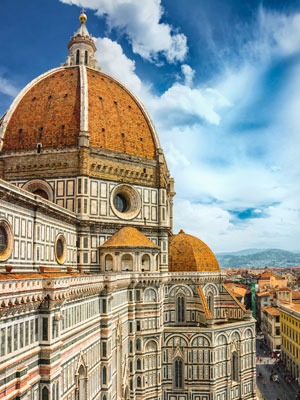 For those who want a more modest helping of artworks balanced with other historic exhibits, architecture and costumes, consider spending a day at the Pitti Palace and adjoining Boboli Gardens. Nothing depicts Medici wealth and power better than this palace, which has something for every taste.

Set in a quiet area of Florence, on the south bank of the Arno, this royal palace has a vast collection of Italian and European masterpieces. Built for Luca Pitti in 1457 by Bruneschelli, architect and engineer of the Duomo, the palace was intended to out-rival the Medici residence. Ironically, it bankrupted Pitti and was immediately snapped up by the Medici family. All subsequent rulers of Florence lived there until 1871, when Rome became the capital of unified Italy.

The Galleria Palatina houses the outstanding Grand Dukes’ art collection in a series of stunning salons featuring frescoed ceilings glorifying the Medicis. It is a great compromise for those wanting to see some Florentine art while skipping the crowded Uffizi and Academia galleries. The lavishly appointed Royal Apartments include tapestries, stucco ceilings, furniture delicately inlaid with coloured marble, and a magnificent throne room. Elsewhere, the palace includes an extensive silverware museum, a modern art gallery and a gallery of costume showing court fashions.

The Pitti Palace overlooks the 111-acre Boboli Gardens which are extremely steep to explore and can be lacking in summer colour. As an alternative, try the recently restored Bardini Gardens on a series of terraces with roses and fountains amidst the established greenery. Closer to Ponte Vecchio, they offer the best views of the city from the Belvedere at the top of the garden.

Pizza and pasta can be found all over Florence, but the local speciality is ‘La Bistecca alla Fiorentina’ or Florentine Steak. It originated from the 15th century festivities when the Medicis donated steaks which were grilled on the street as part of the Feast Day of San Lorenzo.

These steaks are cut from the loin, and the T-bone separates the sirloin on one side from the smaller tenderloin or fillet, delivering both tenderness and taste. High competition between top restaurants in Florence ensures that the quality of this Tuscan favourite is exceptional. After being grilled over a wood or charcoal fire, the steaks are seasoned with salt, pepper and a little olive oil before being rested. They are generally served with a baked potato or steak fries – any other side dish would be superfluous.

For a lighter lunch, head to the Osteria All’ Antico Vinaio on Via dei Neri. Around noon, queues form outside this mouth-watering deli, which specialises in hand-made schiacciata filled to your individual requirements. The giant slab of focaccia is spread with a choice of truffle sauce, artichoke, pecorino cheese or mushroom ragu then piled high with freshly carved slices of cold pork, Florentine meats and salad. It’s a memorable Florentine feast. 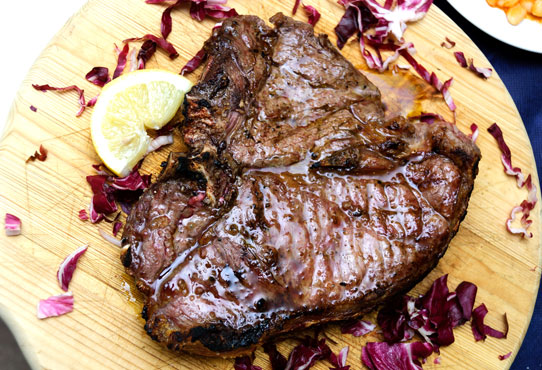