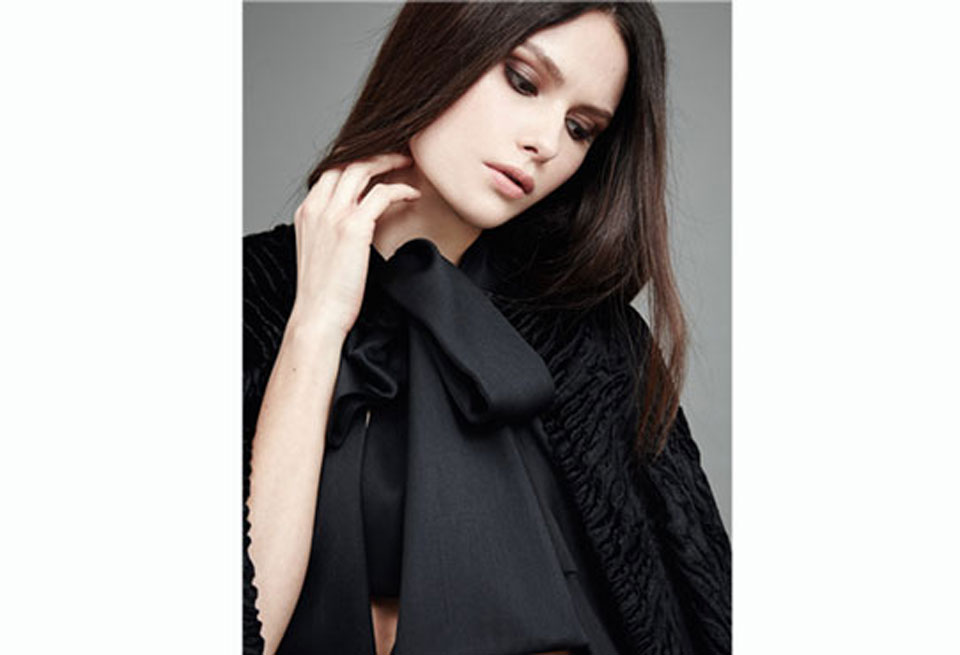 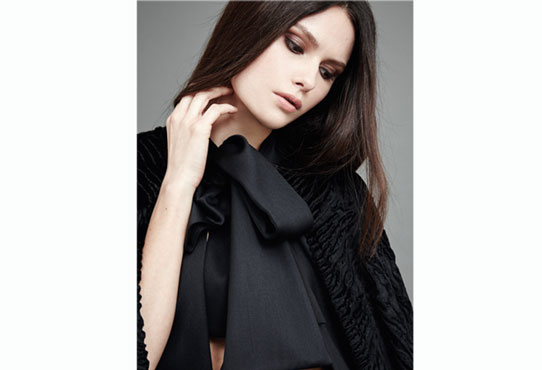 It’s a freezing January afternoon in 1935, and Eddie Bower is in big trouble. The heavy woolen jacket he chose to wear for a fishing trip has proved to be no match for the cold, and is now little more than a vest of solid ice. He’s in a remote location and hypothermia is setting in. If he makes it out of this situation alive, decides Bower, he will invent a new type of jacket, one that will keep him safe from the wintry fingers of the vast American wilderness.

Thankfully Bower did survive, and he did go on to invent a jacket that would ensure his future fishing trips weren’t compromised by near-death experiences. His new garment was light, so it wouldn’t weigh him down. It was insulated by goose down to keep him warm, and quilted to keep the feathers evenly distributed. The cuffs and collar were ribbed to seal out the cold. In 1940, Bower was granted a patent on his design, and the puffer jacket was born.

While Bower and his contemporaries were trekking across mountains in their functional down jackets, they probably didn’t imagine that some 80 years later, the descendants of those same jackets would be swanning down runways as coveted, and highly expensive, designer garments. And yet there they were in the autumn/winter 2016 collections of fashion houses like Balenciaga, Stella McCartney, and Pucci. Some of these new versions are worn off the shoulder. Some are printed in spectacular florals or colourful scenes.

Outerwear, perhaps more so than any other class of garment, necessitates some degree of purpose. It’s what protects us from inclement weather and seasonal unpredictability. It’s non-negotiable, which is the very reason why the aesthetic of the garment is so important: as the autumn days descend into winter, we’re going to be wearing our coats and jackets a lot. So they might as well look good. 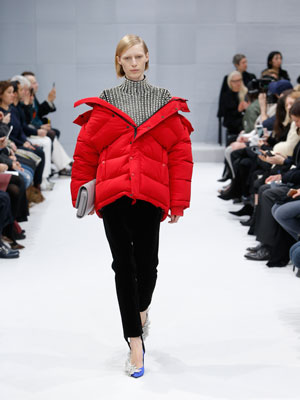 In terms of style, the cape – another to return to the runway – is surprisingly resilient to blunders. Unlike the puffer jacket, its origins are difficult to pinpoint. The act of throwing any material over your shoulders in a bid to keep warm is probably as old as mankind itself, and capes have covered the backs of everyone from medieval monks to Victorian noble women, Julius Caesar and Superman. Fashion may have been on-again-off-again smitten with them in recent years, but the truth is that their practicality cannot be overstated. As any cape convert knows, this is a garment that can fit over anything and everything. And in a season where the layers get more and more plentiful as the weeks go on, that’s something to cherish.

This year’s capes are classic and elegant, typified by structured wool versions at Mulberry and Valentino that graze the shins and offer plenty of protection from biting winds. Other designers have elevated the cape to even more sumptuous heights in rich fabrics and luxe details, like the black faux-fur ‘Veronica’ cape by London-based French designer Jessica Choay. With a 100% wool gabardine lining and oversized bow at the collar, Choay’s key outerwear piece this season is both cosy and pretty. “This cape has been studied to go over our cocktail and evening gowns,” says Choay, “so it had to be practical, elegant and warm.”

In terms of evening wear, Choay has a point. There’s a reason jackets end up thrown over the shoulders in the chilly space between taxi and cloakroom – and the cape presents itself as a much better solution. “I often design capes as they go perfectly with dresses,” explains Choay. “A cape won’t interfere with the shape of the item worn underneath as it doesn’t have sleeves like a coat.” “Plus,” she adds, “I love how you feel embraced and comfy when wearing one.”

Though perfect for dressed-up evenings, the cape is by no means limited to them – even ones as luxurious as Choay’s. “I personally love a cape worn with thigh boots and a short dress or with skinny jeans, as well as over a long dress at night,” she says. 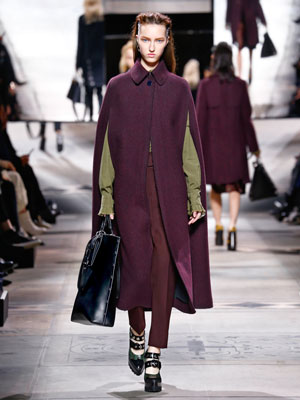 Bleak skies and bitter winds are one aspect of winter that fashion must conquer, but let’s not forget the most unforgiving: rain. For that, it would be impossible to discuss the holy matrimony of practicality and style without touching on the humble mackintosh: the rubberised coat invented by Scotsman Charles Macintosh (the ‘k’ was inexplicably added later) in the early 1800s.

The mackintosh, or mac, was designed with the specific purpose of being waterproof. Function and form have always coalesced, to some degree, within its seams; but with time and the turning of fashion’s tides it’s seen countless updates and reinventions. Take the transparent mac as a perfect example: formed of see-through plastic and voyeurism, its fetishist appeal is implicit. In an iconic scene from 1982’s ‘Blade Runner’, humanoid android Zhora (played by Joanna Cassidy) flees from impending death in a clear plastic raincoat that adds little modesty to her outfit of leather lingerie and boots. The costuming seems to suggest that Zhora is exploited and exposed, and yet its visual appeal is undeniable. 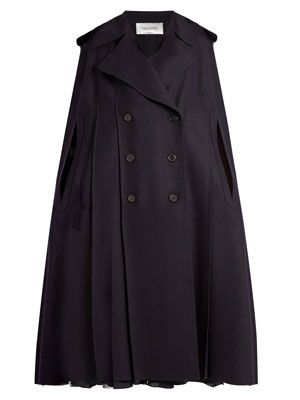 The film was one of the influences behind the autumn/winter collection from CIMONE, a newly-established label by designer Carli Pearson, who formerly held senior positions at fashion houses including Stella McCartney and Alexander Wang. “I love the way in the film there are many 1940s references, which are given a harder edge to make the pieces modern again – it’s very clever,” Pearson explains. “You feel like you are looking at something fresh and exciting, yet somehow it is familiar.”

The same can easily be said of CIMONE’s own transparent mac which debuts on shelves this season. Beautiful in its shape and construction, it can be purchased alone or as part of an ensemble, nested above a chic canvas version. The effect of wearing the two pieces together was carefully considered by Pearson and her team. “The rubber was created to reflect that of a film negative,” she says, “and the garment’s construction and its seam work is further outlined and highlighted when worn on top of its canvas counterpart, much like how holding a film negative up to the light allows you to discover all of the secrets that lay within.”

Aesthetic appeal aside, the transparent mac does proffer an unusual kind of functional benefit. By providing a voyeuristic window into what’s underneath, it allows the under-layers to be deliberately flaunted – and kept dry. Pearson points out that in a country like England – one prone to capricious bouts of rain – natives develop a reluctance to wearing fine fabrics outdoors for extended periods of time. It’s a common paradox: we purchase a coat so incredible that the fear of ruining it sees it transformed into a purely ceremonial object. “I want our clothes to be worn, not to be stored in the wardrobe,” says Pearson. “Our plastic overlays allow these pieces to overcome the limitations of the unpredictable winter season, so that they can be seen in their full glory, protected yet showcased.” 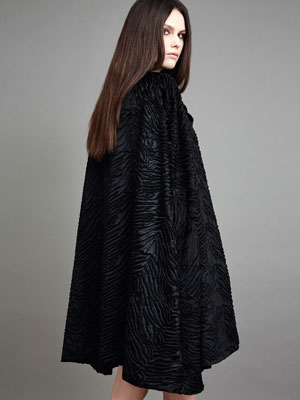 Whether the transparent mac appeals to you or not, there’s no denying that, in the quest for a perfect piece of outerwear, there’s no factor more important than the balance of beauty and practicality; of fashion and function. And as for longevity, well, a timeless style like a quilted down jacket, cape or mac will satisfy the trends – and then transcend them.

“It’s particularly important to invest in a good outerwear piece, as this, above all, is the piece that is seen first,” concludes Pearson, analogising outerwear to a shop window that entices you in. “It’s the one thing that sets the tone to an outfit,” she says. “It’s like the wrapper to a delicious sweet.” Ultimately, it’s an investment that keeps on paying you back.