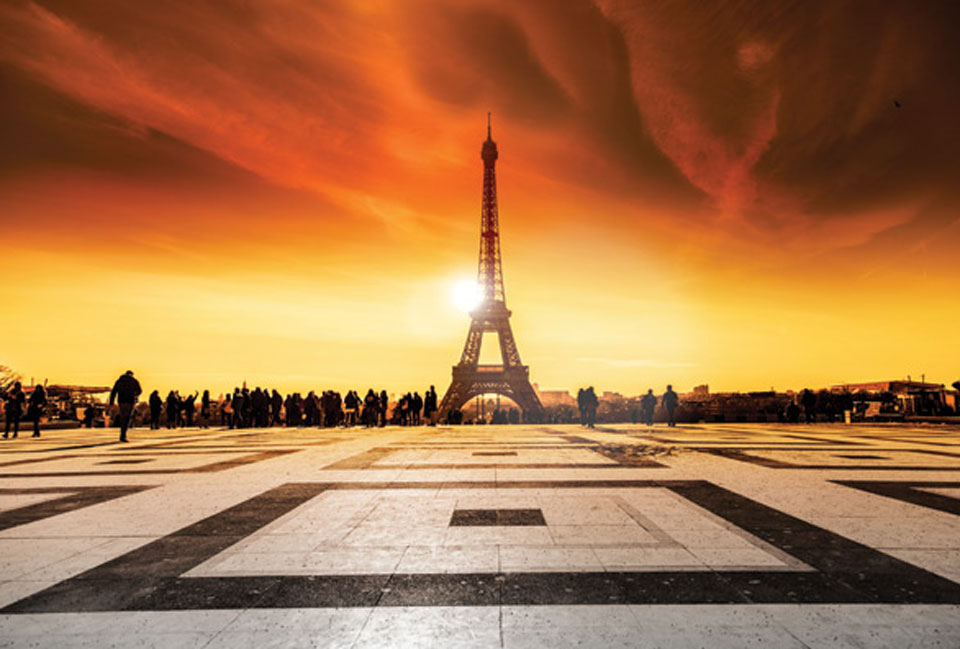 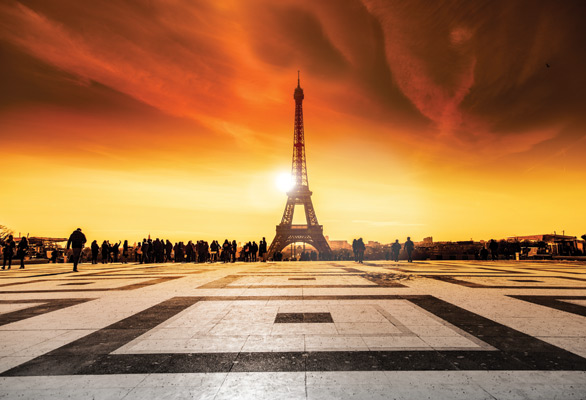 I felt I was in Paris before I was in Paris. It was half past seven in the morning. I was sitting on a leather chair dipping a croissant luxuriously into a cappuccino and nosing at a copy of Le Monde sprawled out on the coffee table next to me. I was in the Business Premier lounge in St Pancras London waiting for the call for my train. The express check-in had taken just ten minutes and I had plenty of time to spare. The two and a half hour journey to Paris was quick, pleasurably helped along by a generous breakfast, limitless coffee on board and the spacious seats, which allowed me to pour over a large map of Paris, planning my trip.

Paris is famous for its bombastically opulent hotels and I was to stay at one of the most dazzling, but also, interestingly, a new kid on the block, which is trying to deliver luxury with an edgy, modern punch. It is hard to beat Hôtel Fouquet’s Barrière’s location on Avenue George-V, just off the Avenue des Champs-Élysées and a few strides away from Louis Vuitton’s flagship store. From the moment I caught sight of Hôtel Fouquet’s Barrière’s daring Haussmanian raw cement facade, I knew the hotel’s visuals were going to leave me short of breath. The entrance did not disappoint with its curved walls in brown leather and reception desk encrusted with a diamond rivière. Overall, I found the hotel’s interior, designed by Jacques Garcia, to be cutting-edge and resolute but sensuous and plush at the same time. The rooms were big (the smallest of the 107 rooms is 37 square metres) and boldly designed in copper, gold and ivory. The huge gold headboards and forties retro tasselled curtains particularly caught my eye. The feel of the Lucien Bar, where we ate a delightful buffet breakfast each morning, decorated in cognac colours, had a modern, jazzy swank.

The hotel certainly does nothing by halves. Every guest gets a butler. Within ten minutes of my arrival in my room, mine, a female, had knocked on the door and given me her card should I need anything. I had filled in a form with my “favourites” before arriving and based on my answers the room had been personalised to my smallest whims. The flowers were red, my favourite colour. The music on offer through the sound system was well stocked with jazz and rock and roll numbers. I had written a preference for the Financial Times out of the newspapers on offer and there it was plonked on the writing table.

My mission to immerse myself in the best of Paris had to take me beyond the dizzying pizzazz of Fouquet’s Barrière, however. On day one, I ventured to bohemian Saint Germaine to pay a visit to one of the city’s most passionate Fromagers, Pierre Brisson, who offers cheese and wine tastings. On a rooftop terrace just by Rue Du Bac metro, he had laid out two tasting tables for myself and my companion and several more tables where he had carefully laid out some of the best cheese that you can get in France. Before the tasting I knew nothing of cheese apart from the fact that I like it. After two hours with Pierre, I was versed on the history of cheese (did you know that the first evidence of cheese making is in Egypt?); the difference between fromage cru and fromage du lait cru; and how to tell a Beaufort from a Comté. Pierre married each cheese that we tasted to a wine, having learned the art of pairing the two from his wine growing father. His skill in this department was clear. At the end of it all Pierre poured us a glass of bubbly, which unsurprisingly had been deliberately chosen for its complementarity with the soft cheeses, and we were invited to have another taste of our favourites.

That evening we dined at Le Laurent, a veritable Parisian institution. The building used to be a hunting lodge and was owned by Louis XIV. However, its best feature is the magnificent garden hidden away from the world by hedges; it could be the most romantic place to dine alfresco in Paris. We went for the seasonal menu, a romping bouquet of summer flavours and daring textures, courtesy of head chef Alain Pégouret who is ruthlessly faithful to creating dishes that follow the seasons. The courses included a cold bouillabaisse packed with almost theatrical flavour. We also had a pigeon from Vendée served with a bold curry and chorizo. The raspberry and almond souffle to conclude was perfectly executed. Le Laurent has almost 30,000 bottles of wines, so we gladly relied on the encyclopaedic knowledge of our sommelier to make recommendations.

After dinner it was straight in a taxi to the Moulin Rouge, which has been the most famous show in town since it was co-founded by Charles Zidler and Joseph Oller in 1889. It was my second visit to the Moulin Rouge. My first encounter was six years ago. In the present day version I found the familiar roar of glitter, colour and unapologetically camp song. There were classic acts like the Can-can. But it was edgier than I remembered with new acts. Highlights included a male roller-skater swinging his female partner in circles inches from the ground. There was also an impossibly flexible middle aged man who, despite his unlikely physique which included slight paunch, was able to hold a female dancer upside down on his head. Then there was the woman who elegantly swam with a gigantic snake in a water tank that suddenly appeared on stage. Closing the show was a ventriloquist who had the audience in fits with his act, which involved bringing members from the audience on stage. 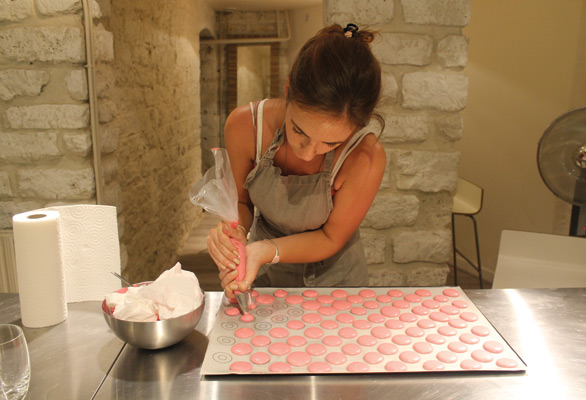 The next day I tackled another Paris institution, the Louvre. It takes just a minute of people-watching in the daunting treasure trove of art to realise that most people who visit it are doing it wrong. It might have partly been the August heat but people seemed to be walking endlessly and aimlessly on blistered feet, instinctively snapping paintings and sculptures on their smartphones in a state of drowsy indifference. They only showed signs of life when someone walked past blocking their photos, when a tut would erupt from their lips. Determined not be one of them, I had booked a private tour with Paris Muse, which offers two and a half hour tours of the best treasures in the museum by an art history instructor. I had been to the Louvre before and, being one of those aforementioned blistered, beaten tourists, had retained little. This time it was different. We joined another couple for the tour. It inevitably included many things the Louvre is famous for: the Mona Lisa, and various pieces by Leonardo Da Vinci and other Italian Renaissance artists including Michelangelo. Our guide Jane provided useful historical context, and pointed out characteristics of the art that made them typical of their era. But we also definitely discovered a healthy smattering of the lesser known treasures of the Louvre – including the oldest art piece in the museum – a neolithic effigy believed to date back to around 7000 BC uncovered in Jordan; pristine gold jewellery which belonged to the bodyguards of the King Darius of Persia; and the Code of the Law of Hammurabi from the Babylonian times.

After the tour we headed to the Tuileries Gardens just behind the Louvre to pick up the luxury picnic hamper that we had ordered in advance with a company called Paris Picnic. A woman was waiting for us at the park gates with a big brown carrier bag and bottle of champagne. We found a secluded stretch of grass between the hedges and laid out our delicious spread of foie gras, soft cheeses, charcuterie, bread, deli salads, cherries and peaches, fruit cake and macaroons. The food was luxury, authentic and seasonal, and in the August sunshine a perfect way to wind down post-Louvre. 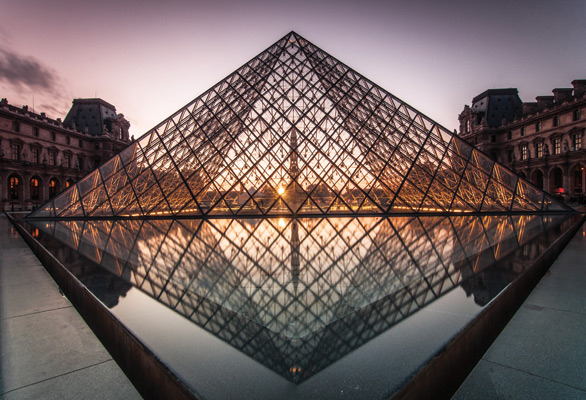 After an afternoon roaming the Tuileries, the Place de la Concorde and the Champs-Élysées, it was time for another gut-busting gastronomical experience. This time at one of Paris’s lesser known but truly spectacular Michelin experiences. The foie gras we had to start, served with a raspberry and fresh pistachio marmalade, was particularly delightful, both rich and velvety and packing a punch with the fruit. We also had a sea bream carpaccio as an entrée, served with a pineapple and nori leaves and a passion fruit vinaigrette, again full of bold flavour. The main of lobster from the Brittany coast in a litchi broth was subtle and inventive. The chef, Gabriel Grapin, obviously has a playful attitude to food, refreshing as visiting Michelin institutions in Paris can be a stuffy, serious affair. The sense of humour was most evident in the dessert menu, which included homemade ice cream. When I ordered the strawberry and meringue option, it was served in an old fashioned ice cream glass and immediately transported me back to childhood. The service was sharp, attentive and informed, especially from the sommelier who paired wine with our food beautifully.

Our final day in Paris, a Sunday, was spent walking along the banks of the Seine and exploring the market at Bastille, where we were proud to be able to recognise many of the cheeses that we had tasted with Pierre on Friday. Our last stop was on the Left Bank at a cooking school called Le Foodist, to learn how to make what no self-respecting visitor could leave Paris without trying: macaroons. There were six of us in the class so we made three different flavours in pairs – vanilla, chocolate ganache and lemon ganache in three colours that we chose – purple, pink and yellow. The equipment was pristine and high quality and the teacher was good humoured, attentive and helped us particularly well in terms of timing and coaching us in the technique for squeezing out the meringue mixture to make the perfectly round macaroon shells.

To our surprise, the macaroons came out really well. Upstairs a table had already been beautifully laid out for tea and we sat down with our macaroons to enjoy an Asterix-inspired storytelling by Le Foodist owner Fred. “If you really want to understand the French, read Asterix,” he quipped as we munched on our macaroons. It was a quirky, colourful end to our break, which for me summed up the spirit of Paris: flamboyant, cultured, and pure genius really.